My theatre diary: Musicals Women on the Verge, Bat Boy and Grand Tour

My theatre diary: Musicals Women on the Verge, Bat Boy and Grand Tour 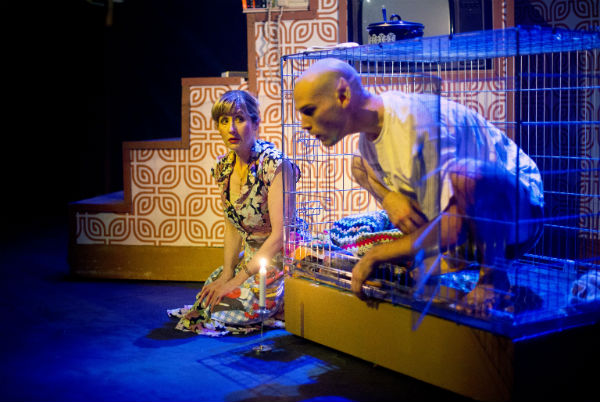 I caught you up on my new year playgoing earlier this week, now let me turn to some tuners on offer. Though vastly different in scale and subject matter, these three musicals do have two key things in common: they are all Broadway-born and must-sees for musical buffs.

As usual, I’ve listed productions in closing/booking date order. Note, the first finishes at the end of January – don’t delay!

I remember seeing the UK premiere of Bat Boy at the Shaftesbury Theatre in 2004, which came three years after its Broadway premiere. I don’t remember it being quite as bonkers as it appears in this first major London revival, which opened at Southwark Playhouse on 14 January, ten years to the very day that it closed in the West End.

Not since Jerry Springer The Opera have rednecks run such riot in Theatreland. Here, set in a small town in West Virginia, a creature that’s half-boy, half-bat is taken in by veterinarian Dr Parker, his wife and hormonal teenage daughter – and the locals, and their withering cattle, are sure on edge about it.

“I’ve never going to get another pet, ever.”

In fact, let’s call it Jerry Springer meets Let the Right One In (though seriously lacking in stage blood) …. or Edward Scissorhands without the fangs, if you will.

Rob Compton brings extraordinary physicality to the title role (owing a debt to role creator Deven May, who he saw perform four times in the West End production), Lauren Ward is a mumsy, vocal knockout as Mrs Parker and there are some eye-catching cameos, not least from Simon Bailey as an uproarious Christian evangelist. Morphic Graffiti’s Luke Fredericks directs. 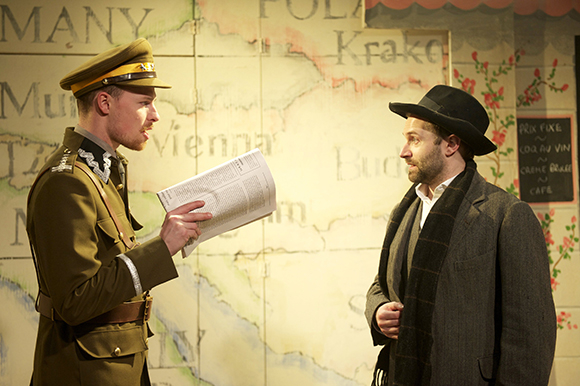 The Grand Tour had its Broadway premiere in 1979, marking the return after nearly a decade’s absence of legendary composer/lyricist Jerry Herman (Hello, Dolly!, Mame, La Cage aux Folles). Thirty-six years later, it finally gets its European premiere at the tiny Finborough care of producer Danielle Tarento and director Thom Southerland, whose previous hit Off-West End reinterpretations of Broadway musicals include Herman’s Mack and Mabel, as well as Titanic, Parade and Victor/Victoria.

“There are times when one must retreat in order to advance.”

Regardless of the Herman association, The Grand Tour is the duo’s most obscure restoration project yet. There’s good reason this show hasn’t been revived more often – namely, the dated and wildly politically incorrect book by Michael Stewart and Mark Bramble.

A comedy set in 1940 France, The Grand Tour centres on a Jew, a general and a country lass (sounds like a punchline waiting to happen, right?) who, against their prejudices, team up to flee the Nazis and smuggle important military documents out of the country: “Do it for Poland”.

“Though life is based on compromise I know,
I never thought I’d have to stoop this low.”

There are naff lines and scenarios aplenty in an evening that feels like a cross between The Sound of Music, Barnum and Pippin, with a dash of Fiddler on the Roof. But Southerland and choreographer Cressida Care make inventive use of the Finborough’s confined space, the cast – led by the sensational Alastair Brookshaw – give it lots of wellie, and Herman’s score is full of catchy tunes. (I still can’t get “You, I Like” out of my head – see my Vine below.)

The Grand Tour continues at the Finborough Theatre until 21 February 2015. 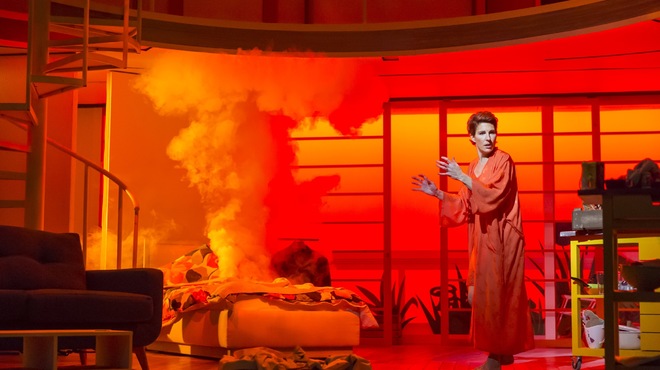 Women on the Verge of a Nervous Breakdown

Pedro Almodovar, the creator of the eponymous 1987 film on which Women on the Verge of a Nervous Breakdown is based, has given his blessing to this musical and its radical downsizing since its short-lived 2010 Broadway premiere. He’s hailed it as a “tribute” to his country and the city of Madrid and has praised its leading ladies.

“He always loved my gazpacho.”

It would be churlish of me to disagree – and, luckily, I don’t. As I didn’t see the Broadway outing and watched the film so many years ago that the memory has faded to near-non-existence, I can only judge on what’s before me onstage at the Playhouse. And I like what I see: larger-than-life female characters, a riot of technicolour set changes, barn-storming performances and a great big heart.

Tamsin Greig is a warm and wonderful Pepa (though my mind insisted on tacking on ‘Pig’ every time I heard her name – and I don’t even have kids, egads), with a surprisingly sultry and sensuous singing voice. And Haydn Gwynne mines comic gold as the de-institutionalised wife of Greig’s lover, Jerome Pradon’s unapologetic cad Ivan.

“You’re longing for his touch,
A little is elixir, but too much is far too much.”

Elsewhere, stellar supporting ladies include Anna Skellern as Pepa’s dim-witted model friend, Seline Hizli as a ball-busting virgin and Willemijn Verkaik (well known to Wicked fans as Elphaba) as an icily bewitching lawyer. And Ricardo Afonso sings and strums a mean guitar as a narrating taxi driver – though why he’s the only one with a Spanish accent, I couldn’t say. (Ditto on the point of the wandering matador?)

Women on the Verge isn’t perfect – while there are some nice Spanish rhythms and smart lyrics, particularly on the physical pain of heartbreak, the songs aren’t memorable – but it is fiesta-like fun.

And, big kudos to the marketers who plastered the front-of-house with a life-sized catwalk of the show’s stars – I wasn’t the only one snapping #theatreselfies with Tamsin, Haydn and the gals!

For more reviews, interviews, news, gossip and other first night coverage, check out my Press Pass.

Women on the Verge of a Nervous Breakdown is currently booking at the West End’s Playhouse Theatre until 9 April 2015.