My theatre diary: Multitudes, Gods and Monsters, Kill Me Now, How I Learned to Drive and Boa

Home-My theatre diary: Multitudes, Gods and Monsters, Kill Me Now, How I Learned to Drive and Boa

My theatre diary: Multitudes, Gods and Monsters, Kill Me Now, How I Learned to Drive and Boa 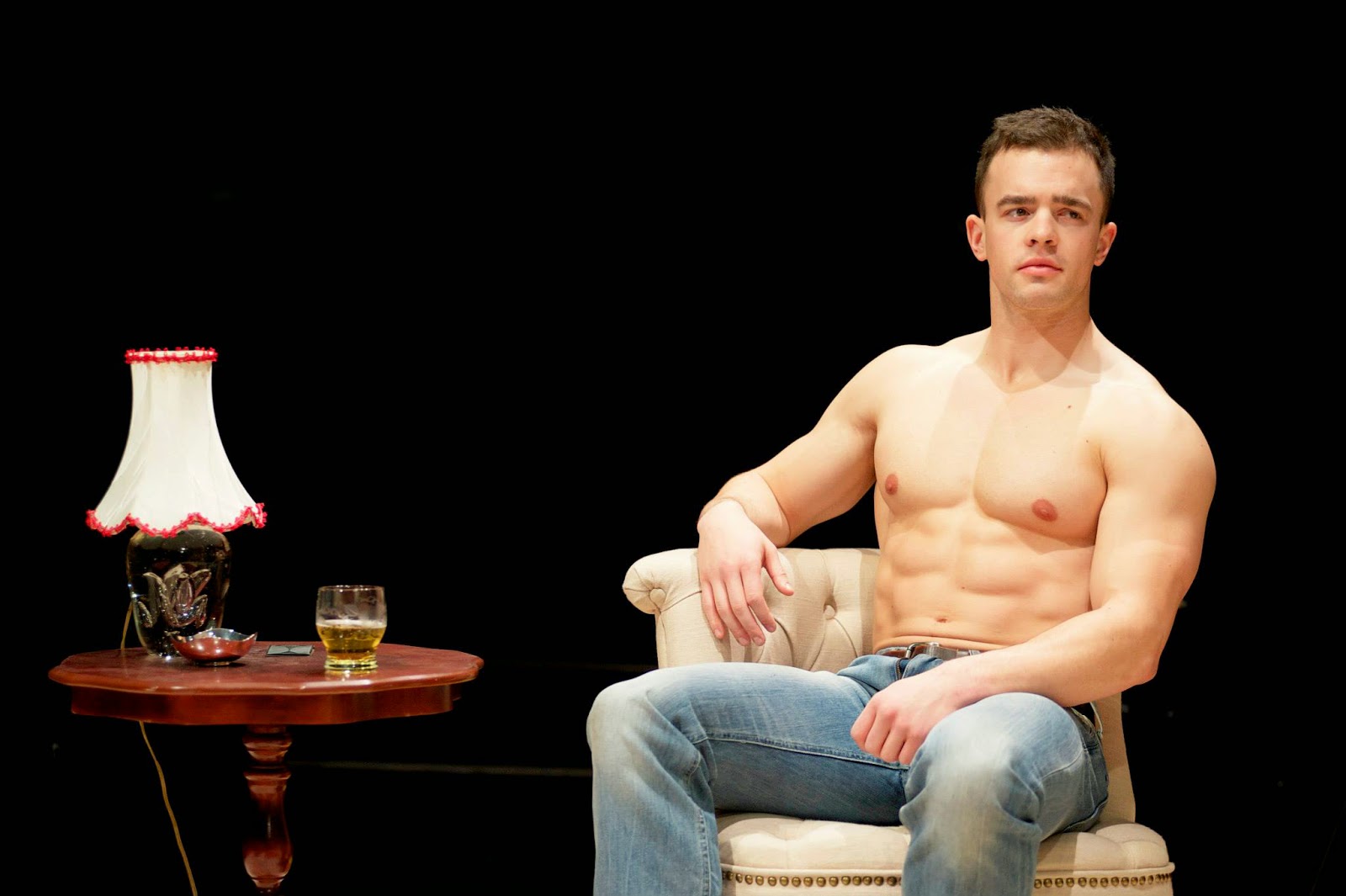 Will Austin as Boone in Gods and Monsters at Southwark Playhouse. Photo: Annabel Vere

The Off-West End play has very much been the thing for me in the past few weeks of theatregoing. Here are five (four of them brand-new plays) worth squeezing into your theatregoing calendar this month – and when I say this month, I do mean this month.

As usual, I’ve listed productions in closing date order, all before the end of March. Note, the first two actually finish this week – so, seriously, don’t delay!

English screen and stage director James Whale did a lot more than Frankenstein (and other classic horror films including Bride of Frankenstein and The Invisible Man), and Gods and Monsters goes some way to fleshing out his life and contributions. Writer-director Russell Labey doesn’t copy the 1998 Oscar-winning film of the same name (which starred Ian McKellen and Brendan Fraser) but goes back to the source material, Christopher Bram’s novel Father of Frankenstein, for this sensitive portrayal of a man who, unusually during the height of his career in the 1920s and 1930s, was openly gay. Now, it’s 1950s Hollywood, an aged Whale is losing his mental faculties, lusting after his gardener and considering suicide.

“Feel free to make use of the pool. We’re quite informal here. No need for a swimsuit.”

“I can’t believe the man who made Frankenstein is a homo.”

Ian Gelder leads the cast, out-Ianing McKellen as a witty and dignified Whale, tormented by ghosts of the past. He’s surrounded by attractive young men who regularly get their kit off – Will Rastall, Joey Phillips and the incredibly gym-tastic Will Austin (who plays Boone, the gardener, originated onscreen by Fraser). Lachele Carl offers whipsmart support as the all-seeing and not-so-quietly disapproving housekeeper.

Gods and Monsters finishes its limited season at Southwark Playhouse on 7 March 2015. 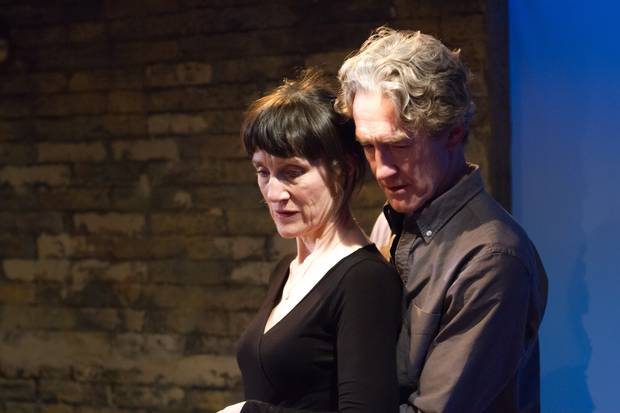 Harriet Walter and Guy Paul in Boa at Trafalgar Studios 2.

Harriet Walter is a Dame for good reason: she’s one of our very best stage actresses. And Boa is clearly a personally important project for her as it allows her lots of quality time onstage (and in rehearsal) with her real-life American husband Guy Paul. The first time onstage together in London and in a world premiere, directed by Hannah Price.

“It was all I could do not to weep with gratitude that you had found me.”

“The height of transcendence is having truly loved another person.”

Was Clara Brennan‘s two-hander specially written for them? It certainly feels like it could have been. Paul and Walter play an American husband and his English wife – Louis, a Pulitzer Prize-winning war correspondent, and Boa (short for Belinda), an eccentric dancer – charting the ups and downs of their 20-year relationship and the tragedy that finally (?) tore them apart. There’s rather too much telling rather than showing, and it’s all done in a very linear fashion.

However, there is a surprise twist at the end, which allows Walter to let rip with full emotional force. And, in the intimate 98-seater of Trafalgar 2, being so up close and personal with an actor of Walter’s stature is thrilling. Clearly, the couple enjoy working together. They’re next off to Stratford as part of the cross-cast company performing Death of a Salesman and King Lear.

Boa finishes its limited season at Trafalgar Studio 2 on 7 March 2015. 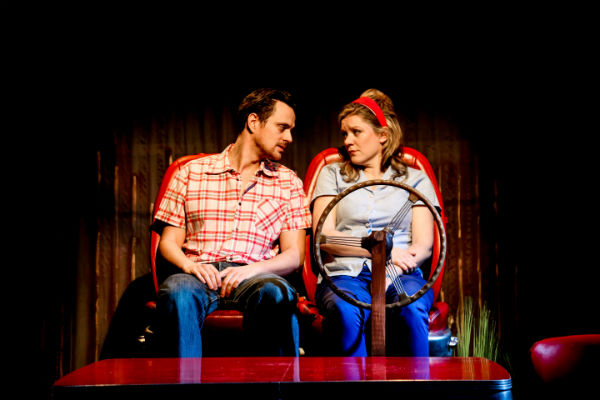 William Ellis and Olivia Poulet in How I Learned to Drive at Southwark Playhouse.

How I Learned to Drive

How time flies – or, to stay consistent with the metaphor, how it races. It feels fairly recently that I saw the London premiere of Paula Vogel‘s How I Learned to Drive, starring Helen McCrory and Kevin Whateley, at the Donmar Warehouse. In fact it was 1998 – 17 years ago. I should adjust my rearview mirror, as Vogel might say.

In fact, what she did say to me when I tweeted about this first London revival – a message I never would have received back in the way-pre Twitter days of 1998 – was a message for the cast to enjoy “one helluva ride”. Which is exactly what the company seem to be doing in Jack Sain‘s production. Olivia Poulet and William Ellis are L’il Bit and and her Uncle Peck, whose relationship is far from straightforward. Bryony Corrigan, Holly Hayes and Joshua Miles flit in and out as multiple, cracked cracker family members and other bit characters in a cartoonish version of a Greek chorus.

“If I have both hands on the wheel, how will I defend myself?”
“I will never touch you when you’re driving a car.”

Don’t be put off when you hear this is a play about paedophilia. As I explained to my partner Peter, it’s a comedy – no, really. And, one in which, you’re never sure who the real victims and villains are. I’m glad that a new generation in London is having a chance to learn to drive in Vogel fashion.

How I Learned to Drive continues at Southwark Playhouse until 14 March 2015. 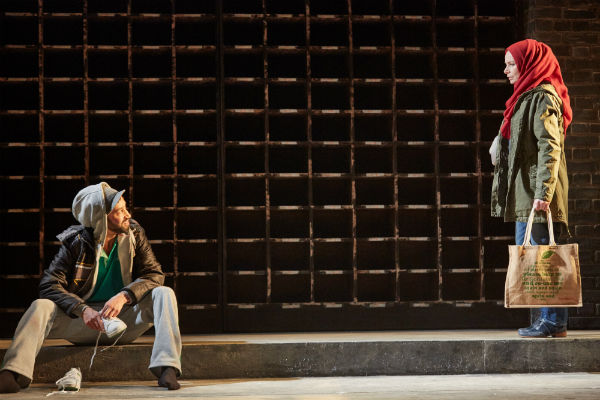 Asif Khan and Claire Calbraith in Multitudes at the Tricycle Theatre.

Well done to Tricycle Theatre artistic director Indhu Rubasingham, undeterred by the flak received over last year’s Jewish film festival, for commissioning and helming this new play about Islamophobia and radical extremism in modern Britain. John Hollingworth’s Multitudes is set in Bradford on the eve of a Tory party conference, where anti-war protesters are gathering and trouble is brewing in the household of local politician and liberal Muslim Kath (Navin Chowdry).

“The multicultural project has never worked, we just pretend it does.”

As Kash’s white girlfriend (Clare Calbraith) converts to Islam, much to the chagrin of her olde England mum (Jacqueline King), his teenaged daughter Qadira (Salma Hoque) is being converted to a more hardline course of action, that puts both herself and her dad’s career in peril. Hollingworth captures the fiery anger and feelings of alienation at both ends of the spectrum, with especially combustible performances from King and Hoque. (Special mention, too, to the truly shape-shifting turns made by Asif Khan and Maya Sondhi in myriad supporting roles.)

With daily stories in the news about Isis-bound ex-pats, the story could not be more topical. And it makes me think again how important the PR battle is in the mislabelled “war on terror”, as I (and Caitlin Moran) recently blogged. It’s important that we write and listen to the good news stories about Islam and faith, rather than be misled by the “bad” news. And it’s imperative that we recognise the difference between “enemies inside the gates” and natural allies.

Multitudes continues at the Tricycle Theatre until 21 March 2015. 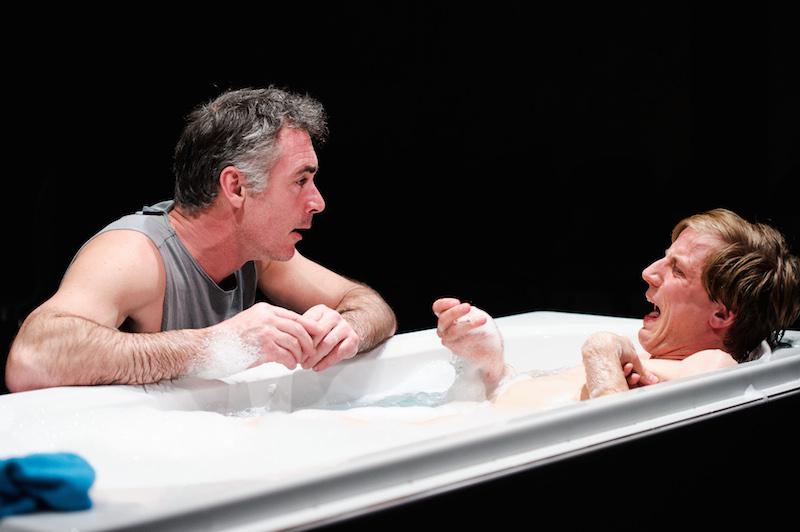 Greg Wise and Oliver Gomm in Kill Me Now at the Park Theatre.

The clue is in the title, and, no it’s not ironic. In Brad Fraser’s new play Kill Me Now, Greg Wise, in a rare but welcome London stage appearance, plays the father of a severely disabled son, who is so desperate, especially after succumbing to his own painful physical disabilities, that he wants to die.

It’s a difficult subject and a difficult watch, especially at times when – no holds barred – Wise carries, dresses and undresses, bathes and, yes, masturbates a contorted and shrieking Oliver Gomm as 18-year-old Joey. Despair here is pretty unremitting, save for some comic interludes care of Joey’s “mildly retarded and well hung” friend and extra carer Rowdy (Jack McMullen).

In a programme note, Fraser says he was inspired to write the play based on experiences with disabled family members. It’s a shame then that no disabled artists were involved in the creative team or cast (Gomm’s performance is incredible, but when he steps out of his wheelchair for the curtain call, you can’t help but feel a little conned).

Though many in the audience around me were moved to tears, the lack thereof made me question the authenticity of the portrayal. Others far closer to the subject have also railed against the play, including Dea Birkett, in her excellent Guardian Comment is Free piece, and theatre director Stephen Unwin, both themselves parents of disabled children. I leave you to judge for yourself.

Kill Me Now continues at the Park Theatre until 29 March 2015.