My theatre diary: Guards at the Taj, Junkyard, Waiting for God and Sea Fret

My theatre diary: Guards at the Taj, Junkyard, Waiting for God and Sea Fret 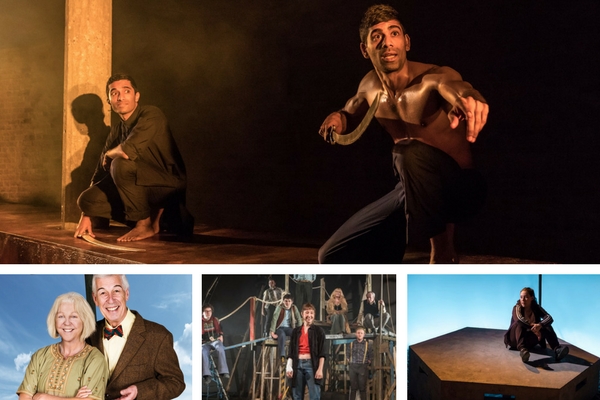 Clockwise from top: Guards at the Taj, Sea Fret, Junkyard and Waiting for God.

Here’s a round-up of productions I’ve seen it recent weeks which I haven’t already covered in Press Passes (do please dance your way as soon as you can into seeing both An American in Paris and 42nd Street in the West End) or other blogs. What do all four of these have in common? (I like to make links, as you probably know!) They are all four premieres.

Rajiv Joseph‘s Guards at the Taj had its world premiere at New York’s Atlantic Theater in 2015 and now gets its European premiere, directed by Jamie Lloyd in his Bush debut, as the inaugural production in the beautifully remade Bush Theatre after its year-long, £4.3million makeover. It seems appropriate to celebrate the Bush’s architectural feat with a play about an architectural wonder: the Taj Mahal. 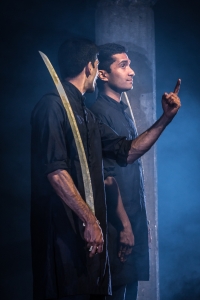 Darren Kuppan & Danny Ashok in Guards at the Taj

The story centres on two lowly guards (played by Danny Ashok and Darren Kuppan) who are amongst the first to view the unrivalled beauty of the marble mausoleum that the emperor Shah Jahan had built, over the course of 16 years, to house the tomb of his wife in 17th-century India – and given the grisly duty of ensuring that nothing can ever be built again to rival that beauty.

In its depiction of two pawns caught up unwillingly in the machinations of the rich and powerful and its philosophical banter, the piece reminds me a lot of Tom Stoppard‘s Rosencrantz and Guildenstern Are Dead – though concentrated into a two-hander and with very different cultural references. Guards at the Taj continues at the Bush Theatre until 20 May 2017.

Only a week left to see Junkyard, a rare – and unique – musical offering from Headlong, which I caught at its final tour stop, Kingston’s Rose Theatre, where it continues until next Sunday 30 April 2017.

Jack Thorne, who has made his musical debut penning Junkyard’s book and lyrics to Stephen Warbeck‘s score, is riding stratospherically high after winning an Olivier this month for his work with JK Rowling on Harry Potter and the Cursed Child. But regular theatregoers know, he’s been writing for the stage for many years. For me, Junkyard is a fascinating follow-up to his 2015 play, Hope at the Royal Court, which centred on a local government council who rebel against implementing the Conservative Government’s austerity cuts.

Junkyard is inspired by Bristol’s real urban playground movement of the 1970s, when numerous brownfield sites in the city were reclaimed for do-it-yourself junk playgrounds for disadvantaged children. An epilogue from the show’s narrator, punchily played by Erin Doherty (who I happily saw win the Stephen Sondheim Society’s Student Performer of the Year two years ago), points out that the remaining playgrounds face closure from austerity cuts today. 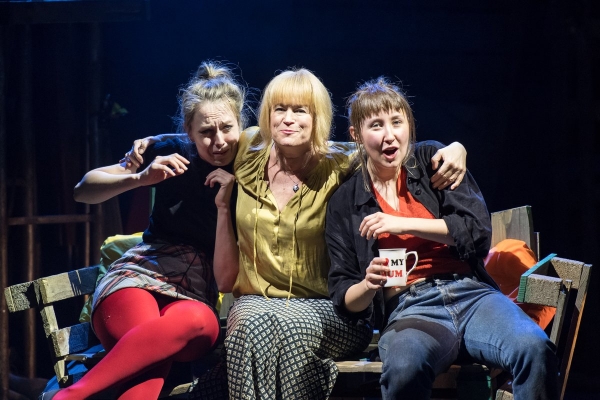 While Junkyard focuses on stimulating young people and their imaginations, Waiting for God is concerned with the quality of one’s later life – though it does so without taking itself or its subject too seriously. Michael Aitkens has adapted his own hit 1990s BBC sitcom for a standalone play that revolves around the autumn romance between Diana and Tom (played by Nichola McAuliffe and Jeffrey Holland), who meet at the Bayview Retirement Home. (I was pleased to interview the author and stars and write the programme note for this production. Watch out later this week for those.)

Waiting for God is the first play at Letchworth’s new Broadway Theatre, which is in fact the town’s cinema which the clever town planners are now doubling up as a theatre to appeal to local audiences who’ve lapped up NT Live broadcasts. It’s also the start of the production UK tour which now continues until 8 July to Eastbourne (near where the action is set), Guildford, Ipswich, Bath, Malvern, Poole, Windsor, Blackpool, Oxford and Salford.

The final new play I want to tip my hat to is Sea Fret. Unfortunately, it’s just this weekend finished its limited season at London’s Old Red Lion Theatre, but do keep an eye out for its author Tallulah Brown – the next Barney Norris? – and the Loose Tongue theatre company. There’s a lot of promise there.

Scroll down for more of my thoughts on each of these productions from my on-the-night tweet reactions.