My theatre diary: From tears to laughter with The Crucible, The Events, Invincible and Shakespeare in Love

Home-My theatre diary: From tears to laughter with The Crucible, The Events, Invincible and Shakespeare in Love

My theatre diary: From tears to laughter with The Crucible, The Events, Invincible and Shakespeare in Love

I’m really doing well for play choices in July. Don’t let the warm weather put you off catching these compelling productions, which scale great heights and depths of emotion. (Apart from the entertainment, most of these theatres were lovely and cool on the hot summer evenings I attended. So you’ll get a respite from the heat as well.)

I recommend all four of these productions and list them below in closing date order. Don’t delay with the first two in particular, both of which finish their limited seasons in the coming weeks. 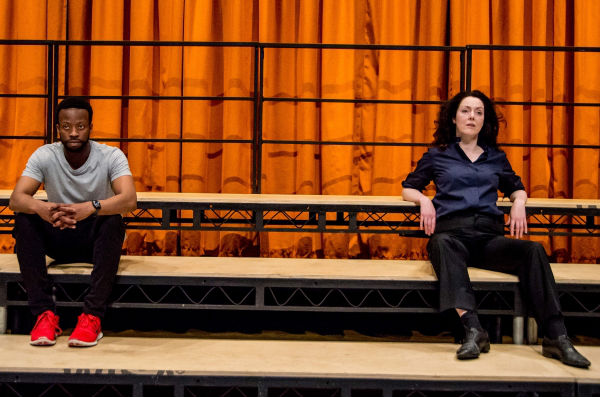 David Greig’s play for Actors Touring Company was a Fringe First winner at the Edinburgh before transferring to the Young Vic last year. Unfortunately, I missed that first outing so was determined to see it this time around.

Derbhle Crotty is Claire, a minister and choirmaster in a small town, tormented by a terrible mass murder that occurred there – “the events” of the title, which we learn more detail about over 80 minutes. Clifford Samuel is a highly watchable shape-shifter, taking on a variety of roles including Claire’s lesbian partner, a psychiatrist, a racist politician, the perpetrator’s father, his classmate and the confused, teenaged murderer himself.

“If I’m to make my mark on the world, my only means are art or violence – and I was never any good at drawing.”

“Nothing about faith is easy, you know that. Events test us.”

The two actors are supported by pianist Magnus Gilljam and joined each night by a different local London choir, who provide a backdrop of extras and beautifully stirring choral accompaniment. It’s an incredible, inventive exploration of faith and forgiveness, not to mention a demonstration of the healing power of music. ATC artistic director Ramin Gray directs.

The Events finishes its limited season at the Young Vic’s Maria Theatre on Saturday 2 August 2014. 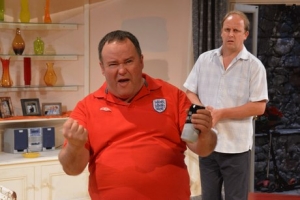 After scoring a hit at the Orange Tree earlier this summer, Torben Betts’ Invincible has transferred direct to the St James for an extended season. On paper, it just sounds like fun, an excruciating, class-clash, dinner-party type of fun. Well-educated left-wing liberals Emily and Oliver downsize from London to a small town in the north of England where, determined to meet ‘real people’, they invite their neighbours, footie-loving Alan and his dolly-bird wife Dawn, round for a meal.

“Your father worked for Barclays Bank.”
“That does not make him the anti-Christ.”
“I think it does.”

The first half serves up just the level of hilarity you expect, with debates about Karl Marx, abstract art and the English football team dumbfounding one couple or the other. But after the interval, the play takes several surprisingly dark and touching turns as the London interlopers make an unintended impact and the two women discover they have more in common than they thought.

It’s a mouth-watering mix of Alan Ayckbourn, Edward Albee with a side salad of Educating Rita. And under Ellie Jones’ direction, the four-strong cast – Laura Howard and Darren Strange as the London escapees and Daniel Copeland and Samantha Seager as the salt-of-the-earth Northerners – play their roles to perfection. Though I’m not sure Copeland comes up for breath as motor-mouthed but loveable lager lout Alan.

After seeing the show on opening night, I got dragged into the vox pop video! I hope Invincible has another life beyond the St James. It’s a real commercial crowd-pleaser. Any theatres that need fillers in the West End?

Invincible continues until 9 August 2014 at the St James Theatre.

I can often be seen wiping away tears at a good drama, and Yael Farber’s production of The Crucible at the Old Vic was no exception. This is my favourite Arthur Miller play. The final scene where John Proctor pleads with the Court to allow him to ‘confess’ to witchcraft without betraying his fellow accused gets me every time.

How can I live without my name? I have given you my soul. Leave me my name.

What I was not prepared for was the effect on the people around me. I have seen countless wonderful plays over the years, and this is my third production of The Crucible in less than ten (the RSC production with Iain Glen in 2006 and the Open Air revival just two summers ago), but I can honestly say I have never seen an audience so visibly moved. 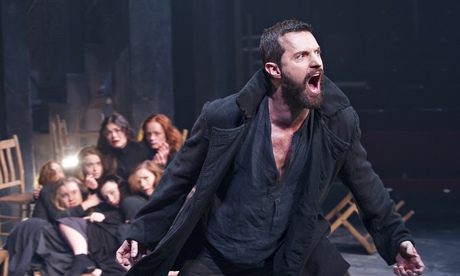 Richard Armitage in The Crucible at the Old Vic

About 20 minutes from the climax, my seat started shaking – it was the middle-aged businessman next to me sobbing uncontrollably. He could not stop and struggled to muffle the sound. At the curtain call, I hugged him and handed him a tissue as consolation. Then I quickly doled out the rest of my to his daughter and a group of women in the row in front, all with tears still streaming down their faces.

What caused such a reaction? There are some undeniably powerful performances from Richard Armitage as John Proctor, Anna Madeley as his dignified but frosty wife Elizabeth (“an everlasting funeral marches round your heart”) and Samantha Colley as a terrifying Abigail Williams.

But what really sets this production apart is the set. In the Old Vic’s current in-the-round configuration, you are trapped in a physical crucible with the damned. It’s incredibly intense, almost claustrophobic with the proximity of this heightened emotion.

(There were a few laughs. I positively guffawed at the line: “The pure in heart need no lawyers.” But maybe that’s just me!)

“I know not what a witch is.”
“How do you know then that you are not a witch?”

Famously, Miller’s 1953 play was written in response to Senator Joe McCarthy’s anti-communist witch trials of the time, in which Miller’s long-time friend and collaborator, director Elia Kazan, was amongst those who signed and informed on his friends. The loopy logic of those who sat in judgment, brooking no defense, is still terrifying to contemplate.

The Crucible continues at the Old Vic until 13 September 2014. 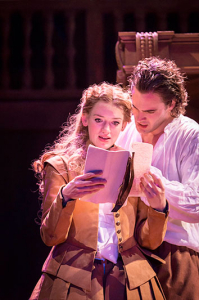 Lucy Briggs-Owen and Tom Bateman in Shakespeare in Love

On the night I attended Shakespeare in Love, my partner declared that it was much better than the 1998 film starring Joseph Fiennes and Gwyneth Paltrow while I disappointed friend considered it a pale imitation. I have seen the film and recall enjoying it, but that didn’t diminish my enjoyment of this in the least.

Shakespeare in Love is a bouncy, big-hearted show about romance and a love of theatre. As a soppy romantic and an avid theatregoer, I can’t help but embrace it warmly. Tom Bateman and Lucy Briggs-Owen are charming as blocked writer Will and his muse Viola, and they’re rather joyously supported by a company channeling historic figures of fun, including: David Oakes as Christopher Marlowe, Errol Flynn-doppelganger Doug Rao as Ned Alleyn, David Ganley as Richard Burbage, Colin Ryan as John Webster, Paul Chahidi as Philip Henslowe and a fiercely bewigged Anna Carteret as Queen Elizabeth I.

“The natural condition [in theatre] is insurmountable obstacles on the road to imminent disaster.”

“I close this theatre for public indecency.”
“Admittedly, we are under-rehearsed, but is that really a moral issue?”

There’s also a bit with a dog, of course. (Spot, credited as Barney in the programme.) 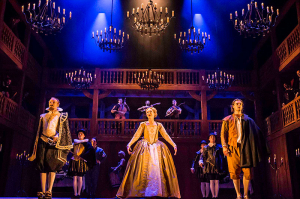 Paddy Cuneen’s original practices music, regularly interspersed with the action and belted out for choreographer Jane Gibson’s celebratory cast jig at the curtain call, and Nick Ormerod’s stunning Rose recreation made me yearn for Declan Donnellan’s production to be transplanted to the open air – more particularly, Bankside. It would be amazing to see Shakespeare in Love staged in its spiritual home, Shakespeare’s Globe.

Given that the lead producer is Sonia Friedman, who had a monster hit in the West End and on Broadway with the 2012 Globe productions of Twelfth Night and Richard III, surely that’s not beyond the realms of possibility? Go on, Sonia, have a word with Globe artistic director Dominic Dromgoole.

Shakespeare in Love is currently booking until 25 October 2014.

Other plays I’ve enjoyed recently have included Jamie Lloyd’s production of Richard III starring Martin Freeman, which I blogged about here, Benedict Andrews’ modern-dress production of Tennessee Williams’ A Streetcar Named Desire, starring Gillian Anderson at the Young Vic, and Headlong’s UK premiere production of Jennifer Haley’s The Nether, for which watch out for another blog soon…