My theatre diary: Five plays worth seeing, from Adler to Bakersfield

My theatre diary: Five plays worth seeing, from Adler to Bakersfield

Despite the considerable distractions of the World Cup, Wimbledon and my own much-talked about (!) triathlon debut in Wales – I’m a sucker for a sporting spectacle – I have been lucky enough to squeeze in some top theatregoing in recent weeks.

Here are five plays I can heartily recommend, listed in closing date order. Red Forest and Adler and Gibb both finish their brief limited seasons this Saturday 5 July – so seriously, DO NOT delay if you want to see them!

If you follow me on Twitter (@TerriPaddock) – and, for goodness’ sake, why wouldn’t you?! – you may have spotted my growing #theatreselfies gallery and reactions on the night. Scroll down for those precious tweets gathered here for posterity. 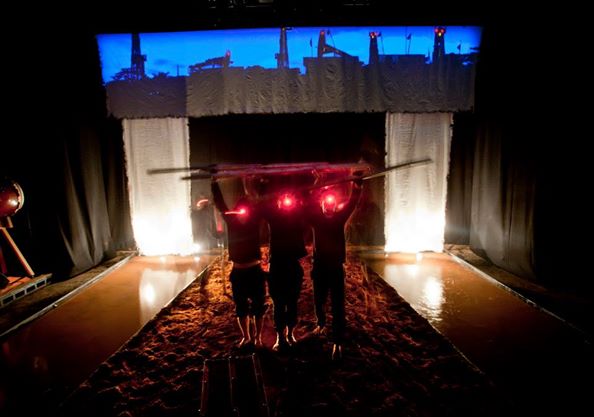 Belarus Free Theatre, who had a hit here at the Young Vic with Minsk, has collected stories from refugees around the world and present them in a visual feast of movement, music, multimedia and moving narration. You have to admire the fortitude of these Belarussian artists, making theatre under constant threat of arrest.

Like Mr Burns at the Almeida, writer-director Tim Crouch’s new play Adler and Gibb is Marmite theatre. I am on the ‘loved it’ side of the debate, but that love wasn’t instant. Over the two-hour performance, and particularly post-interval, the piece grew on me, perplexity and slight irritation yielding to absorption and awe. My final opinion was sealed by the twist in the play’s dying moments: very very clever and a hugely satisfying payoff for sitting through the pretense of the first act.

Adler and Gibb is inventive and playful, with great turns from Rachel Redford as a zealous student giving a presentation about the late conceptual artist Janet Adler of the title, and Denise Gough as a driven starlet hoping to play her in a planned film.

Adler and Gibb finishes at the Royal Court Downstairs on 5 July 2014. 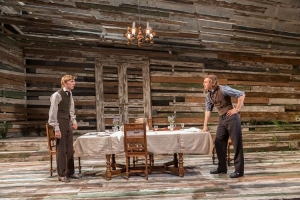 Brian Friel’s 1987 adaptation of Turgenev’s classic 1862 Russian novel Fathers and Sons receives a light feminine touch care of Chimerica director Lyndsey Turner who, title notwithstanding, makes you notice the quiet loss and dignity of the mothers in the piece as much as the men, and feel the aching torment of young love.

There’s great ensemble acting all around by a cast including Joshua James and Seth Numrich as the nihilism-spouting sons and Anthony Calf and Karl Johnson as their respective fathers, as well as Caoilfhionn Dunne, Elaine Cassidy, Lindy Whiteford and Tim McMullan.

Fathers and Sons runs at the Donmar Warehouse until 26 July 2014. 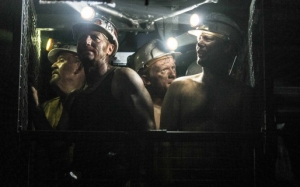 Miners in Wonderland at Hampstead Theatre

Amazing to think that this is only Beth Steel’s second play. It’s tackling a big, horny subject – the 1984 miners’ strike – and it has an appropriately epic feel. And a truthful one too. (A programme note explains that Steel is the daughter of a miner from Nottinghamshire.) Edward Hall directs the all-male ensemble, most of whom play multiple parts as miners, ministers, police and publicans, while clambering up, down and all round Ashley Martin-Davis’ astonishing Meccano set. If you possibly can, get yourself one of the onstage seats to be taken right into the heart of the action. Another bulls-eye success for Hampstead.

Kathleen Turner and Ian McDiarmid make one of greatest and most unlikely double acts in the history of the West End. Together, they elevate Stephen Sachs’ slight but enjoyable two-hander into an unmissable evening. Like Adler and Gibb, Bakersfield Mist questions the value and meaning of art – but in much more straightforward fashion

She plays Maude, whose American trailer trash demeanor belies a fierce natural intellect. He is Lionel, an upper-crust English art historian come to appraise a painting she found in a thrift store that just might – and she so desperately hopes is – a Jackson Pollock. But is he too quick to rule, on both the painting and the woman? 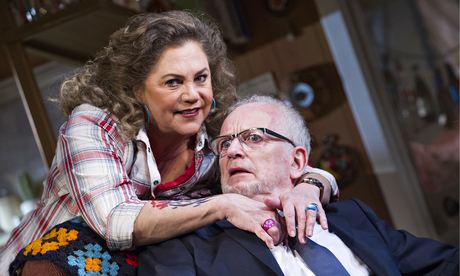 Turner is a broad, a dame, in all the best possible ways. She is Humphrey Bogart and Lauren Bacall’s love-child: booze and smoke and wisecracks and no-bullshit, no-ego attitude swill through every word she utters onstage and off. I love her. Let’s keep her cast in West End plays for the next ten years.

Sachs’ script includes some memorable put-downs (see my tweets for more) as well as some nice musings on the art and expertise. Polly Teale directs.

It’s easier to that something is fake than two prove that it is true.

Great art is the only truth.