My theatre diary: Five of my favourite plays on now

Home-My theatre diary: Five of my favourite plays on now

My theatre diary: Five of my favourite plays on now 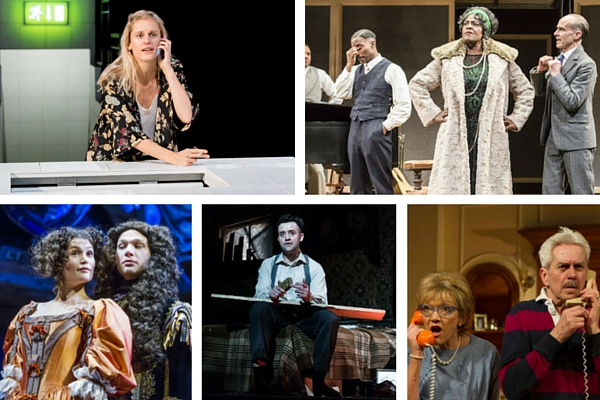 Clockwise from top left: People, Places and Things; Ma Rainey’s Black Bottom, Nell Gwynn, The Caretaker and How the Other Half Loves

From Mark Shenton’s Top Ten Tickets on My Theatre Mates last week, I noted that I could personally recommend eight of them – and, of the two I couldn’t whole-heartedly endorse, one of them, the NT revival of Lorraine Hansberry’s Les Blancs, I haven’t yet seen.

But, in this theatre diary catch-up, I want to concentrate on five top plays – four of them which also make Mark’s list and three of them led from the front by stunning female performances and also Olivier laden. 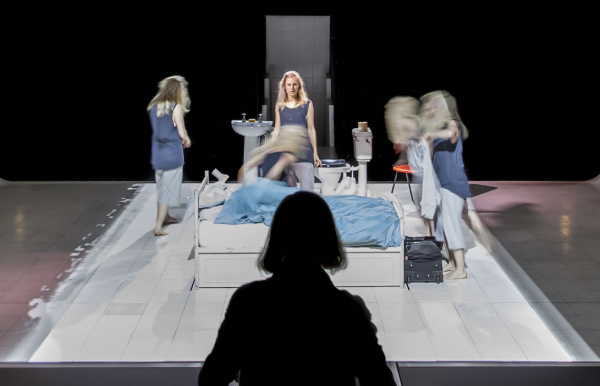 Denise Gough and multiple Emmas in People, Places and Things

I finally caught up with this Headlong premiere, first seen last year at the National and now transferred to Wyndham’s Theatre, just a few days before the Oliviers this year. I tweeted on the night that if Denise Gough didn’t win the Best Actress gong at the awards ceremony, it would be a travesty. Luckily, she did – though I would have liked to see author Duncan MacMillan also take home the prize for Best New Play, which went instead to People, Place and Things’ predecessor at Wyndham’s, Martin McDonagh’s Hangmen.

Gough is staggeringly raw as Emma (or is it Nina?), an actress whose addictions have spiralled out of control who is now struggling both to get clean and to put her faith in something in our secular 21st century. Alcohol, drugs (and playing a role) are all fixes, and the only things that “have never let me down. They have always loved me.”

With multiple Emmas and a psychedelic combination of lighting and sound, Jeremy Herrin’s production allows us to experience some of Emma’s drug-addled confusion. And after her hard-won rehab, there’s a nasty sting in the tail in the family denouement.

People, Places and Things runs at Wyndham’s Theatre until 18 June 2016. 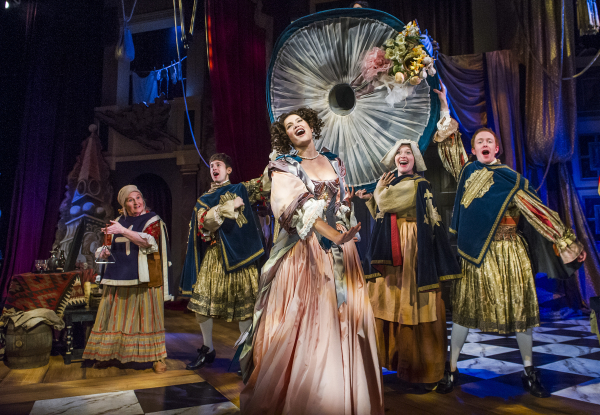 Gemma Arterton and the cast in Nell Gwynn.
©Tristram Kenton

Before witnessing Gough in People, Places and Things, I had my Olivier Best Actress hopes pinned on Gemma Arterton for this play. She was, of course, nominated and on awards night seemed to give one of the biggest cheers when Gough’s name was announced.
Coincidentally, Arterton, like Gough, was recognised for playing an actress: in her case the real-life historical figure Nell Gwynn, one of the first women to tread the boards in Restoration England, who went on to become the mistress of King Charles II. Arterton positively sparkles as the East End lass with abundant good cheer and warmth in Christopher Luscombe’s boisterous production of Jessica Swales’ Best New Comedy winner, first seen last year at Shakespeare’s Globe. There’s sterling comic support too from Michelle Dotrice’s as Nell’s dresser and Sarah Woodward in the dual roles of Charles’ Portuguese queen and Nell’s gin-soaked mum.

Nell Gwynn runs at the Apollo Theatre until 30 April 2016. 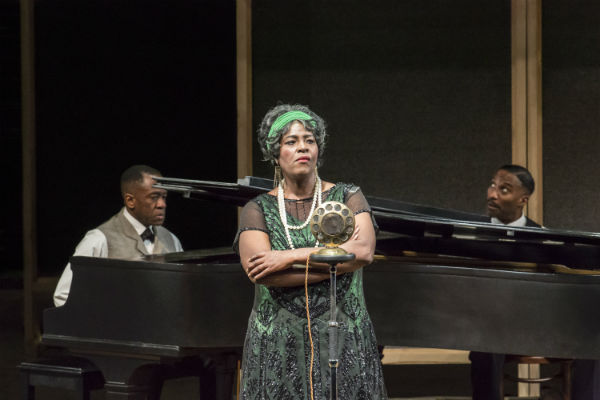 Sharon D Clarke is the title star in Dominic Cooke’s revival of Ma Rainey’s Black Bottom, and was one of the black actresses that Gough dedicated her Olivier to in her acceptance speech denouncing the lack of racial diversity in the all-white Best Actress category (it’s not just a problem for the Oscars).

Clarke is indeed a force to be reckoned with as blues singer Ma Rainey, whose botched recording session for white paymasters in Chicago provided the inspiration for the 1920s instalment of August Wilson’s epic twentieth-century chronicle of African-American life. When she belts out the title number, the hairs on the back of my neck responded.

But, in reality, Ma Rainey’s Black Bottom – which rightly scooped the Olivier for Best Revival – is an ensemble piece, and particularly focuses on the relationship between the four black men in Ma Rainey’s band. Lucian Msamati is the wise elder (I can’t wait to see his Salieri in Amadeus later this year), with his younger co-horts – played by Clint Dyer, Giles Terera and O-T Fagbenle – all coping in different, and finally devastating, ways with their feelings of powerlessness in the white man’s world.

Ma Rainey’s Black Bottom runs at the National’s Lyttelton Theatre until 18 May 2016. 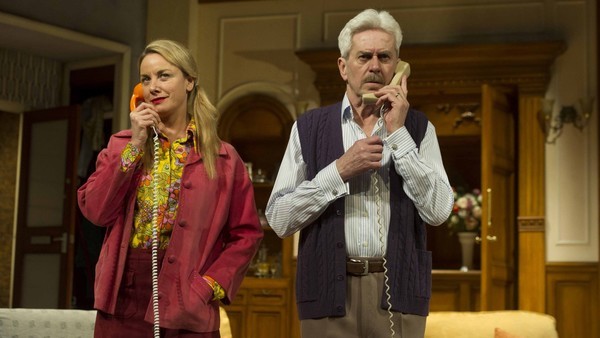 How the Other Half Loves

I’ve written elsewhere about this revival of Alan Ayckbourn’s 1969 farce, having had the pleasure of chairing a post-show Q&A with director Alan Strachan and the cast during previews (click here for photos and podcast). But I didn’t want to miss the opportunity to give the production itself another plug – it’s sheer enjoyment from start to finish performed by a well-oiled ensemble who seem to be having the time of their lives. At the centre of much confusion between three married couples, Nicholas Le Prevost as the ultimate Tim-Nice-But-Dim is priceless. He’s joined by Jenny Seagrove, Jason Merrells, Tamzin Outhwaite, Gillian Wright and Matthew Cottle.

How the Other Half Loves at the Theatre Royal Haymarket until 25 June 2016. 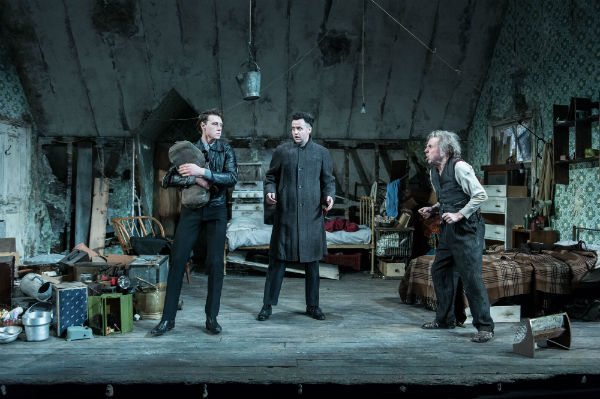 I’m not the biggest Harold Pinter fan; in fact, more often than not, I simply don’t enjoy his plays, especially the notoriously darker, male-oriented ones. So much so that I’ve elected to give many recent revivals a miss, including Jamie Lloyd’s much-acclaimed revival of The Homecoming earlier this year.

But I am a big fan of the actor Daniel Mays and he was my primary lure for Matthew Warchus’ production of The Caretaker. I’m glad I made an exception, not just because Mays was as good as I expected but because he was more than matched by George Mackay and Timothy Spall (surely he must do more theatre after this?) in this three-hander. Mays and Mackay are brothers Aston and Mick – and you’re never entirely sure which is the more volatile threat – who take into their dilapidated home Spall’s Davies, a tramp who stinks “from arsehole to breakfast tray”.

I’ve read various critics note that Warchus’ production misses the menace of the piece, but, performances aside, that’s one of the things I enjoyed most about it. I’ll take Harold’s humour and wry characterisations above the trademark violence, thank you. It may be Pinter Lite, but that works for me.

The Caretaker runs at the Old Vic Theatre until 14 May 2016.