My theatre diary: Comedies The Ruling Class, Di and Viv and Rose, Diary of a Nobody and Bad Jews

Home-My theatre diary: Comedies The Ruling Class, Di and Viv and Rose, Diary of a Nobody and Bad Jews

My theatre diary: Comedies The Ruling Class, Di and Viv and Rose, Diary of a Nobody and Bad Jews 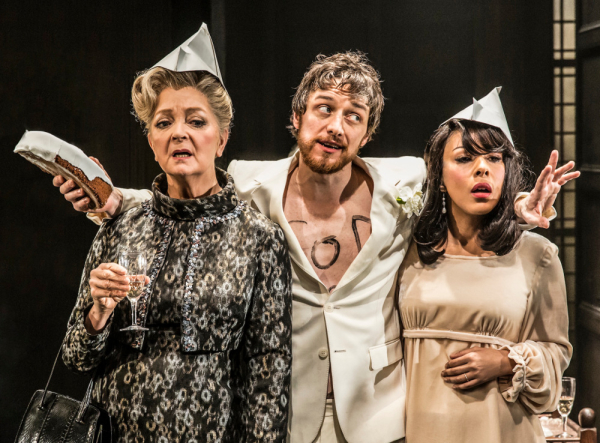 I’ve had a heavy schedule of plays over the past few weeks, including quite a few comedies, many of them with deep, dark cores. (For dramas I’ve seen recently, see my companion Theatre Diary piece.)

As usual, I’ve listed productions in closing date order. Note, the first – not the least bit dark – finishes in the next fortnight, so don’t delay! 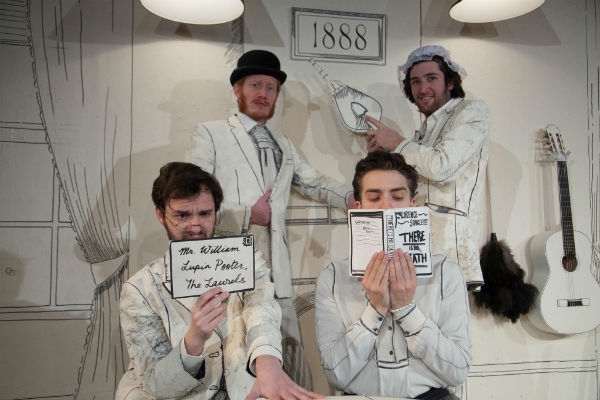 The Diary of a Nobody

First serialised in Punch magazine in 1888,The Diary of a Nobody is a quintessentially English comic novel, written by brothers George and Weedon Grossmith, about bank clerk Charles Pooter, his wife Carrie, their son Lupin and their various friends and acquaintances in genteel, Victorian novel. Rough Haired Pointer’s all-male staging, adapted and directed by Mary Franklin, returns for a second season at the King’s Head, where it launches the theatre’s new play-focused era after the departure of the previously resident OperaUpClose company.

Jake Curran is Pooter, the ‘Nobody’ of the title and Jordan Mallory-Skinner is his ‘pretty little wife’; clowns George Fouracres and Geordie Wright play most of the other 45 parts, including wayward only son Lupin, his inappropriate fiancee and the grumbling housekeeper. Designers Carin Nakanishi and Christopher Hone make the Punch-style pen-and-ink drawings come to life in a cleverly low-budget set. This is a page-to-stager acutely aware of its source material and not afraid of affectionately sending it, and a bygone English society, up. A must-see for fans of The 39 Steps.

The Diary of a Nobody continues at the King’s Head Theatre until 14 February 2015. 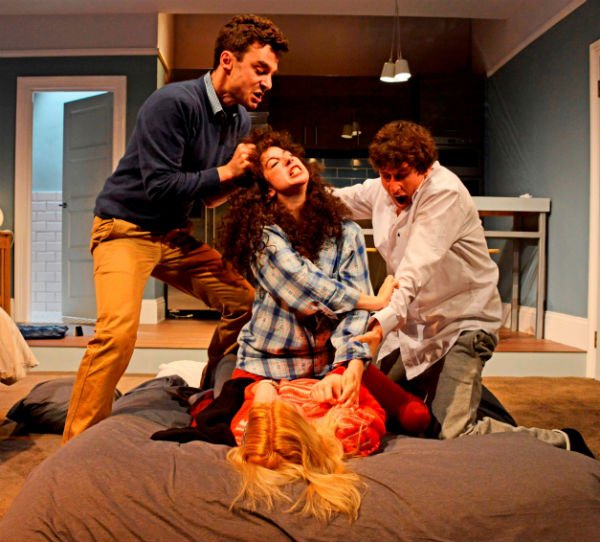 This UK premiere production of American Joshua Harmon‘s hilarious four-hander comes to London’s St James via the Theatre Royal Bath, already brandishing a UK Theatre Award for Jenna Augen for her fiercely intelligent, religiously zealous, motor-mouthed protagonist (or, more accurately, antagonist), Daphna. If there are any London awards bodies that still bestow prizes for comedies, I’d say this is a shortlist shoo-in. In fact, let me go ahead and award it the Terri Paddock prize for Best New Comedy of 2015 – though we’re only one month into the new year, I just can’t imagine anything besting it in the next 11 months.

It’s Jewish family fireworks in a New York studio flat. After the funeral of their concentration camp-survivor grandfather, ‘superJew’ and Israeli-aspirant Daphna and her cousins, brothers Jonah (Joe Coen) and Liam (Ilan – son of Henry – Goodman), and Liam’s ‘tepid little Bambi’ blonde girlfriend Melody (Gina Bramhill), gather to mourn, squabble and eventually come to blows over granddad’s inheritance, specifically a religious heirloom to which both Daphna and Liam consider themselves most entitled.

“Over my dead body is she going to wear my grandpa’s Hebrew Chai around her Christian cunt neck.”

In between the uproarious laughter and breakneck rants (Liam’s riposte to Daphna is priceless) in Michael Longhurst‘s high-octane production, there are profound observations made and questions asked about faith, family, religion, tradition and, above all, identity. What is the price of our secular, inter-racial, inter-faith modern society? Highly recommended.

Bad Jews runs at the St James Theatre until 28 February 2015. 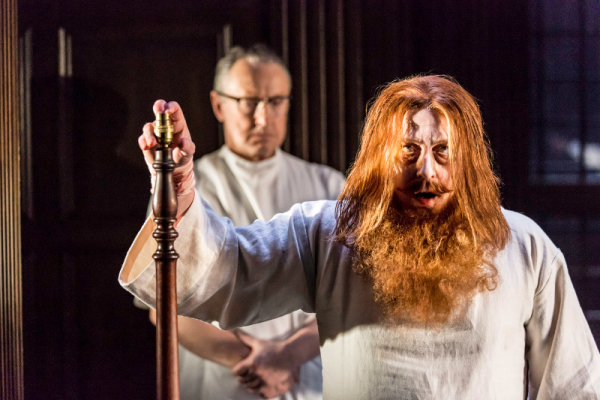 James McAvoy isn’t the only would-be Messiah in The Ruling Class: Forbes Masson has a go

Taking zealotry – and inheritance shenanigans – to a different level altogether, James McAvoy plays another motor-mouthed, religious zealot in Jamie Lloyd‘s first London revival of Peter Barnes‘ 1968 stage play (made into a film starring Peter O’Toole in 1972). He is the soon-to-be 14th Earl of Gurney, released from an asylum to assume his title after his father auto-asphyxiates himself while wearing a tutu during his nightly sex act. (That’s the first five minutes of the play!)

Trouble is, after the horrors he endured in a “primitive community of licensed bullies and pederasts” (i.e. public school, where he was shipped away to, aged 11), Jack is now a paranoid schizophrenic who believes he’s god. His wily uncle (Ron Cook) tries to manipulate Jack out of his title and fortune by having him committed, while other family attempts to control him involve training him to appear sane, whatever ‘sanity’ means to the upper classes. (“The acid test still is: would he pass muster in the House of Lords?”)

Appearances aside, though, with a cure that’s much worse than the original disease, Jack learns to manipulate better than the best of them. As the play descends into a pitch-black second act, the god of love becomes the god of revenge and Jack the Lord transforms himself into Jack the Ripper, with sickening glee. (It wouldn’t be a Jamie Lloyd production without lots of blood, would it?!)

“Behaviour which would be considered insanity in a tradesman is looked upon as mild eccentricity in a lord.” 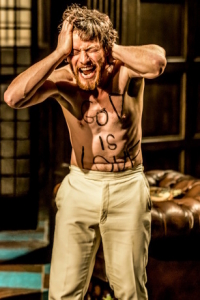 James McAvoy gives an extraordinary performance in The Ruling Class

The Ruling Class is a mad play about madness (as well as class, privilege and wealth inequality), and not one I can recommend strictly for the work itself. However, for McAvoy’s central performance, I have no superlatives great enough. In an evening in which he’s called upon to lose his mind again and again, as well as sing, tap dance, high vault, ride a unicycle and speak in tongues, to say that McAvoy invests Jack with a manic and combustible energy seriously understates the point.

Forbes Masson as a rival Messiah (as well as other cross-dressing roles) exerts similar force, while elsewhere in the cast, Joshua McGuire, Serena Evans, Kathryn Drysdale, Anthony O’Donnell and Elliot Levey do well to hang on during a white-knuckle ride. 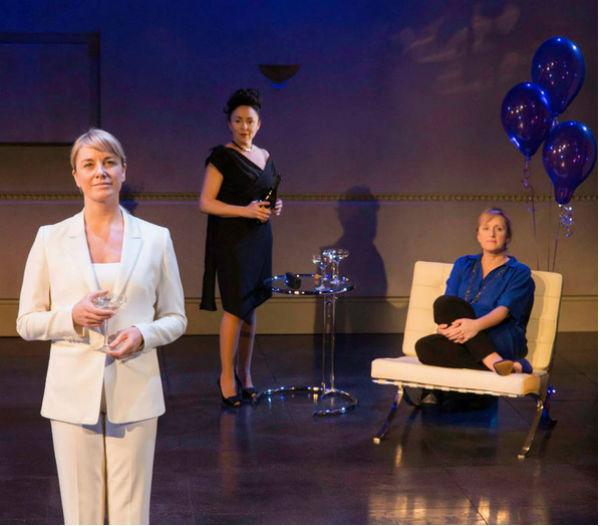 Tamzin Outhwaite, Samantha Spiro and Jenna Russell in Di and Viv and Rose at the West End’s Vaudeville Theatre

Di and Viv and Rose

Di, Viv and Rose meet at university and share a ramshackle flat, where most of the first act is set. For anyone of a vaguely similar age, the portrayal of 1980s student haze days, including jumping around on cheap furniture pretending you’re in an MTV video (in this case to Aerosmith’s “Walk This Way”), is deeply nostalgic.

“We have joint custody of a chunk of the past.”

In the play’s more episodic second half, we embark on a bumpier whistle-stop tour through the women’s adulthoods in which these three endure more than their fair share of heartache and tragedy. But even when it flies close in the face of melodrama, Di and Viv and Rose succeeds in awakening tenderness for your own personal past. You mustn’t forget, or ever undervalue, the people you knew way back when, the people who can appreciate who you were then, who you are now and how far you’ve come in between.

Di and Viv and Rose is booking at the Vaudeville Theatre until 23 May 2015.