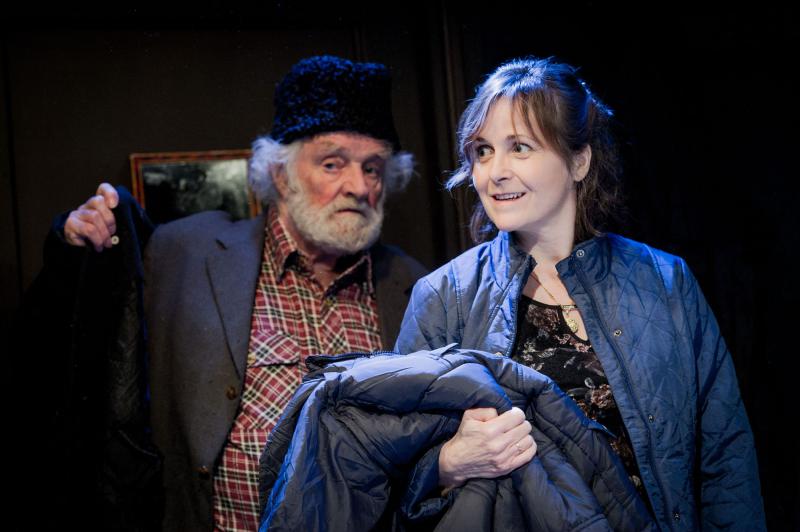 If these first few weeks are anything to go by, 2015 is going to be an entertaining year. Here are four, very different plays that I’ve seen recently and am happy to recommend.

After a sell-out at the fringe Old Red Lion Theatre, Donkey Heart (a reference to the foolish stubbornness of love) has transferred to Trafalgar Studios’ intimate 100-seater for a limited season.

This is a real family affair onstage and off. The action is set in a cramped, modern-day Moscow apartment, where three generations live cheek by jowl and extra space is always found for houseguests (an English exchange student, a dislodged secretary), no matter the amount of inconvenience or indiscretion.

A Russian lady sat behind me said the portrayal of the Russian family dynamics was spot-on – particularly, amongst the older characters, the shadow cast by the Soviet Union’s legacy. The KGB may no longer represent a daily threat to one’s safety, but there is still a latent fear of spying and a mourning of losses.

“The best thing to follow a vodka?”
“Another vodka.”

Donkey Heart is written by Moses Raine (whose previous plays include Shrieks of Laughter and the Verity Bargate-shortlisted The Survival Handbook), directed by his sister (and fellow playwright) Nina and dedicated to their mother, from whom the siblings owe their Russian heritage.

The superb cast includes Patrick Godfrey as the haunted but stoic grandfather, Paul Wyett as a dictatorial father and Amanda Root as his cuckolded wife, Lisa Diveney as daughter Sasha and Alex Large as her besotted English suitor.

James Musgrave and Georgia Henshaw provide comic relief as a young warring couple, and Emily Bruni does double duty as the PA in the middle as well as, in a free addition to the bill, a new 20-minute monologue Before You Were Born, performed immediately after the show. 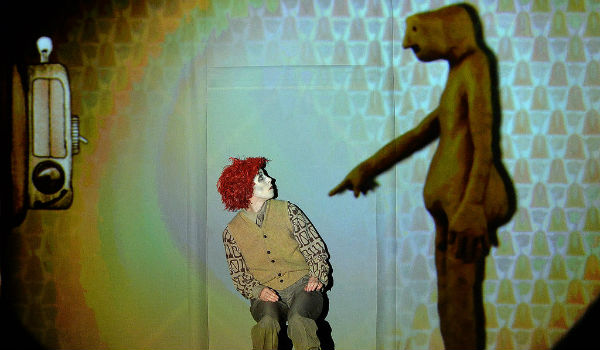 Having cut its teeth on the cabaret scene, theatre company 1927 announced its arrival with 2010’s The Animals and Children took to the Streets, which had three seasons at the National and toured internationally for years.

This new offering – co-produced with Salzburg Festival, Paris’ Theatre de Ville and the Young Vic, and long in development – is sure to swell its global following further. Tickets for this limited London premiere season are already like gold dust. (You are advised to call on the day of performance for returns availability.)

“You’re being controlled by your Golem.”
“No, Golem just knows what I want before I do.”

In Golem, the company, founded by director Suzanne Andrade and designer Paul Barritt, create a dystopian near-future where technology simultaneously distracts, destroys and directs our every move. (Sound familiar?) This is achieved, and the irony certainly hasn’t escaped 1927’s notice, by using an awful lot of technology – animated film and video projections render the world and its surroundings, which the actors inhabit with jerky video-game-like movements, swapping in and out as they also share live music duties at the side of the stage.

“Move with the times or you’ll get left behind.”

With the monotone pitch of the narration, the lilting music and the flickering of the projections, Golem washes over you to mesmerising effect. After the curtain call, my partner and I waited for a few minutes to collect our belongings and thoughts, before stumbling out of the auditorium, feeling dazed and slightly drugged.

For “Golem”, read smartphone, and the realisation hits hard that the future which 1927 envisions is not only closer than we might like to imagine, it’s now. Tech liberation enslaves us all. If you loved 1984 or Privacy last year, this is your first must-see of 2015.

Golem runs at the Young Vic Theatre until 31 January 2015. 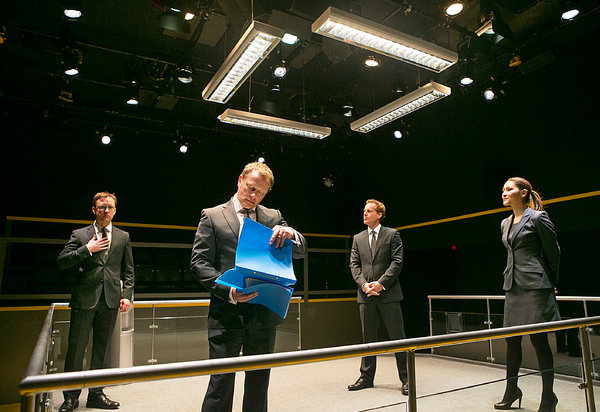 Another hot ticket at the Young Vic, Bull, the latest Mike (King Charles III) Bartlett premiere, added an extra week to its London season before it even opened. A companion piece to Bartlett’s 2009 three-hander Cock, Bull, directed by Clare Lizzimore, was first seen at Sheffield Crucible followed by a season at New York’s 59E59 in 2013.

“What did I do? There must’ve been a day, ages ago, when I did something to you two. That pissed you off.”

For me, this play about savage office politics, in which three colleagues – mercilessly cutthroat Eleanor Matsuura and Adam James and ever-doubting Thomas – vie for two jobs, was an exceedingly difficult watch.

In the Maria, the audience is arranged around four sides of designer Soutra Gilmour’s boxing/bull ring stage; on the first ‘standing room’ level, they are literally propping themselves up “on the ropes” with the actors, who are joined by Neil Stuke as the boss who encourages the climate of fear and loathing.

“You can [appeal]. But if you win, and stay, I’ll make your life a nightmare because I don’t like to be told what I can and can’t do. And if you lose, it goes on your record, it affects your reference. So yes. You can. Appeal. If you want. Or you can just go, quietly.”

Despite this proximity and the brilliance of Bartlett’s script, though, the truth is I have seen worse bullying – at closer at hand and more brutal – in real-life. Which is what made my viewing so personally difficult. At several points, I couldn’t watch and was overcome with tears of rage. Some exchanges were so nearly verbatim, I thought Bartlett must have installed covert listening devices in offices across London.

Several critics have referred to Bull as a black comedy; to my mind, bullying is no laughing matter, and I found the mirthful reactions of those around me nearly as difficult to take in as the play itself. (Perhaps that’s the subject of a separate blog!)

If you’ve been recently victimised yourself, you should probably avoid Bull, as it may leave you in a quivering mess, like the gored Thomas, by the final scene. For those with thicker skins or happier workplace memories though, it’s compelling viewing, very much like a bullfight, with suits instead of capes.

Bull has extended at the Young Vic, running in The Maria studio, until 14 February 2015. 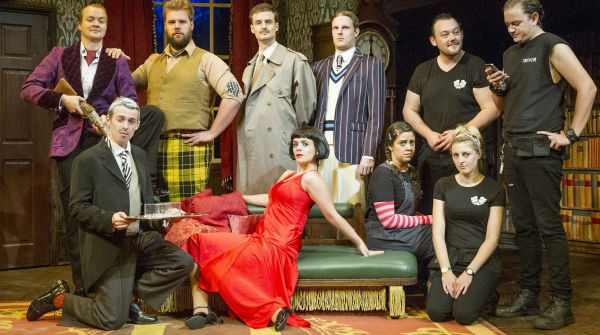 The Play That Goes Wrong

If your mood is laid low by Bull or Golem, or anything else life has to throw at you, The Play That Goes Wrong is the perfect comic antidote. I was delighted to finally catch up with this “little play that could”, which looks likely to keep them rolling in the aisles at the Duchess for some time to come.

The Play That Goes Wrong is the brainchild of Mischief Theatre, founded in 2008 by out-of-work LAMDA actors and led by Henry Lewis and Jonathan Sayer, who had success on the comedy improv circuit before teaming up with West End producer Kenny Wax.

As the title suggests, this is an evening in which an awful lot of things go wrong – to exactly the right type of fast-paced, farcical effect. Indeed, what this troupe goes through in its play-within-a-play “Cornley Polytechnic Drama Society” staging of “Murder at Haversham Manor” makes Michael Frayn’s Noises Off look tame.

Previous Cornley Polytechnic Drama Society productions (with a few tweaks to the scripts due to casting and production limitations) include:
• James and the Peach
• Ugly and the Beast
• Snow White and the Tall Broad Man
• Two Sisters

Do be sure to buy the “programme-within-a-programme” too for chuckles even after you’ve left the theatre. If the actors ever decide to leave theatre, they may have a bright future in ad copywriting (Conley Sunam Balti House: There’s Naan finer).

The Play That Goes Wrong is currently booking at the West End’s Duchess Theatre until 5 September 2015.