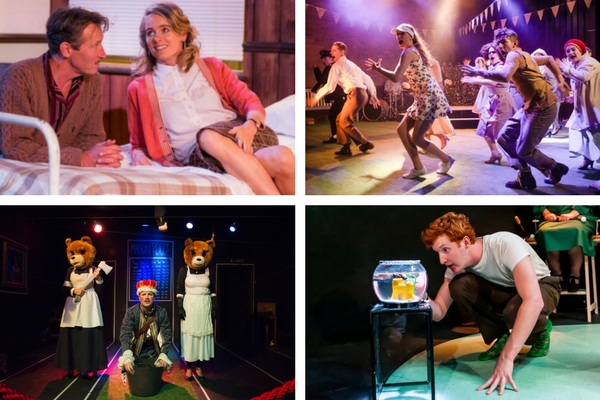 It’s not just umbrella festival programmes, as I blogged earlier, that keep myself and other London theatregoers busy in August. Here’s a round-up of some of the other plays and musicals I’ve seen recently that are worth a look. Get booking if any tickle your fancy – all are limited seasons finishing in the next week or two. Scroll down as well for my on-the-day tweet reactions to each.

After the election of Donald Trump – and especially since his spokesperson Kellyanne Conway‘s declaration of “alternative facts” after his disputing inaugural crowd sizes in January  – sales of George Orwell’s 1984 have surged by a staggering 9,500% and the Almeida Theatre’s stage adaptation has become a hit on Broadway (where audiences have reportedly been fainting and vomiting in reaction – steady on!). 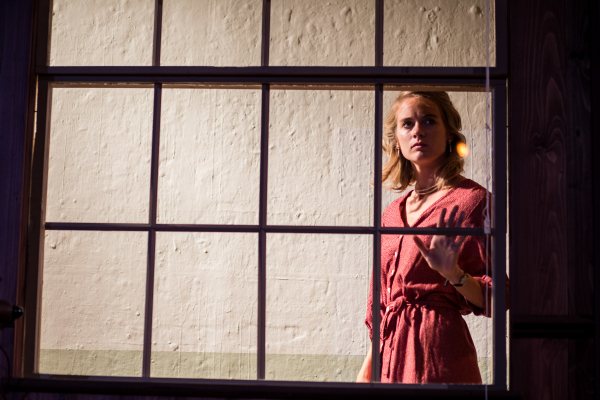 So, ideal timing for a closer look at the man behind the seminal dystopian novel, which is what Tony Cox‘s new play, presented at the Old Red Lion care of Proud Haddock, offers. Indeed, as the title suggests, Mrs Orwell looks not just at George Orwell, but at his relationship with his muse, publisher’s assistant turned second wife, Sonia Brownell, who was believed to be the model for heroine Julia in 1984.

Mrs Orwell focuses on Orwell’s final days, when he is hospitalised, dying from tuberculosis, and Sonia agrees to marry him, hoping that happiness will make him well enough to be able to write at least one more novel. Sadly, the marital medicine didn’t work – it’s sobering still to imagine what literary masterpieces we have all missed out on because of Orwell’s premature death in 1950 at the age of just 46. His major novels, 1984 and Animal Farm were both only published in the last five years of his life. 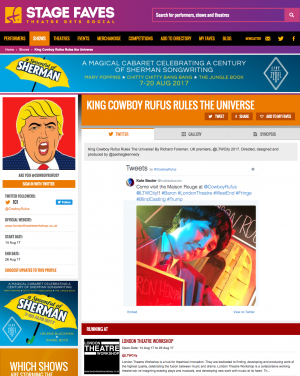 Get all social media for Cowboy Rufus & its cast on www.stagefaves.com

Orwell links aside, and RSC and NT veteran Peter Hamilton Dyer is a superbly acerbic George, this Proud Haddock premiere, directed by Jimmy Walters, has attracted lots of press attention for the casting of Cressida Bonas, a.k.a. Prince Harry’s ex-girlfriend, in the title role. Bonas is very pretty, and period perfect for the part, and I was struck by how much she reminded me of a young Sienna Miller. I hope she’ll do more theatre work in future.

There’s a more straightforward Trump link with King Cowboy Rufus Rules the Universe. American theatremaker Richard Foreman originally wrote the political satire with music in 2004 about George W Bush, back when liberals thought Bush was the worse right-wing president imaginable. Now, with a real baby in the Oval Office, and with an orange-faced clown playing the ‘King’ (Stewart Briggs) here, the piece takes an added resonance.

I imagine, too, that Foreman and the company for this UK premiere would be delighted if any audience members, a la 1984 in New York, fainted or vomited – as the director Patrick Kennedy has written, one of the points of the production is to nauseate. And, through disorienting disgust, to get people to ‘wake up, wake up, wake up’. 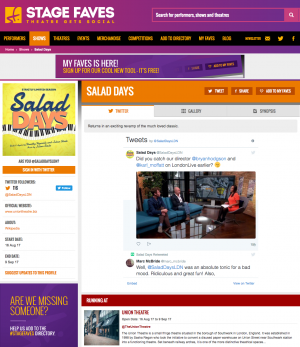 Get all social media for Salad Days & its cast on www.stagefaves.com

In another UK premiere of an American play, Peter Sinn Nachtrieb‘s Boom care of Announcement Productions at Theatre503, post-apocalyptic isn’t just a feeling. The three-hander is set sometime in the far-distant future but looking back at the point of oblivion – care of a comet rather than Donald Trump – to determine how regeneration was made possible. There’s a clever twist at the end that proves Nachtrieb’s point: whatever humanity’s failings, “biology is optimism”.

Back to the 1950s, and specifically 1954, when optimism was in more abundant supply, for Bryan Hodgson‘s new production of Salad Days. In Julian Slade and Dorothy Reynolds‘ quirky British musical, there’s a determined effort to reject nostalgic pining for the ‘good old days’ (“We Said We Wouldn’t Look Back”) and instead embrace the future.

Famously, it was Salad Days, which transferred from Bristol to the West End’s Vaudeville Theatre, running for 2283 performances, that inspired Cameron Mackintosh to become a theatre producer. For that alone, it’s a must-see for musical nerds – but throw in the chance to see a show that includes a mime, a flying saucer, Cleopatra and a magical piano, plus a large, energetic cast dancing their feet off (choreography by Joanne McShane) in the intimate Union, and it becomes irresistible.

Salad Days runs at the Union Theatre until 9 September 2017.