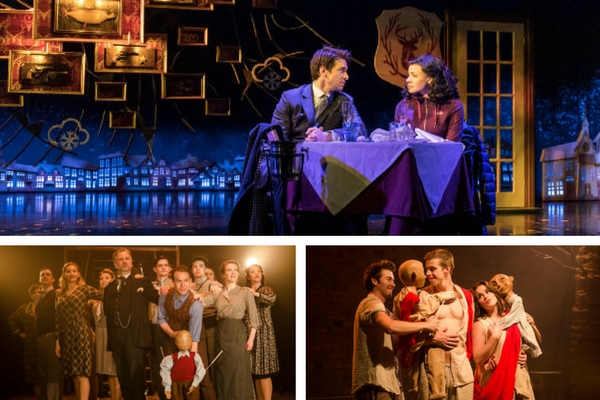 Clockwise from top: Groundhog Day, Children of Eden and Allegro.

This instalment of my theatregoing recommendations could be called not just my musicals diary but my musicals-on-my-doorstep diary. All three shows – Children of Eden, Allegro and Groundhog Day – are playing at what I consider neighbourhood theatres, within five to ten minutes’ walk of my front door: Southwark Playhouse (more like two minutes), the Union Theatre and the Old Vic.

However, given my tardiness in publishing this round-up, a more pressing feature that all three share is that they’re closing very soon. So let’s call it the musicals-on-my-doorstep-that-should-be-seen-immediately diary.

Given my knowledge of said neighbourhood, I’ll go one further in helping you plan your diary. Make a day of it this Saturday, the last day for both Allegro and Children of Eden… See the 2.30pm matinee of Children of Eden at the Union Theatre. Then spend the couple of hours’ interim at Mercato Metropolitano, the newly opened and already buzzing Italian market of warehouse and open-air stalls on Newington Causeway (charcuterie, rose, pizza and gelato if you’re taking menu recommendations as well). That places you immediately across the street from Southwark Playhouse, for the evening performance of Allegro at 7.30pm. You may even want to leave the gelato for afterwards – the market is open until 11pm so you can easily pop back after the show.

You have another week to try to catch Groundhog Day at the Old Vic but, frankly, much less chance of succeeding. This is a monster Matilda follow-up hit for the dream team of Tim Minchin (composer and lyricist) and Matthew Warchus (director). And, as if that pedigree weren’t enough, it’s had astounding reviews. So it’s sold out. If you happen to have a day free midweek to queue for returns – maybe Monday 12 September when an extra matinee has been added – you might get lucky. If you try and fail, console yourself with a trip to Mercato Metropolitano, the like of which you’d never find in Punxsatawney.

If you follow me on Twitter (@TerriPaddock) – please do! – you’ll get my occasional #theatreselfie and initial reactions from my every trip to the theatre. Scroll down for tweets for these particular shows collated below. Here are a few more thoughts too.

For all these musicals and casts, you can get all social media feeds for them on my musical theatre site www.stagefaves.com. Please check them out! 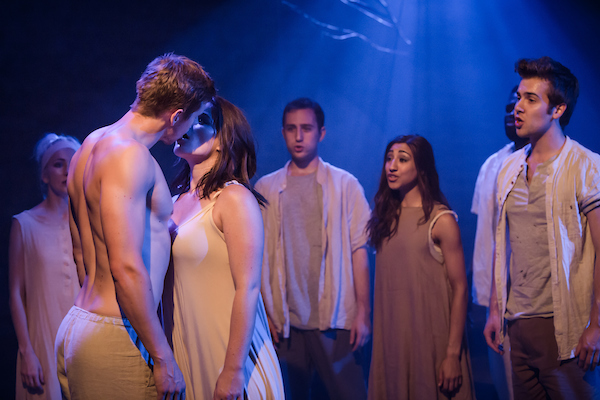 We only need another go at Joseph and the Amazing Technicolour (Lloyd Webber and Rice again, Old Testament – come on guys, a little consistency) and we could have had a Biblical musical complete set. Though, to be fair, Joseph is still (read, pretty much always) touring, care of Bill Kenwright.

“Why is the fruit glistening?”

In Christian Durham’s production of Children of Eden, look out for the human-link serpent action choreographed by Lucie Pankhurst, Kingsley Hall’s fantastic animal creations (it’s Lion King-style inventiveness on a fringe budget) in the garden and on the ark, and strong ensemble work. Special mention too to Stephen Barry and Natasha O’Brien as first Adam and Eve and later Noah and his wife.

Children of Eden continues at the Union Theatre until this Saturday 10 September 2016. 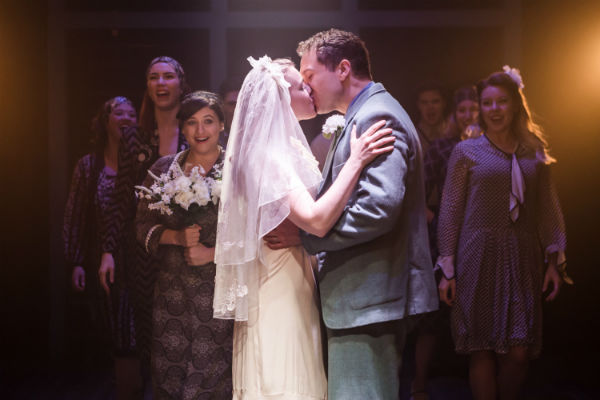 If you call yourself a musical theatre nut, you simply have to see Allegro for historical curiosity reason if nothing else. This is the Rodgers and Hammerstein 1947 Broadway ‘flop’ (that is, by comparison with the pair’s two blockbusters, Oklahoma! and Carousel, which preceded it) that never got its European premiere…until now. (Bonus theatrical lore: the original also had a young Stephen Sondheim working on it as Hammerstein’s runner.)

So, you may never see Allegro done again, and you almost certainly will never see it done so well again. This is another high-quality, chamber-style reinvention care of director Thom Southerland and producer Danielle Tarento (staging this here while also helming a season of musicals at Charing Cross Theatre).

Allegro tells the story of small town doctor Joseph Taylor Jr, who marries the wrong girl and gets his priorities all mixed up when he moves to the big city. Our protagonist (played by Gary Tushaw) may be just your ‘average Joe’, but his pretty average life story is granted epic proportions care of a Greek chorus and a sumptuous Richard Rodgers score.

If you heeded my advice and saw the matinee at the Union, watch out too for a child puppet who looks like he may be moonlighting…

Allegro continues at Southwark Playhouse until this Saturday 10 September 2016. 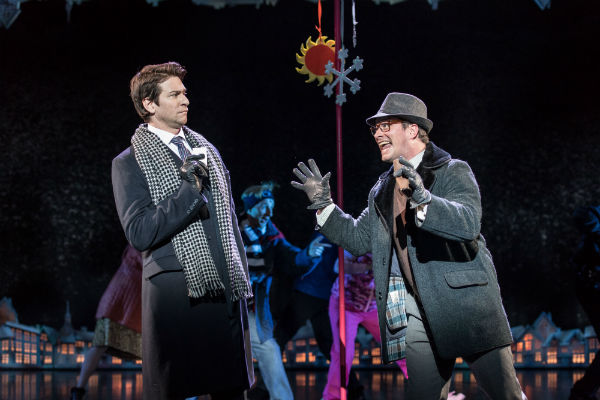 I’ll lay my cards on the table: I reckon Groundhog Day is better than Matilda. At least for grown-up audiences anyway. It speaks directly to the compromises we make as adults, the disappointments we swallow and our little (and sometimes not so little) acts of self-delusion.

“Every day is today, even tomorrow.”

Tim Minchin’s songs are as-ever jaunty and his lyrics, to borrow a Matilda phrase, more than a little bit naughty (“pointless erection” does not refer to unused builders’ scaffolding – unless we’re trading in euphemism), and Matthew Warchus’ production is awash with colour and big-hearted warmth. Somehow the team – which includes original screenwriter Danny Rubin – manages to make a story on perpetual repeat seem endlessly fresh, with dashes of magic care of designer Rob Howell and illusionist Paul Kieve.

“Do you ever have déjà vu?”
“I don’t think so but I’ll check with the kitchen.”

As for the casting, I’ll take Broadway import Andy Karl’s Phil Connors over Bill Murray’s weary weatherman in the 1993 film any day, every day. He’s handsome, funny with sarcastic charisma to spare.

But it’s the supporting roles that really tug at the heartstrings in Groundhog Day, small town stories (a la Allegro) that are specific but universal: Georgina Hagen’s local good-time girl, Andrew Langtree’s grieving widower, Jack Shalloo’s work-shy barfly. You’ll end up loving them all. Repeat after me: there’s a little big of Punxsatawney in all of us.

Groundhog Day runs at the Old Vic Theatre until 17 September 2016.