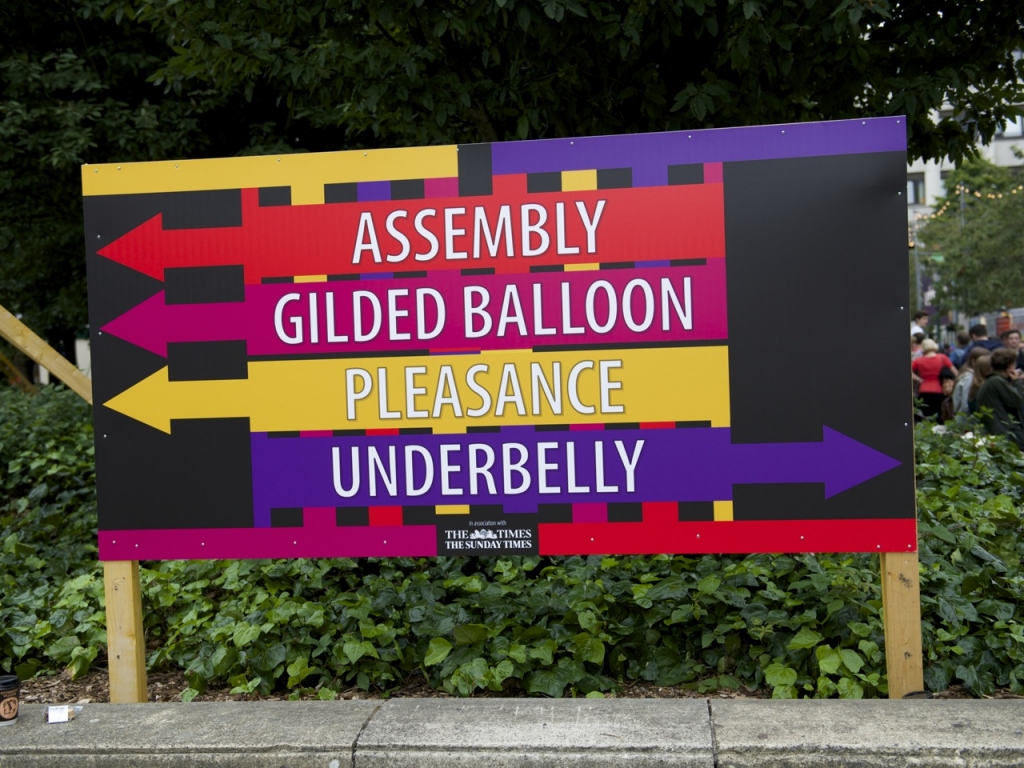 I visited all four venues at this year’s Edinburgh Fringe

This year, I’m returning from Edinburgh just at the time I would normally be heading up… And that’s not the only difference in my festival going. 2014 has been a year of many Fringe firsts for me:

1. The first time I’ve reported on the Fringe from the shows’ rather than the media perspective.

I’ve lost count of how many times I’ve attended the Fringe with my old WhatsOnStage hat on, or how many shows I reviewed and/or otherwise judged (for various awards) while wearing that hat. Since leaving WhatsOnStage last December, I’ve enjoyed being able to collaborate with shows and producers in a much more hands-on way. This year’s Fringe provided my biggest opportunity to do just that: working with producer James Seabright and the Festival Highlights team, I’ve been interviewing the theatremakers and creating content for their nine 2014 Fringe offerings.

On the ground in Edinburgh this past week, that meant not just seeing the shows and tweeting and blogging my reactions to them, but going behind the scenes to get a whole new perspective on just how much sweat and passion goes into the programme at the world’s largest arts festival.

3. The first time I’ve been up before the festival officially began.

Reviewers tend to show up just in time for the Traverse press day or about now. Or, frequently in my former guise, I’d arrive about ten days into the festival, after my chief critic had been to the Traverse and reviewed all the pre-hyped shows and I, along with other contributors, would run around mopping up and chasing the later, unexpected buzz-generators. With Festival Highlights, I travelled up last Tuesday, three days before the Fringe officially opened.

For those planning future Fringe excursions, I highly recommend visiting in this Week Zero. Many shows start performances on 30 or 31 July, and even the biggest names have rarely sold out at this early point, so you can be sure of getting tickets. In fact, if you’re on a budget and willing to take a punt, you could easily fill your first five days with nothing but free tickets as street flyerers dole out these “papers” in an effort to generate early word of mouth on their shows.

It’s also fun to see the festival landscape taking shape around you, as ticket kiosks, billboards and food huts are erected at all hours in preparation for the first weekend’s influx. Also, at this stage, anything is possible and you can feel it – around the city, the atmosphere (even when it’s raining) crackles with the hope and anticipation of the tens of thousands of artists hoping to break through at the Fringe.

(For the record, I reckon the worst time to go is Week Three. By then, everyone is exhausted and ready to go home, the majority of reviews have been published, star ratings and awards doled out, all the big hits are sold out and the “losers” know that they’re out of time to turn things around. The Monday of that week is commonly referred to as “Suicide Monday” for good reason.)

As I’ve previously blogged, when reviewing, I would average six to eight shows a day. The point was to squeeze in as many as physically possible – and then scramble in the wee hours to write something coherent about them. This year, I saw “just” the nine Festival Highlights shows, and around work commitments, managed only to squeeze in another two-and-a-half. Without wishing to sound like Tom Cruise in Jerry Maguire, I reckon this is the better way to do it – fewer shows, more attention.

5. The first time I’ve featured in the Pleasance press launch.

This will teach me to sit in the first three rows at Pleasance Grand. I got pulled onstage by The Voca People in their opening number at the packed Pleasance press launch on Saturday. No, they weren’t inspecting my hair for lice – but checking my musical brain waves. Apparently, I have a rather lovely acapella symphony going on up there.

Fewer shows don’t necessarily mean more sleep or less distraction. I was so engrossed in a conversation with journalist Veronica Lee while darting back to Festival Highlights HQ from the Pleasance Courtyard that I turned into the road without checking both directions – and was promptly hit by a taxi. The taxi brushed my side and ran over my foot, but he was taking a corner slowly and the only thing seriously wounded was my pride. (Veronica barely batted an eye – she was late for a show – though she did express concern when we met up over late-night drinks at the Udderbelly’s Abattoir bar!)

7. The first time I’ve been joined at the Fringe by my other half, boyfriend/keen amateur photographer Peter Jones.

In the years we’ve been together, I’ve discouraged Peter from joining me in Edinburgh. Frankly, as a theatrical ‘civilian’, I just didn’t think he could hack the pace, and I was sure that my round-the-clock working would lead to squabbles (as it often does back in London). But he had a business meeting in Glasgow while I was in Edinburgh and wouldn’t be put off this year.

In fact, Peter turned out to be a great asset, as I enlisted his photography skills. The better shots in the Festival Highlights gallery below are all his. While I was writing, he wandered off on his own snap-happy adventure, and even got accredited along with the press photographers at the Pleasance press launch. So check out his separate galleries of that event and other general Fringe pictures.

Peter also somehow managed to get me to sit down for two normal-paced meals… in a restaurant. Another Fringe first?

I’ve written 25 features, interviews and blogs for the 2014 Festival Highlights programme, which are being published throughout the Fringe at www.festivalhighlights.com.