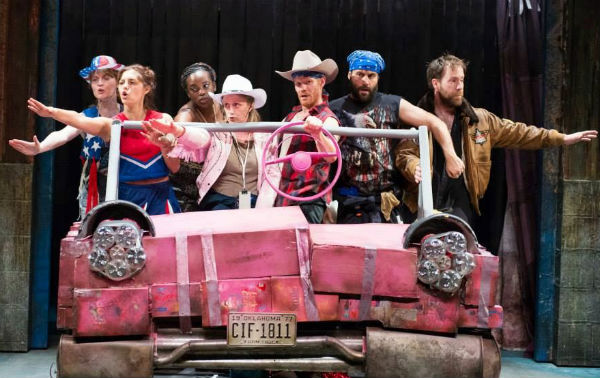 Apocalypse survivors perform an episode of The Simpsons in Mr Burns

I haven’t read them all but a glance at the headlines as they whizzed by in my Twitter feed alerted me that the UK premiere of Anne Washburn’s “post-electric play” Mr Burns had received some bad reviews from critics last week.

Undeterred, I showed up at the Almeida for Saturday’s matinee. Look, there’s no denying that this is a Marmite show. At the performance I attended, it was notable how many more empty seats there were after each of the two intervals. At one of the intervals, a nice French lady attending on her own struck up a conversation with me. Did I have any idea what was going on?, she wanted to know. I had a pretty good idea, I told her. She confessed complete mystification, not least because she’d never seen a single episode of The Simpsons. I’m not sure if she stuck it out until the end.

I did and, though, I enjoyed the third act the least – I really wanted to find out what had happened to the individual characters we met in the first two acts – I’m glad I did. Unlike the French lady, I have seen a few episodes of The Simpsons, but not that many and not the ones so central to the play’s telling. So yes, I was a fatigued with Bart and “America’s family” after two hours and 40 minutes.

However, throughout, the premise intrigued me. Post-apocalypse, what survives? Our need to tell stories – and to share them through performance, through theatre – is innate, suggests playwright Anne Washburn. I agree and I find that comforting.

And, it’s not just about art, it’s about identity. A scholarly programme note by psychologist Charles Fernyhough, “Remembering the Self”, explains: “Memory is our past and future. To know who you are as a person, you need to have some idea of who you have been… Lose your memory and you lose a basic connection with who you are.”

What’s more, Fernyhough asserts – and this really appeals to my recent fascination with memory matters after my father’s delirium scare – because memory is faulty, interpretative and always filtered “through a prism of intervening selves” – memory is the ultimate form of narrative. Memory, he says, “makes storytellers of us all”.

When the survivors in Mr Burns slavishly recall the exact lines of Simpsons’ episodes or recreate TV ad breaks, they are exercising their collective memory muscle, attempting to remember a lost society and retain an identity that is quickly slipping away.

If you want more memory food for thought, check out Charles Fernyhough’s book Pieces of Light: How We Imagine the Past and Remember the Future or his many articles for The Guardian, including this one on “The Story of the Self”, which is the basis for the Mr Burns programme extract.