Martin Freeman speech & the ‘exemplary’ young people behind the Mousetraps

Home-Martin Freeman speech & the ‘exemplary’ young people behind the Mousetraps

Martin Freeman speech & the ‘exemplary’ young people behind the Mousetraps 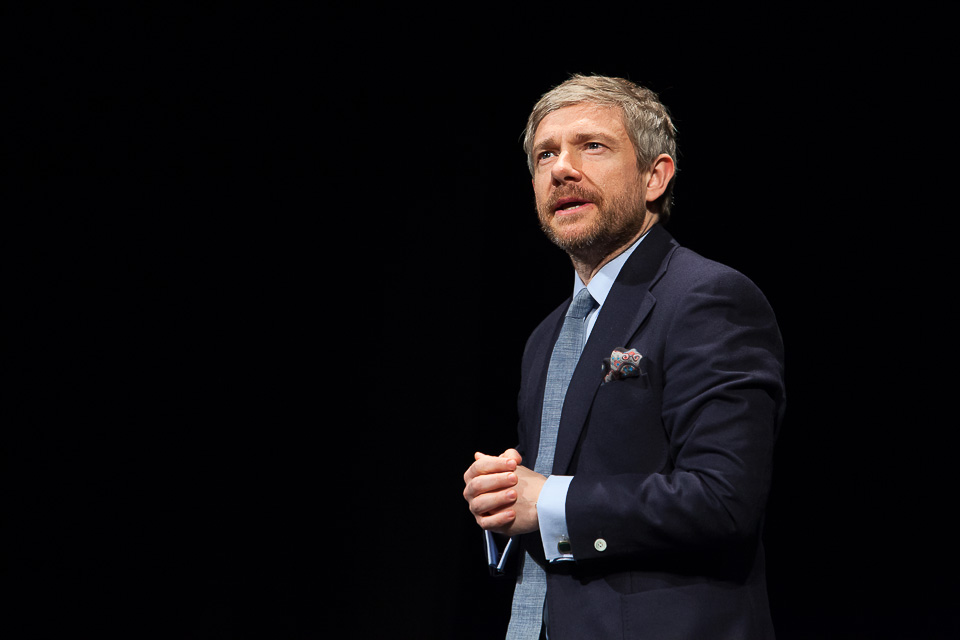 From my own experience seeing the play, the only bad audience behaviour I witnessed was from a pair of fifty-something women constantly checking email on their smartphones in the row ahead of me.

At the time, Freeman himself vehemently defended the show’s younger audience members. In an interview with the Telegraph, he joked:”I would love to be clapped every time I came out but, alas, no.” He went on to explain: “At the first preview on my first exit, there was a smattering of applause from about 15 people and that was it. From that grew this idea that it was like the Fonz coming on, which frankly wasn’t true. I think people put two and two together – the fact there are a lot of female fans knocking around, so if they’re in the audience they must be clapping.

“There were a lot of first-time kids who came here and people maybe assumed that they would behave in a certain way, but I have to say with very few exceptions, the under-25s who have been in have been exemplary. Yes, there has been the odd phone going off, but that’s as much a 56-year-old as a 25-year-old.” – Martin Freeman

“There were a lot of first-time kids who came here and people maybe assumed that they would behave in a certain way, but I have to say with very few exceptions, the under-25s who have been in have been exemplary. Yes, there has been the odd phone going off, but that’s as much a 56-year-old as a 25-year-old.”

Mousetrap provides access to theatre for all young people

So, how right this week that those younger audience members should honour Martin Freeman, naming him Best Male Performer for Richard III  in this year’s fourth annual Mousetrap Awards. “The Mousetraps”, founded and run by the Youth Forum members of the Mousetrap Theatre Projects charity, are voted for exclusively for young theatregoers aged 15-23.

I was delighted to attend the ceremony on Sunday at the Charing Cross Theatre, along with Freeman (whose heartfelt speech is below in full) and other winners and guests. I’m happy to report that the young audience were once again “exemplary”.

There was not a single mobile disruption, cheering was all at highly appropriate moments, and this audience were respectfully engrossed by not just the winners’ speeches but by performances by peers that included two Shakespeare monologues, a harpist and a spoken-word poetry trio (care of the brilliant Rhythm of Men – watch out for these guys). I never dared such a programme when running the WhatsOnStage Awards, and I certainly can’t see that happening at the Oliviers or any other ‘adult’ awards ceremonies. Just who is the more sophisticated audience here?

Congratulations to all of this year’s Mousetrap winners. But an even bigger congratulations to the young people who conceived these awards, who came up with such wonderfully named categories, and who compered, presented, performed at, stage managed, produced and organised the whole shebang. If these bright young things are the future of our industry, we’re in good hands.

“What a lovely honour to be here. Thanks for coming. I know it’s not all for me, but some of it’s for me. [laughs]

“I’m quite jet-lagged, excuse me. I’ve just come back from doing some filming, but I wouldn’t have missed it for the world. I never miss an opportunity to… pick up an award. [laughs]

“I was very lucky. I joined a youth theatre when I was 15, in my local area in Teddington, in the suburbs. It was an open door policy. And this was where I learned almost everything, pre drama school, about how to be an actor and that that might be possible for me one day. I was very lucky in that I’ve been managing to do that for 20 odd years.

“So I would like to thank Jamie Lloyd and Rich, our lovely staff director… It was a thorough joy. The hardest I’ve ever worked. And the young people out there – well, everyone’s younger than me here – but people should know, it’s hard work. I never worked harder than I did on Richard III but it was a real pleasure.

“It was a honour for us to get so many young people in [to see the show], that was a goal of ours. So thanks for coming and thanks for awarding me this.

“I genuinely was more deserving than James McAvoy!” [laughs]