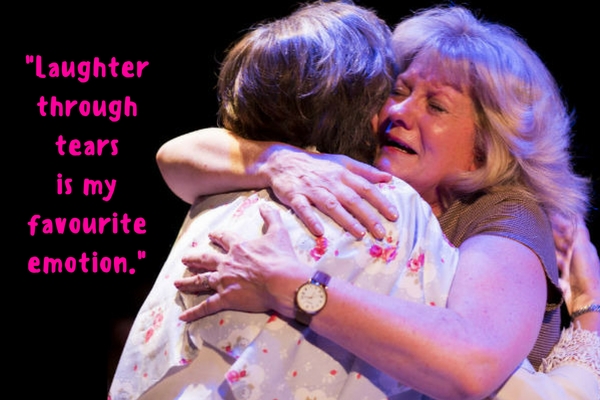 If the line “Laughter through tears is my favourite emotion” makes you nod your head, then you must see the play from which it comes: Robert Harling‘s Steel Magnolias, now revived at the Hope Theatre. If you’ve already seen the 1989 film of the same name, which was released two years after the stage original – you know the one: Julia Roberts, Sally Field, Dolly Parton, Daryl Hannah, Olympia Dukakis and Shirley Maclaine – don’t let that dissuade you, regardless of whether you loved or loathed it.

The play is much different, and much better. It focuses on the relationships between the six ordinary/extraordinary Southern women who congregrate in Truvy’s beauty salon in small-town Louisiana, initially on the day of young Shelby’s wedding. In Matthew Parker‘s sparkling production in the tiny Hope Theatre, you’ll feel like you’re a customer queueing up for the hair dryer, enjoying the banter, feeling the bonds of deep and abiding friendship. The type of friendship that can, and must, get you through the worst of times.

I do not lie when I admit that I was both laughing and crying in nearly equal measure on the night I attended (with the balance tipping towards the former). And much of it thanks to many of these 25 lines, delivered with drawl and panache by the ensemble of women: Stephanie Beattie, Ariel Harrison, Maggie Robson, Lin Sagovsky, Samantha Shellie and Jo Wickham. Scroll down for further on-the-night (or near enough) tweet reactions.

Book your appointment, ladies – and men too! Steel Magnolias continues at the Hope Theatre until 3 September 2016.