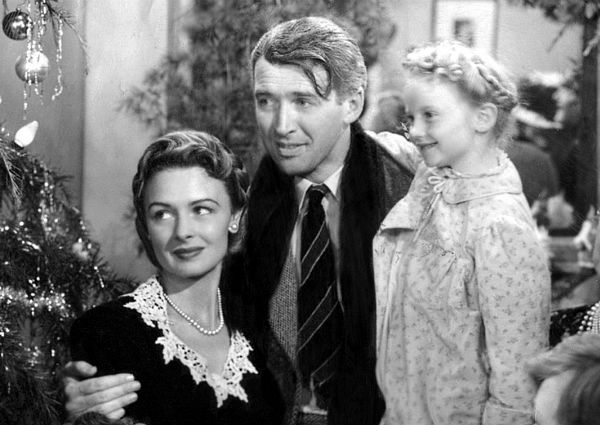 Frank Capra’s 1946 classic It’s a Wonderful Life, starring James Stewart as everyman George Bailey, is probably my favourite film of all time. It’s certainly the one I’ve seen more times than any other. Quite frankly, I’ve lost count of the number of times I’ve seen it. Definitely once – or sometimes twice, thrice or more – every Christmas.

One of our family traditions is to watch It’s a Wonderful Life on Christmas Eve, and I am the very strict guardian of this tradition. Brooking no excuses, I herd my nephews and niece onto the sofa with me, even if they’re half-asleep – and, when some years we don’t press play until nearly midnight, almost everyone (bar me) is asleep by the end. I’ve also forcibly applied the tradition onto any new relationship.

Last Christmas, I spent my first with my other half Peter’s family in Surrey. I was astounded when so many of them confessed they’d never watched It’s a Wonderful Life – now they have. Though they might not have heard every word out of the actors’ mouths: I know the film so well that I have the annoying habit of reciting whole chunks of dialogue as the scenes unfold.

A wonderful day today: I get to read & talk about It’s a Wonderful Life & call it work. Visiting @IAWLTour rehearsals pic.twitter.com/baFBindw2Y

So, imagine my delight, when producer James Seabright asked me to sit in on rehearsals of his new radio play production of It’s a Wonderful Life… And to interview the lovely director and cast members bringing a story I hold so personally dear to vivid life onstage… There’s only one word for it: wonderful.

To my astonishment: after years of devotion, I learnt several new things about It’s a Wonderful Life as part of this experience. Not least: it’s not just for Christmas, and was never intended to be. Which is why, now, a production launching in June feels just right.

My interviews with the company also appear in the programme for It’s a Wonderful Life, which opens this week.

How did this production come about?

I’ve worked with Rob Harris, who runs Climar Productions, for five years. It was his suggestion, having seen another production in Canada. This version was adapted by Tony Palermo, and it’s been done all over America. There have been a number of adaptations of It’s a Wonderful Life done here in the UK, including a musical version, but amazingly, it’s never been done here as a radio play before. 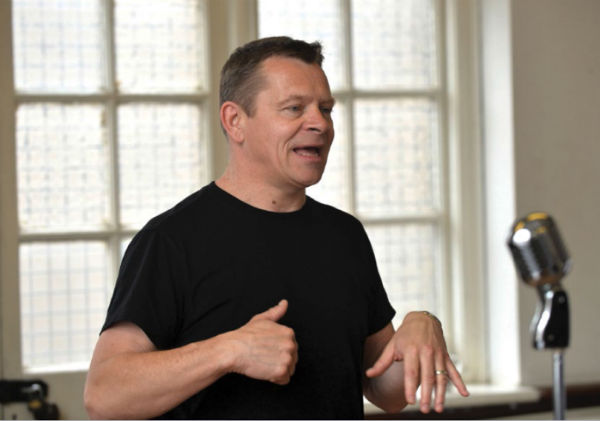 I was nervous when I first read it. Not in terms of the narrative, but rather the paraphernalia of what a radio play meant. The inspiration for Palermo was the Lux Radio Theatre in Hollywood, which in its heyday in the 1930s and 40s, would put on abridged versions of famous movies for radio broadcast. These would be done in just a spoken format, performed and recorded with large microphones and one take in front of a live audience. A bit like The Goon Show was done here.

“The key is: it’s not like a radio drama recorded in a radio studio; this is staged and performed in a theatre but designed as if for radio transmission… It’s a subtle but fundamental difference.”

The key is: it’s not like a radio drama recorded in a radio studio; this is staged and performed in a theatre but designed as if for radio transmission. If it’s in a radio studio, like a BBC Radio 4 drama, the audience doesn’t exist, whereas we do this very much acknowledging and responding to the presence of the audience. It’s a subtle but fundamental difference.

How faithful is the radio play to the December 1946 film?

It’s instantly recognisable. Palermo based this new adaptation on the original Lux Radio Theatre version of the film script, which was aired just months after the film’s release in March 1947, and had James Stewart and Donna Reed reprising their screen roles as George and Mary Bailey. But it is abridged to 90 minutes from the 130 minute film, so aspects of the story are covered more broadly and some of storylines for minor characters, like Violet, aren’t included. But I don’t think, as an audience member, you’ll feel like you’re missing anything because you get so caught up in the story and how it’s realised. 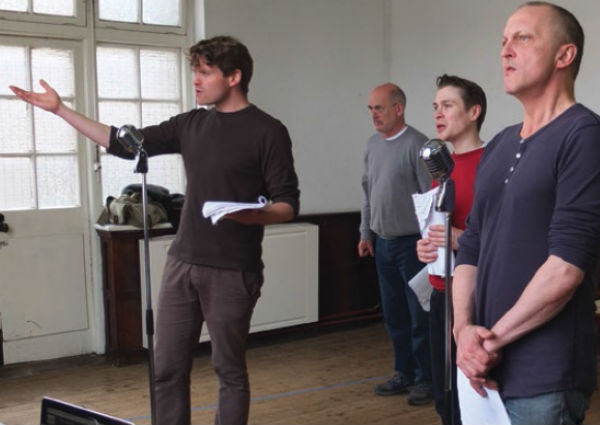 The radio play cast of It’s a Wonderful Life in rehearsal. © Steve Ullathorne

The film had a fifty-strong cast. What’s the secret to making it work with just six actors?

The company size for the radio play isn’t specified by Palermo – in fact, I don’t think he ever imagined doing it with such a small number of actors, but it works well. Only one actor, Oliver Stoney who plays George, sticks to a single role. The other 32 roles are divided up between the other five actors. It’s a Wonderful Life’s style of narrative storytelling suits this kind of multi-roling. It’s a story within a story anyway: the Superintendent telling Angel, Second-class Clarence Oddbody the story of George Bailey’s life before he goes down to earth to try and save him. So you already have that convention.

Why do you think the story of It’s a Wonderful Life endures?

It touches something fundamental in all of us: we all crave both freedom and security, which are frequently in direct opposition to one another. We understand George’s desire to be this adventurous, globe-trotting kind of Indiana Jones figure, which proves impossible for him to fulfil. For all of us, we are constantly asking ourselves these questions: are we brave enough? are we safe enough?

There are also inevitable political and social resonances that feel very modern. There are those who believe in the state, and in setting up a system that helps people who don’t have anything, who can’t help themselves; and there are others who believe that those people are all wasters. That’s still true of our political life today. We’re in it, right now.

How difficult was it to cast the part of George, in the shadow of Jimmy Stewart?

I’ve always loved Jimmy Stewart as an actor. He had a great warmth and a great sense of humour. Trying to find his kind of charisma in a young, or relatively young, actor can be difficult; a leading man type who wants to ‘build bridges a mile long’ and at the same time can be bumbling. I could see that good-looking but goofy quality in Oliver Stoney. He’s very engaging, very warm, and he’s always got a twinkle in his eye. I also like his height – that sounds superficial but it’s not. Jimmy Stewart was quite a tall guy, and it helps with the style of the piece that you never lose sight of George. 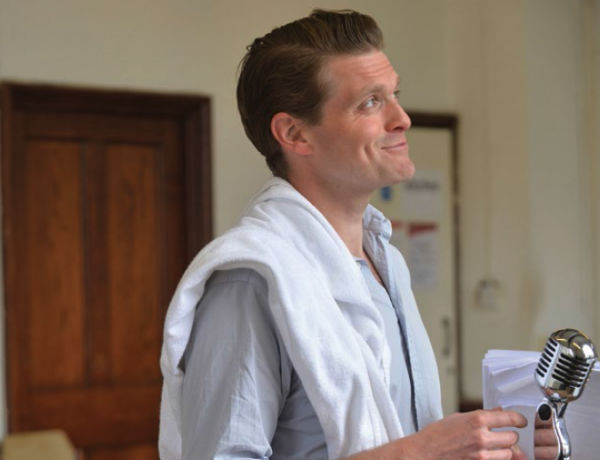 Many critics – at the time of its release and in the 69 years since – have dismissed It’s a Wonderful Life as overly sentimental. Do you agree?

I remember once thinking that too, long before I was involved in this project. In my late 30s, I remember having this vague memory of It’s a Wonderful Life being a ‘nice’ film, and then sitting down to watch it again for some reason. As soon as we get to that scene in the drugstore, Mr Gower is sitting in the back and he’s really drunk, and when the boy, young George, comes in, Gower hits him so hard. This is not a brutal man hitting a young boy, it’s an ordinary man who is extremely upset after the death of his son, though we don’t know that yet. But the physicality, the viciousness of that – that’s not overly sentimental, that’s real. And there are those hard edges, those film noir moments, throughout. Just when you think the story is becoming too soft or easy, it becomes something quite different.

“Of course, we have the outpouring at the end. But that also feels real: there are people who inspire others to do good and George is one of those people.”

In terms of how Bedford Falls is set up as this almost idyllic small town, Frank Capra does that deliberately because then he breaks that image up completely with what becomes a sort of crack city in Pottersville. But just look at the reality of the ending: the money is never returned. Potter keeps hold of it and he gets away with it.

Ultimately, of course, we have the outpouring at the end. But that also feels real: there are people who inspire others to do good and George is one of those people.

Do you watch the film every Christmas?

I’m definitely a fan of the film; I’ve seen it probably eight times. Watching it is not a Christmas tradition for me, though I’ve thought a lot about the Christmas thing, particularly as we prepare to tour the show in the summer and autumn. Although it takes place at Christmas, I don’t think it’s a Christmas story – and neither did It’s a Wonderful Life [who wrote the short story, The Greatest Gift, that provided the inspiration for It’s a Wonderful Life]. The present of the story happens to be Christmas time, but the whole of the story is not. I’ve watched the film at all sorts of different times of year. And every time I’ve gone back to watch it again, it’s surprised me.

Read interviews with members of the cast here.

It’s a Wonderful Life opens at Malvern Festival Theatre on 9 June 2015 and also visits Guildford, Oxford and Richmond this month. The tour resumes from 7 October to 6 December 2015, hitting 33 venues across the country – including one in Bedford (not quite Bedford Falls, but almost).