“I clapped so hard I dented my ring” + Press pass: All the reviews and news on Mrs Henderson Presents

Home-“I clapped so hard I dented my ring” + Press pass: All the reviews and news on Mrs Henderson Presents

“I clapped so hard I dented my ring” + Press pass: All the reviews and news on Mrs Henderson Presents 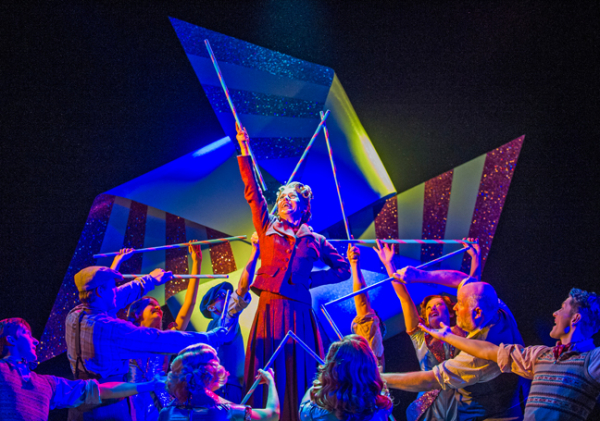 I gave Mrs Henderson Presents a very enthusiastic response at the curtain call of last night’s West End premiere – so enthusiastic that, as I tweeted at the time, I dented my ring. This is not good, it was my favourite ring, but I couldn’t help myself and I don’t begrudge the show. (A helpful Twitter follower advised me to remove jewellery in future: noted.)

Reading a few of this morning’s verdicts, I have that curious feeling of wondering if we all saw the same show. If I think hard about it, sure, I can understand some of the criticisms – the narrative may be a little thin, the politics of the period may be underplayed, the patriotism may border on cheesy, and yes, no getting around it, the women do display their breasts – but I don’t care. I absolutely loved this show. And, far from offensive, as a woman (and general sentient being), I found the nudity was in no means distasteful or gratuitous – it was celebratory, respectful and, ahem, uplifting.

But the clothes don’t come off (sparingly) for quite some time. Long before that, indeed, from the moment that Jamie Foreman‘s emcee takes to the stage to invite the audience to “sit back in your seats, you’re all in for a treat”, I was spellbound in an evening that is amusing, touching and pride-inducing at turns, unashamedly nostalgic for “that decent, decade England that bred” us and toe-tappingly tuneful throughout.

My personal highlights – and my friends and I discussed many more at length while still feeling buoyant over post-show dinner – were:

the “Lord Chamberlain’s Song”, a sort of Modern Major General with hilarious choreography by Andrew Wright, during which a feisty Tracie Bennett (playing beautifully against type as the aristocratic Mrs Henderson) persuades the lord (a stiff-upper-lip Robert Hands) that nude, stationary women should not be censored (okay but, he says, “I’ll close you down at once if any titties move”); the deliciously cheeky (pun intended) scene where Emma Williams‘ tea-girl turned titillator Maureen demands the male stagehands undress before the shyer Windmill Girls will do the same ; Ian Bartholomew‘s “Living in a Dream World”, in which he worries for his fellow Jews in Europe; the bare-chested defiance of the women as the bombs fall on Soho during the Blitz (just typing that chokes me up); and the proud anthem fashioned from the real Windmill Theatre’s motto “We’ll Never Close”. 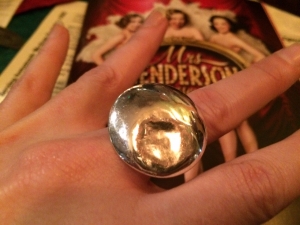 Strenuous ovation: I clapped so hard I dented my silver ring

Whatever happens with Mrs Henderson Presents, I hope that “We’ll Never Close” becomes a showbiz, showtune standard of the likes of “No Business Like Show Business” and “Another Opening, Another Show”.

So I say, go see Mrs Henderson Presents, help make it a great big hit. And, let me give a few more credits: book and direction by Terry Johnson, music by George Fenton and Simon Chamberlain, lyrics by Don Black, musical direction by Mike Dixon (striking up a lively repartee, while conducting, from the pit), and sparky performances from supporting cast including Samuel Holmes as “bowling from the pavillion end” Bertie, Matthew Malthouse as handyman turned fighter pilot Eddie and Lizzy Connolly as no-fuss Northern lass Windmill Girl Doris (“well, this makes a change from the co-op in Darlington”).

As an opening night bonus, the cast were joined onstage at the curtain call by many of the original Windmill Girls, most of whom are now in their 80s (and one a sprightly 97).

I’ve gathered reviews, interviews and news (including the show’s just announced Canadian premiere) below. Scroll down for show tweets from me and my first-night companions, including composer, lyricist and book writer Robbie Sherman, who previously worked with Emma Williams on A Spoonful of Sherman and, through his father, Chitty Chitty Bang Bang. 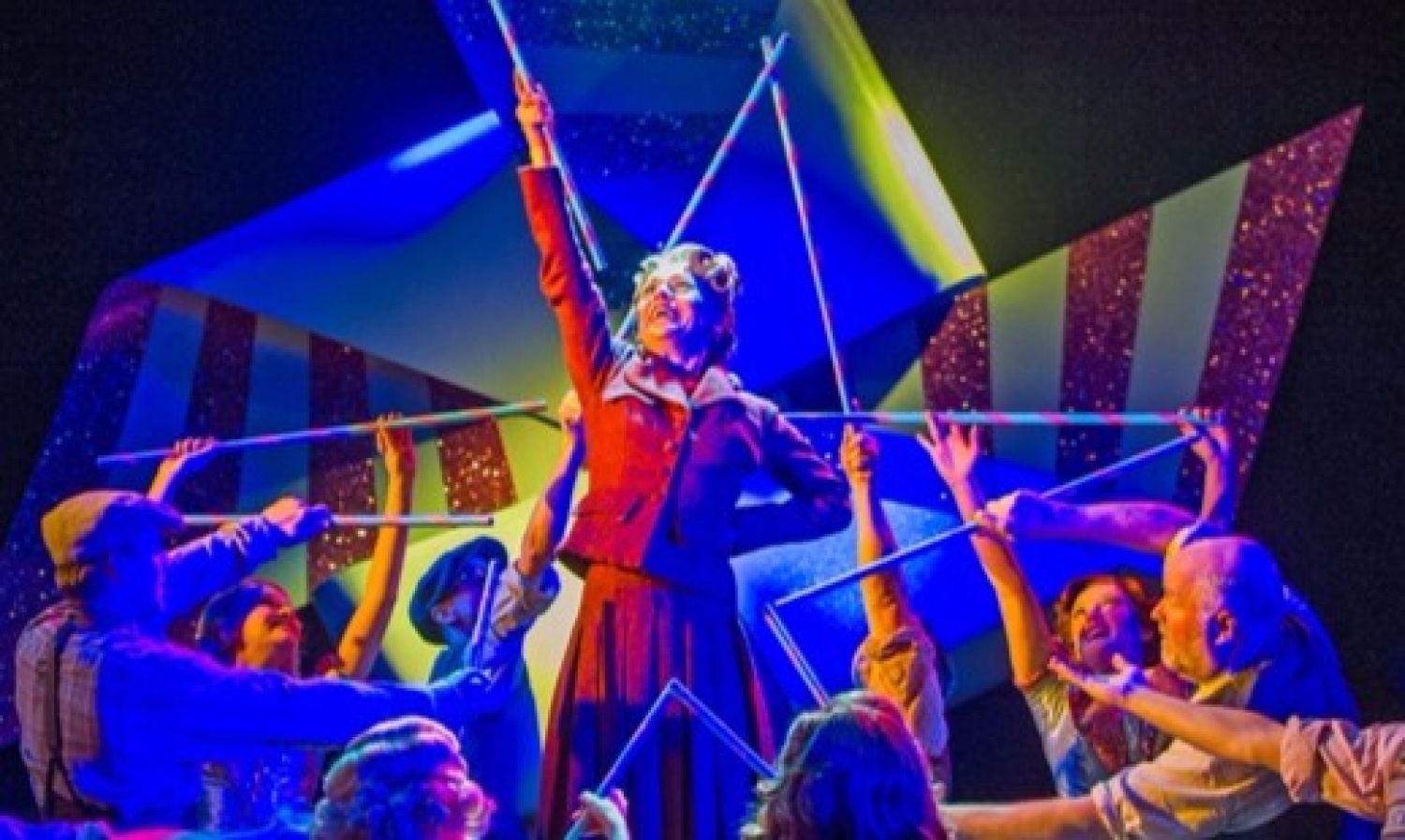 ★★★★ – THE TIMES
Ann Treneman: I cannot imagine in what universe this musical is not going to be a hit… It is based on a true story that also inspired the 2005 film with Judi Dench and Bob Hoskins, but this musical is better. The songs are memorable and very hummable and the lyrics, by Don Black, are absolutely terrific. And, of course, it has nudity… It’s a winner, with a hearty patriotic pep to it: here’s a play with boobs but no boobs, if you know what I mean. 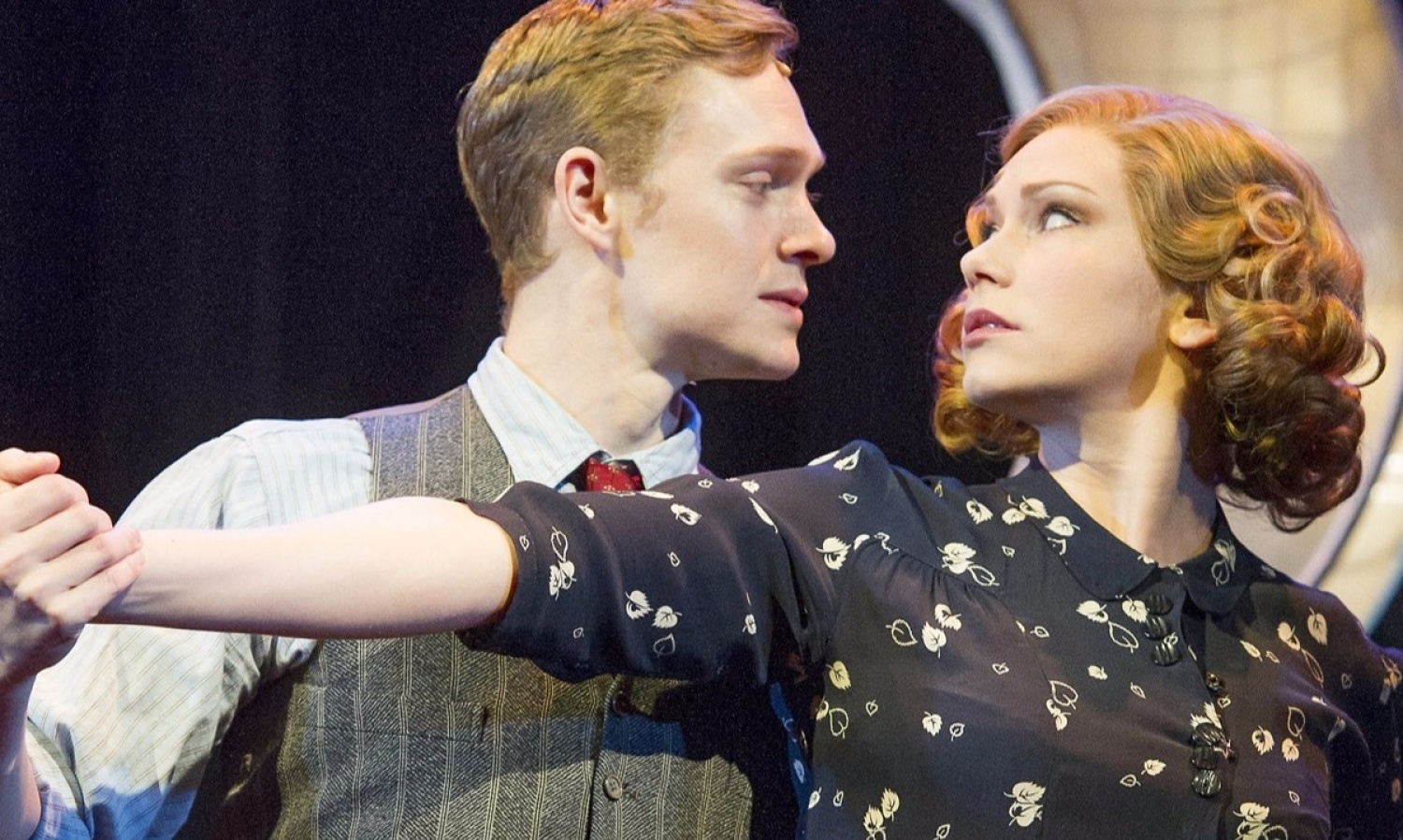 ★★ – EVENING STANDARD
Fiona Mountford: Let’s not beat around the euphemism: this is a show about breasts, getting them out and their small but vital role in the defeat of Hitler… How dispiriting it is to see a West End stage in 2016 filled with topless women. I am by no means alone in finding the “it’s all just good, honest fun” argument long expired… The Windmill famously never closes and the tops stay off. We are asked to take this as a victory for Blitz spirit. I could think of better examples. 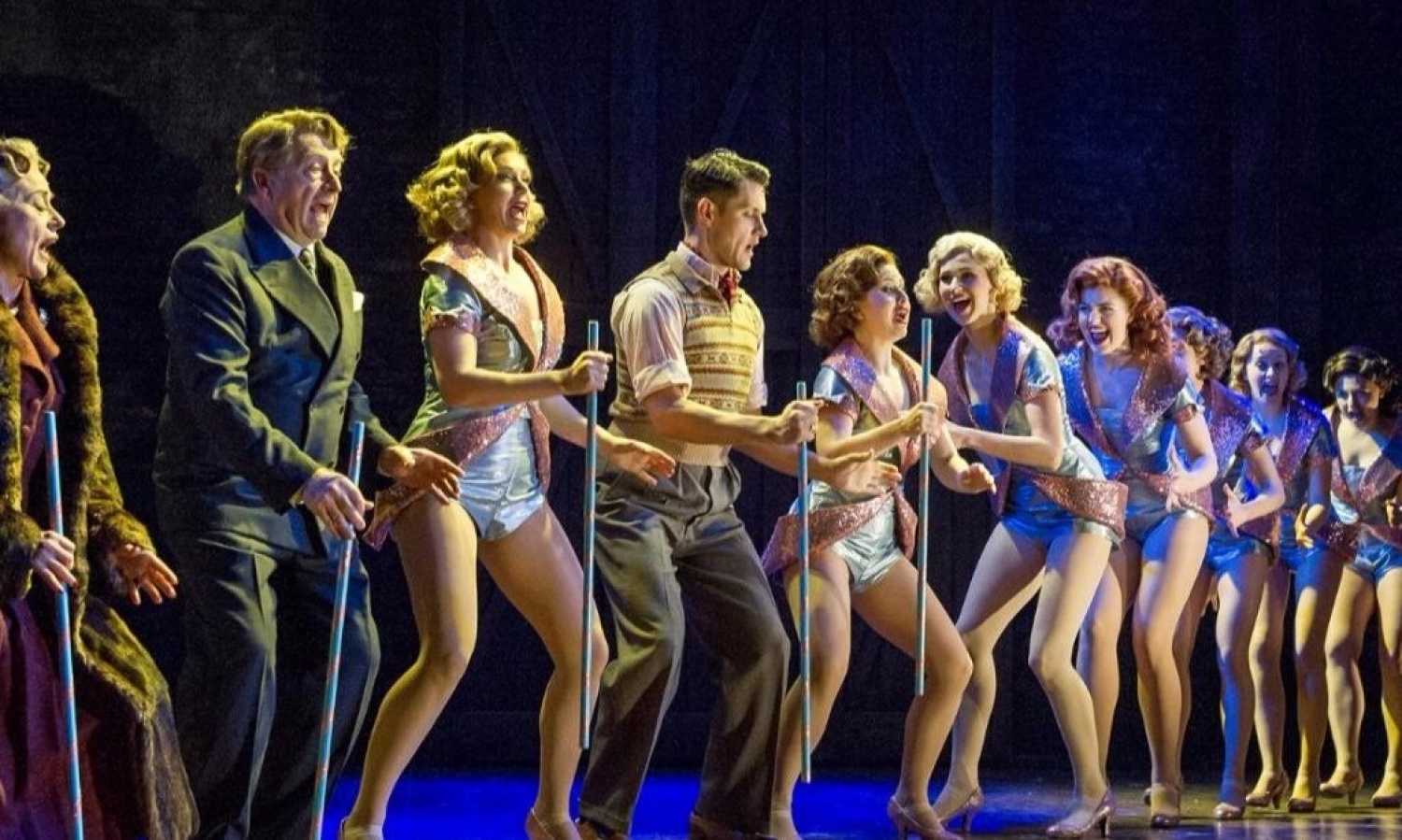 ★★★ – TELEGRAPH
Dominic Cavendish: The full-frontal display of female flesh on view at the Noël Coward makes the show, ahem, an undeniable hot ticket… Although it may sound disingenuous, there’s something touching about the recaptured innocence of it all… This feels like a semi-triumphant evocation of a bygone demi-monde: there’s something missing, and it’s not the clothes. 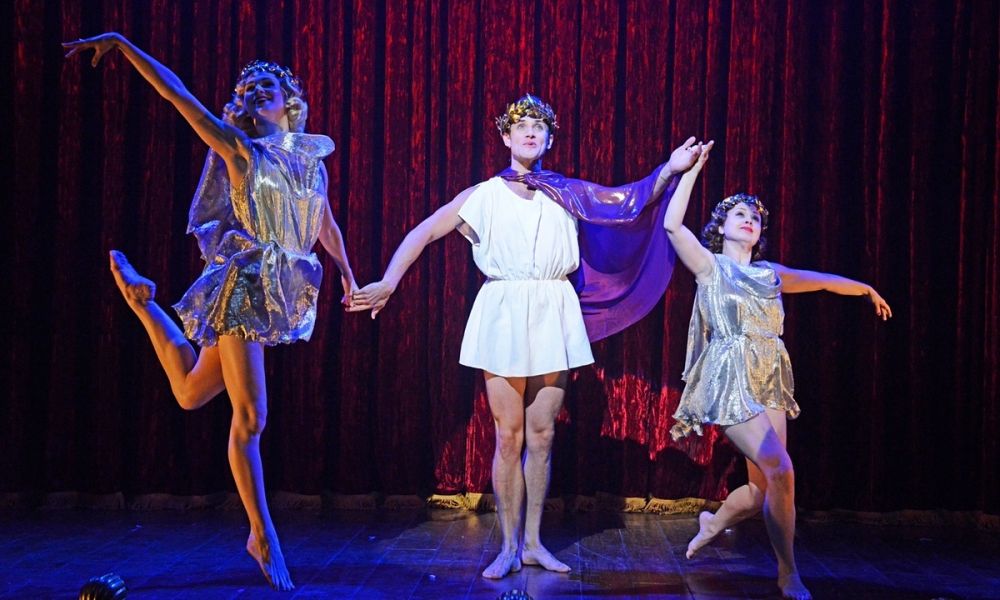 ★★★★ – GUARDIAN
Michael Billington [From Bath run]: It’s a cliche that, ever since Cats, musicals have tended to sacrifice national identity to become international franchises. One of the cheering things about this is its defiant Britishness: it’s no accident that book and direction are in the hands of Terry Johnson, who revived two of Joan Littlewood’s hits at Stratford East, and who recaptures something of their festive élan. 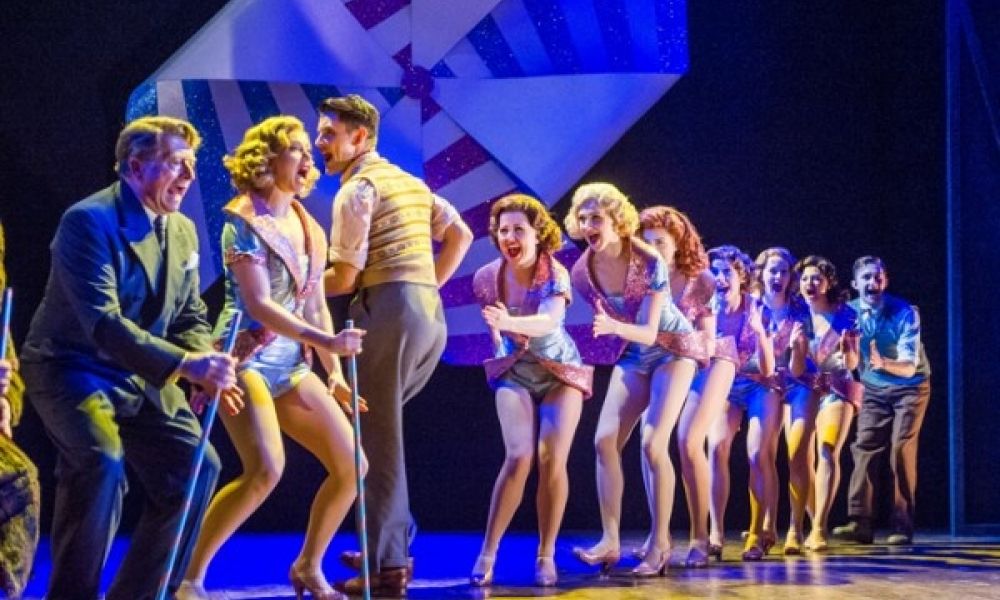 ★★★★ – MY THEATRE MATES > Jonathan Baz
Jack Clements: It’s what is going on behind the curtain that makes Mrs Henderson Presents such an epic statement on the country’s chaos… It certainly doesn’t fail to capture our attention – but quite unexpectedly it manages to capture our hearts as well. 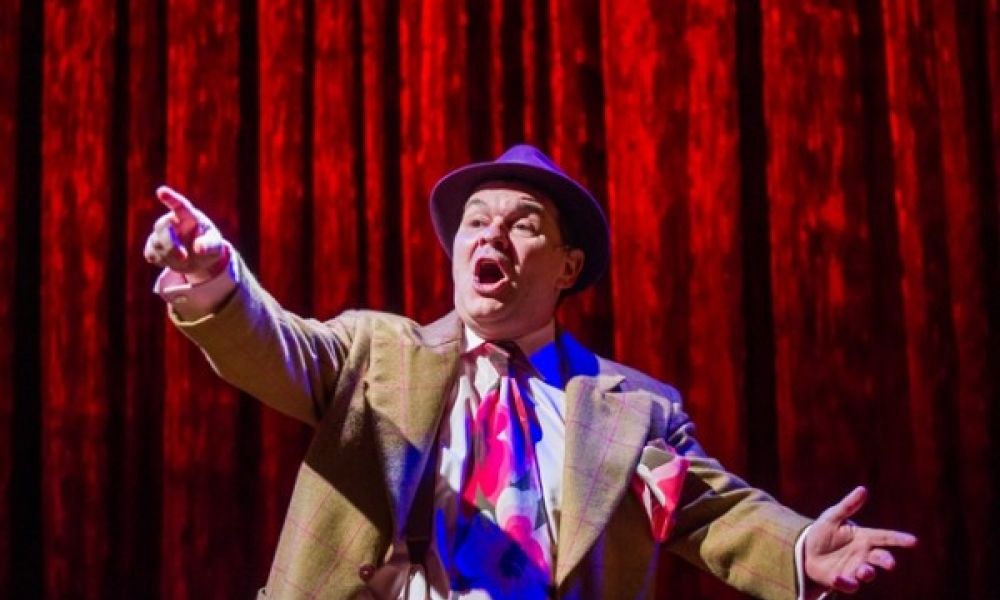 MY THEATRE MATES > Edward Seckerson
The old gags are the best, they say – or just the oldest – and in this hugely enjoyable adaptation of the movie Mrs Henderson Presents they come thick and fast from the mouth of the show’s very own Emcee Arthur (Jamie Foreman)… 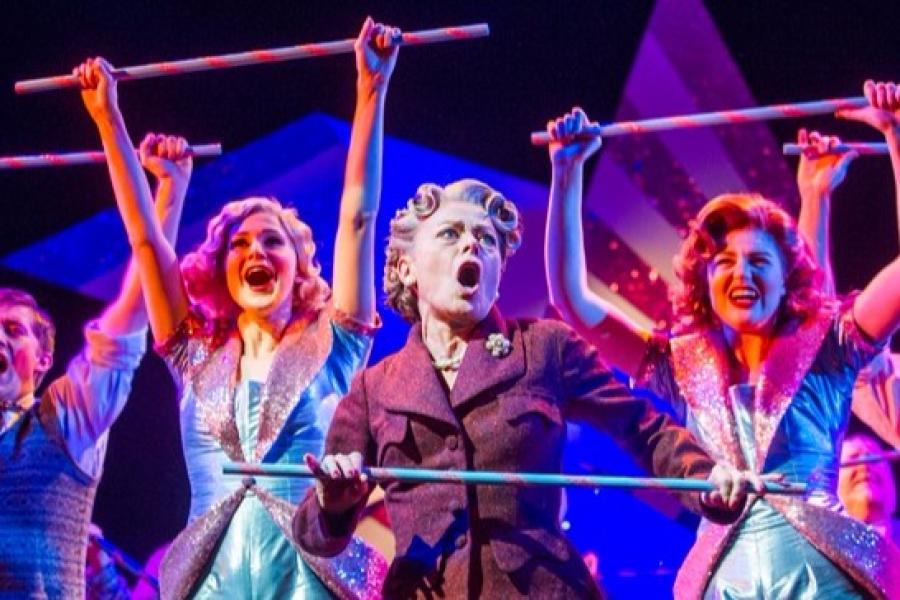 ★★★★ – THE STAGE
Mark Shenton: New British musical suffused with charm, warmth and sincerity… The score has an easy, accessible pastiche quality, in a similar vein to The Boy Friend, that channels composers who were active at the time, like Ivor Novello and Vivian Ellis… I’m happy to report that this show is no bomb, but scores a direct hit of its own. 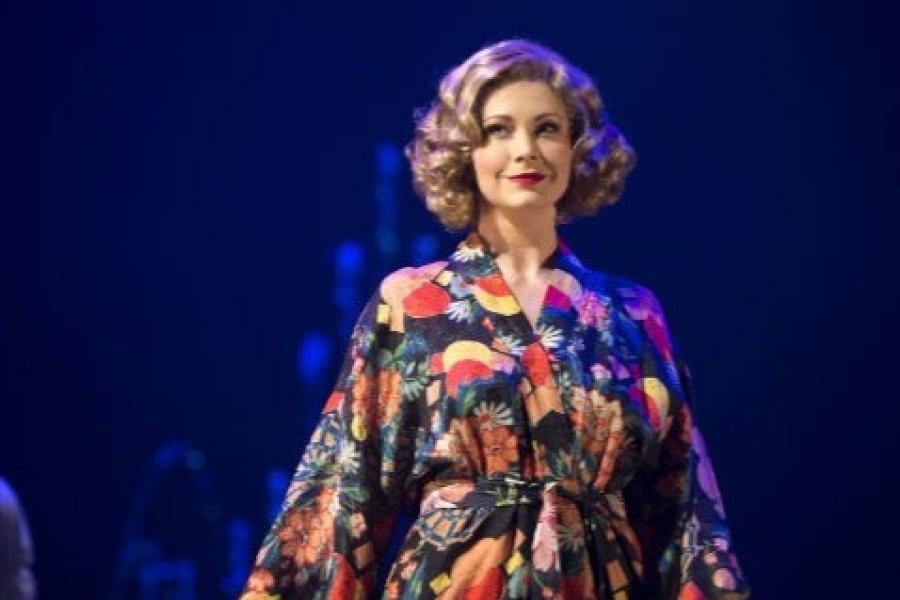 THE ARTS DESK
Marianka Swain: As the tea girl-turned-Venus, honey-voiced Emma Williams is the standout turn, finding gravitas in even the most anodyne of Don Black lyrics (her big 11 o’clock number involves the climbing of mountains – though no Mother Abbess in sight). 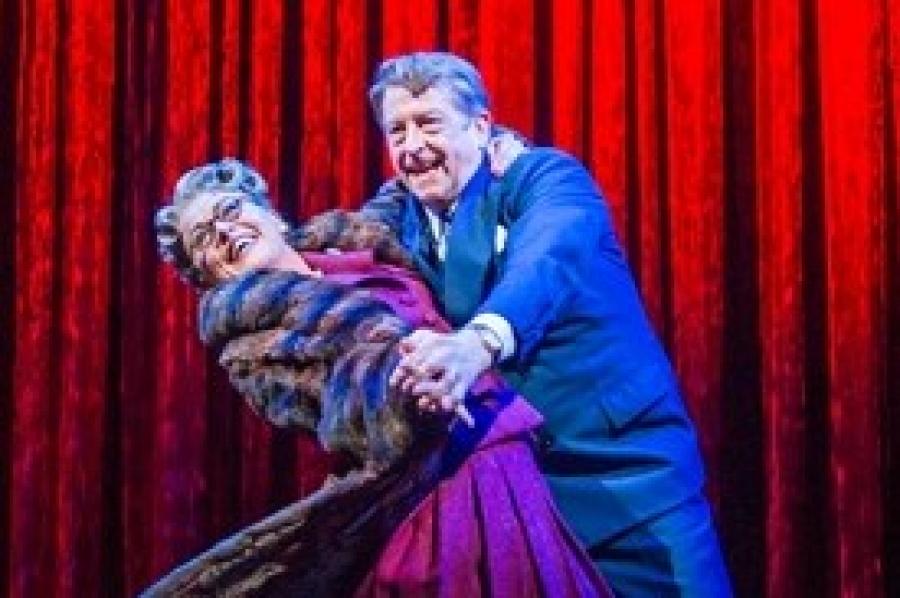 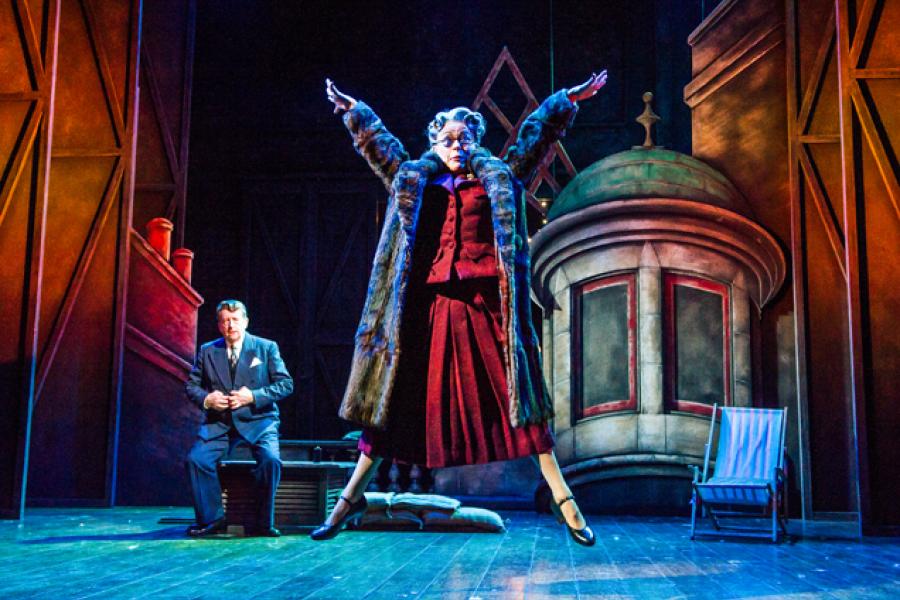 ★★★★ – REVIEWS HUB
Scott Matthewman: Despite the wartime setting, the stakes never feel quite high enough; the risk of losing it all is always too far away. Mrs Henderson Presents is still a fine evening of entertainment. 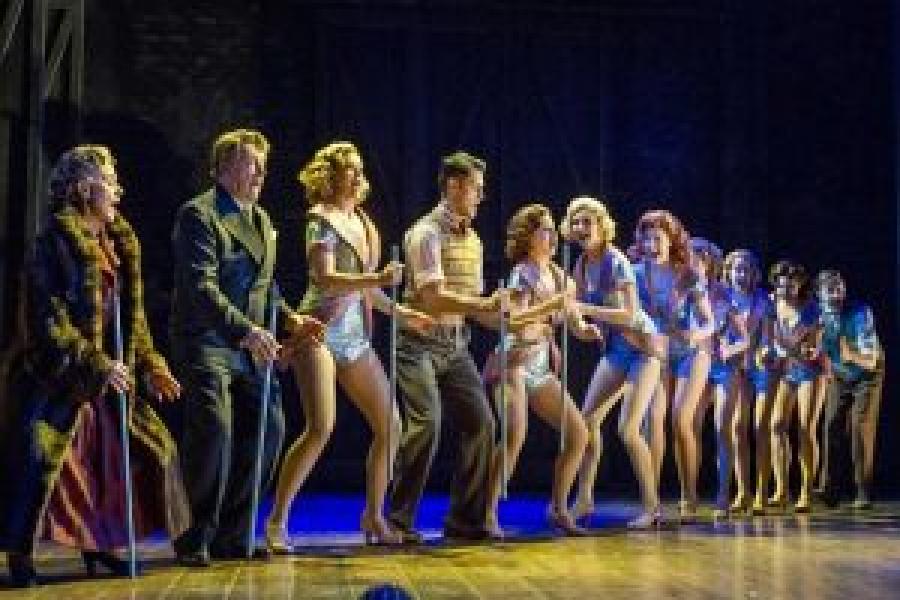 ★★★★ – LONDON THEATRE
Mark Shenton: A striking quartet of beautiful young women, led by Emma Williams as the tea-girl turned living statue, are beautiful — but the phwaor phwaor factor is mitigated by establishing their human vulnerabilities first. 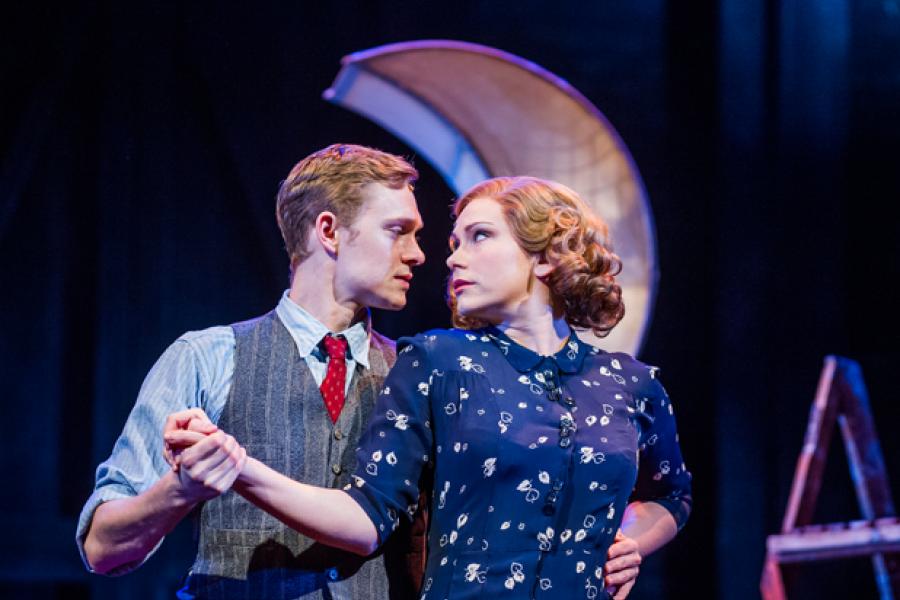 ★★★★ – THEATRE 1
Patsy Trench: The mystery is why Mrs Henderson Presents has taken so long to get from movie to West End musical… As British as Marmite and as old-fashioned as a wind-up wireless, it is what it sets out to be: a thoroughly enjoyable night out. 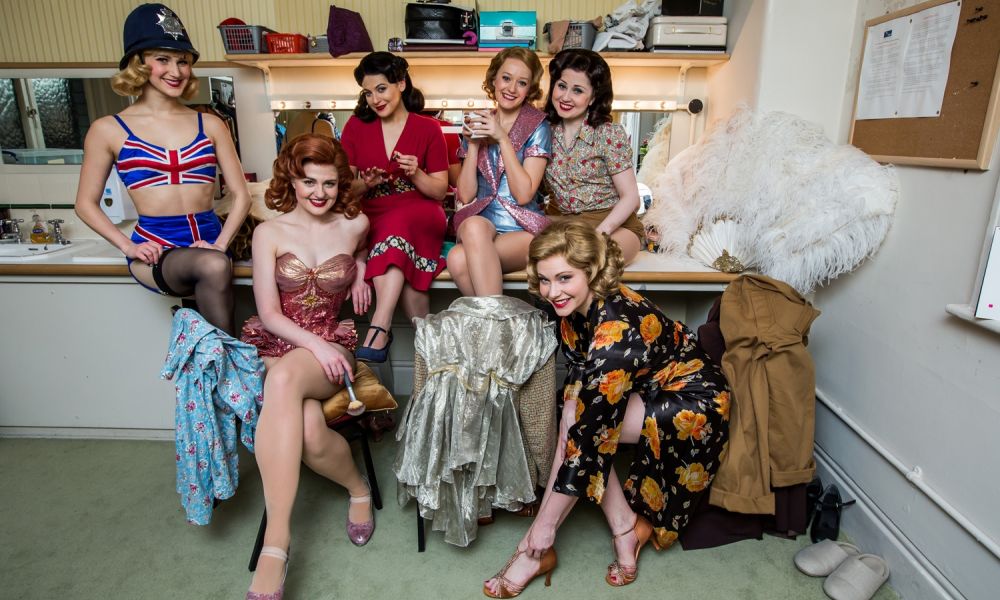 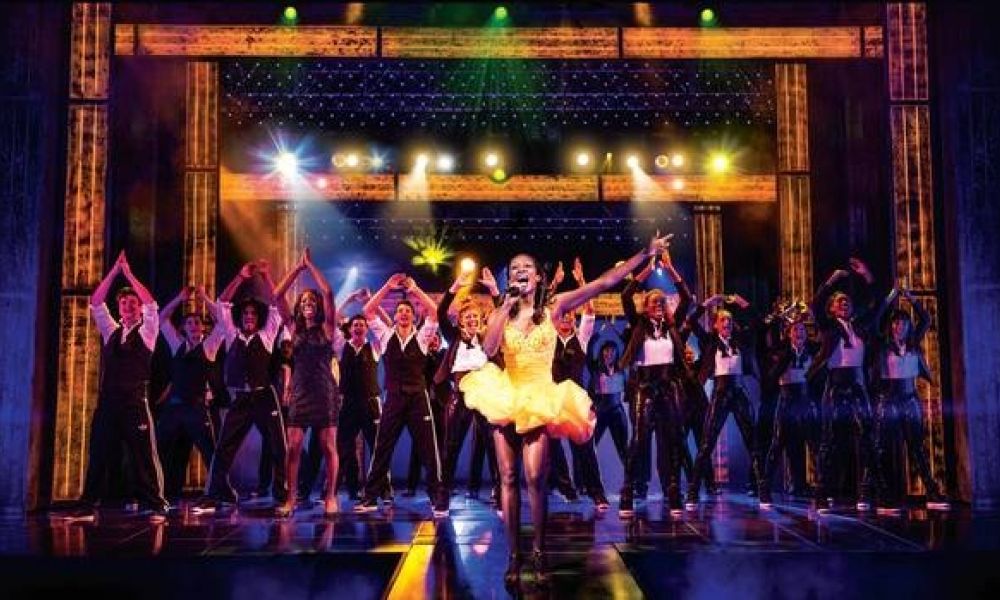 Mrs Henderson Presents is one of five new musicals receiving Toronto premieres
The pre-Broadway run of the Newfoundland-set musical Come From Away, the latest spectacle from Quebec circus troupe The 7 Fingers, a thriller from Toronto playwright Nicolas Billon – and…

First night feature: Mrs Henderson Presents
Matthew Amer: Mrs Henderson Presents pulls off the clever trick of having the heart and soul of a classic musical while harbouring the most relevant ideas about hiding from the realities of life and conflict… In a nutshell? The stunning Emma Williams gives the most fearless performance you’ll see this year in this brilliantly British tale of pluck, fight, blitz spirit and heart. 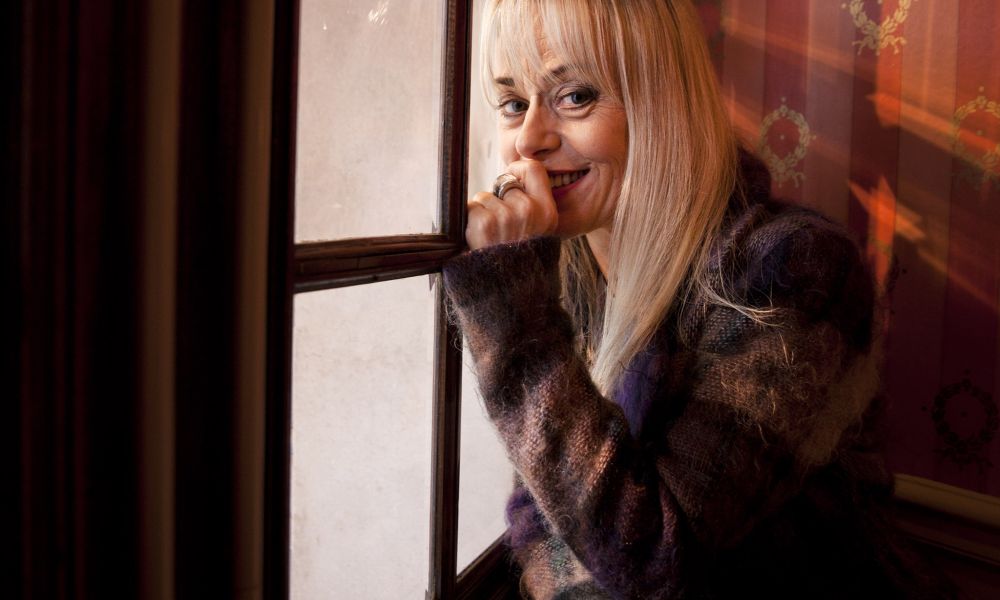 Former Coronation Street star on bagging the juicy role of Mrs Henderson
Tracie Bennett is chatting to me in between mouthfuls of baked potato, beans and cheese during a break from rehearsals of the musical Mrs Henderson Presents, in which she plays the title role… 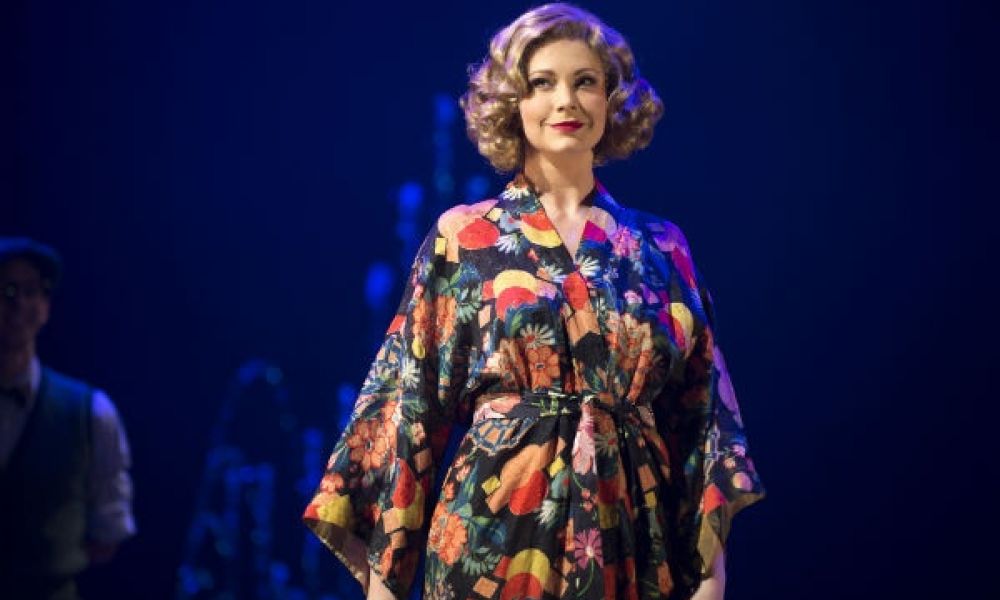 Emma Williams on Mrs Henderson Presents
Emma on Tracie: “I did my very first job ever with Tracie – when I was 14, in Heartbeat, I played a Girl Guide getting lost on the moors of Yorkshire, and she was my Girl Guide captain! I’ve worked with her four times now.”