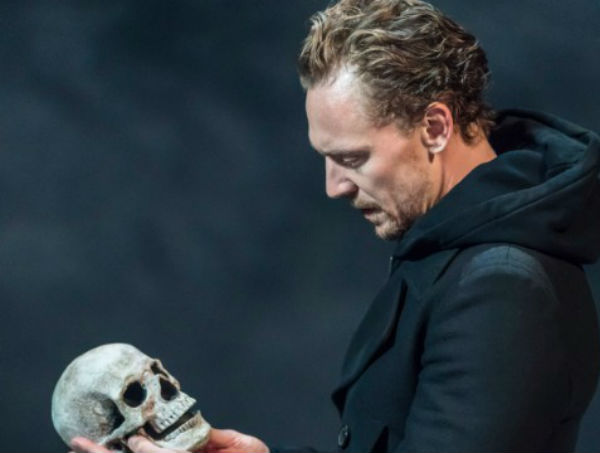 Tom Hiddleston stars as Hamlet at RADA until 23 September 2017

Did you get lucky in the ticket ballot for #RADAHamlet, which on Twitter has also gained the predictable #HiddleHamlet hashtag thanks to its title star, Tom Hiddleston? The fundraising production, directed by none other than Kenneth Branagh (who previously directed Hiddleson onstage in Ivanov and onscreen in Thor and has long wanted to direct him as the Great Dane), runs for three weeks only from 1 to 23 September 2017 in RADA’s 160-seat Jerwood Vanbrugh Theatre. So not many people did get so lucky.

Incredibly, amongst those who did were critics for three national newspapers, who even managed to get into the first performance on Friday night. And here’s what they had to say. (Let’s hope, in addition to their praise, they’re also correct in their predictions that the production may take to a larger stage in future.)

★★★★ – GUARDIAN
Michael Billington: Few shows are seemingly more exclusive than this… Hiddleston, as we know from past performances, is an accomplished Shakespearean actor… If I had to pick out Hiddleston’s key quality, it would be his ability to combine a sweet sadness with an incandescent fury. He suggests a fierce intellect gnawed by intense melancholy and yet subject to bouts of intemperate rage….In one way, it is sad that this production will be seen by so few people. But its purpose is to raise money in a good cause rather than to embellish reputations.And, even if it rarely shocks one into new awareness, it has clarity, swiftness and, in the person of Hiddleston, a compelling Hamlet with a genuine nobility of soul.
Read more >

★★★★ – THE TIMES
Ann Treneman: Hiddleston is a fine Prince from the get-go, when we see him sitting on a stage bare but for a piano, picking out the notes, singing a lament for his father (though, it must be said, he can’t sing). He makes the role completely his own, emotional, magnetic, canny, often frolicsome. The words seem natural, effortless. He bounds around the stage and his duelling is fierce… The only shame is that so few will see his HiddleHamlet.
Read more >

★★★★ – TELEGRAPH
Nataliia Zhuk: London has seen a spate of them in recent years; there are three different productions playing in the capital this weekend alone. But none has been as anticipated as this one since Benedict Cumberbatch played the Dane in 2015… This Hamlet hooks you in at once… It opens with Hiddleston’s sharp profile, silhouetted in front of a small piano. He sings “And will he not come again?” in a quivering voice… [Hiddleston’s]  Hamlet is proactive, masculine, edgy to the point of aggression – and definitely, absolutely sane. His madness is a ruse, through and through… You wouldn’t bet against Hiddleston returning to the role in a more public forum.
Read more >