Hacked off: Bean and Hytner put the Great back into Britain with political satire

Home-Hacked off: Bean and Hytner put the Great back into Britain with political satire

Hacked off: Bean and Hytner put the Great back into Britain with political satire 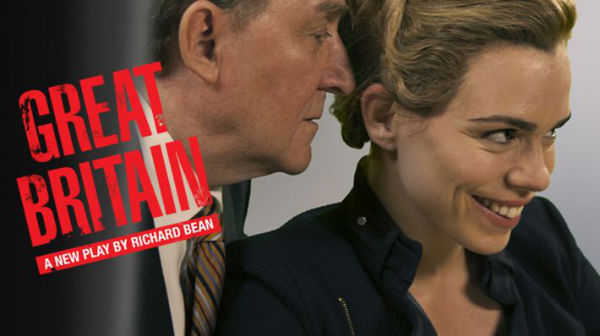 The News of the World phone hacking trial may have ended yesterday, but the drama continues at the National Theatre where, less than 24 hours after the end of the eight-month trial at the Old Bailey, outgoing artistic director Nicholas Hytner this morning finally confirmed rumours that Richard Bean has indeed been working on a tabloid journalism satire.

Not only that, the new play, boldly titled Great Britain and directed by Hytner, is opening this coming Monday at the National’s Lyttelton! With no previews and tickets only going on sale now. Press and public will both see it for the first time together. “We’re ready to go,” declared Hytner at today’s press conference.

Billie Piper, previously seen at the National in The Effect for which she garnered Evening Standard and Olivier nominations for Best Actress, plays Paige Britain (who does not have red hair and is definitely not based on Rebekah Brooks), an ambitious news editor at tabloid daily The Free Press, a newspaper “locked in a never-ending battle for more readers”.

Bean and Hytner were both quick to stress that Great Britain is no docudrama, and phone hacking isn’t the only press activity examined. Nor indeed is the media the only institution in Bean’s crosshairs. It’s the triad of Ps – press, police and politicians – that Bean is concerned with and none of them “come out of it well”.

“I wanted to write this play was to show that those three institutions are essentially in bed with each other and this threatens democracy.”

“One of the reasons I wanted to write this play was to show that those three institutions are essentially in bed with each other and this threatens democracy,” Bean said. An incident that particularly fuelled him was the arrest and vilification of former Bristol landlord Christopher Jefferies, who was suspected but later proved innocent of the 2010 murder of Joanna Yeates. Jefferies’ ordeal has also inspired Peter Morgan’s two-part TV dramatisation The Lost Honour.

“I can only write plays if I get angry about something,” said Bean, and what happened to Christopher Jefferies “made me insanely furious.”

It’s incredible that, unlike so many government inquiries, so little about Great Britain has leaked out before now. Bean first approached Hytner after their success with One Man, Two Guvnors, which premiered at the National in 2011. And, Hytner pointed out cheekily, “we announced in January that there would be a new play Richard Bean in the summer”.

Maybe arts journalists and industry pundits (myself included) were slightly distracted by Bean’s involvement in the forthcoming West End screen-to-stage musical adaptation of Made in Dagenham, for which he was front and centre at another press conference, at the Playhouse Theatre, only last Tuesday… How could he have so much time, and so much range, to tackle both at the same time?!

Well, he has. The play is currently on its 29th draft, and the cast – which also includes Dermot Crowley as The Free Press’ Irish owner, Rupert Vansittart as a Tory PM and Oliver Chris (also in One Man, Two Guvnors) as a policeman – have been in workshops and rehearsals for weeks. What’s more, Hytner enlisted the help of various journalists and editors, who sat in on some rehearsals. (He declined to say who, but it’ll be fun guessing until they out themselves.)

The timing was put off slightly by what was unfolding at the Old Bailey. “We didn’t think the trial would last as long as it did,” Hytner said.

Though Great Britain is fictional, “it would be silly to suggest that there aren’t parallels with current events.” So following legal advice, the National waited to announce and open until after the trial, which pushed their schedule back by a fortnight – the play was originally due to premiere last Monday.

“We’re not stupid people,” said Bean. “So, of course, we’ve had lawyers read it and they thought it was very funny.”

Now we’ll just have to wait and see if critics – and the rest of the press – are laughing too. Luckily, we haven’t got long to wait.

Tickets for the first two weeks of Great Britain performances until 12 July are now on sale. The rest of the run, from 14 July to 23 August, goes on public sale on 26 June.

Updated Aug 2014: Following its run at the National, Great Britain transfers to the West End’s Theatre Royal Haymarket, with Lucy Punch taking over from Billie Piper as Paige Britain, running from 9 September 2014 to 10 January 2015.