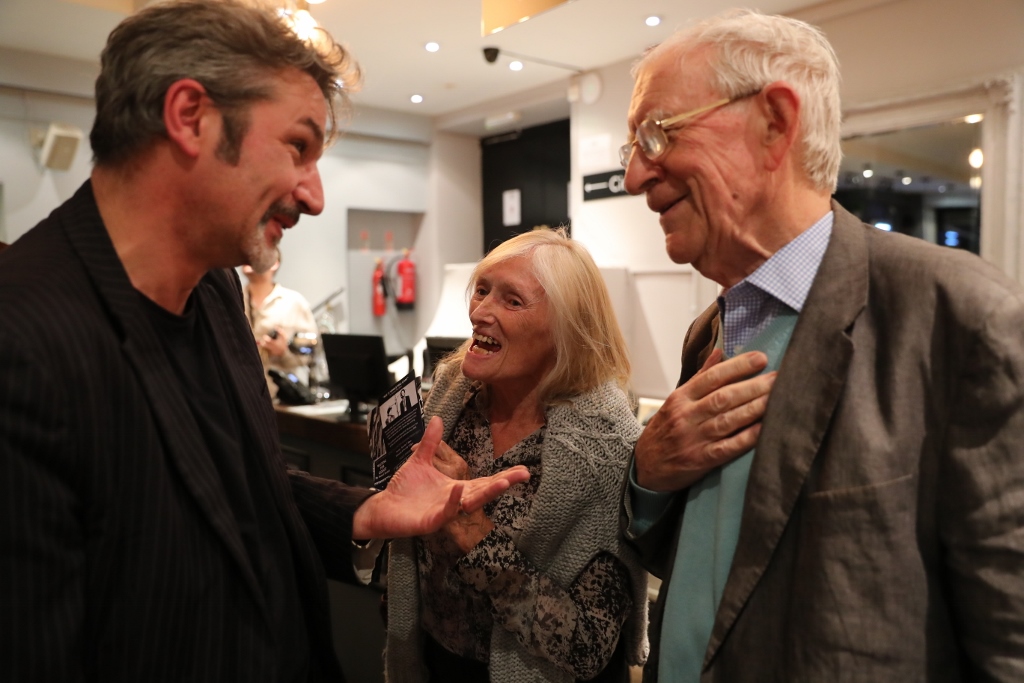 Waiting for Godot director Peter Reid with the Ridley, who saw the original 1955 production at the Arts Theatre

I had my own Godotesque moment to start last night’s Waiting for Godot Q&A. The stage was bare. Where were the chairs? Was anyone bringing chairs? How long would we be waiting for chairs? Did such things as chairs exist? In the end, five chairs did materialise – just enough for the show’s director and four stars. I ended up sitting on the, very low, prop rock.

As my dignified position in the photos testify.

And the video. Just my luck. We properly Facebooked Live one of my post-show Q&As and it’s the one where I’m sliding off a rock. Personally, I think Samuel Beckett would have approved.

“Nothing to be done”

But seriously – well, semi-seriously, because as the company kept reminding us, Waiting for Godot is also meant to be a comedy and it doesn’t mean anything anyway – what an honour to chair a post-show Q&A for this play at this address.

Beckett’s Waiting for Godot, voted the most significant play of the 20th century, has returned home to London’s Arts Theatre, where it received its English-language premiere just over 62 years ago on 5 August 1955, directed by a 24-year-old Peter Hall (video fact check: yes, he was 24 not 29), long before he ran the National Theatre or the Royal Shakespeare Company and long long before he became a Sir.

After touring it extensively internationally, Dublin-based AC Theatre have brought their acclaimed productions Beckett’s masterpiece back to this stage with an all-Irish cast. Last night, I was joined by the four stars – Patrick O’Donnell (who plays Estragon), Nick Devlin (Vladimir), Paul Kealyn (Pozzo) and Paul Elliot (Lucky – hilarious on the challenges of Lucky’s soliloquy, something to do with Raiders of the Lost Ark?!) – as well as director and Beckett expert Peter Reid for last night’s Q&A.

Waiting for Godot continues at the Arts Theatre until 23 September 2017.