Friends forever? What can I say about Matthew Perry’s The End of Longing?

Home-Friends forever? What can I say about Matthew Perry’s The End of Longing?

Friends forever? What can I say about Matthew Perry’s The End of Longing? 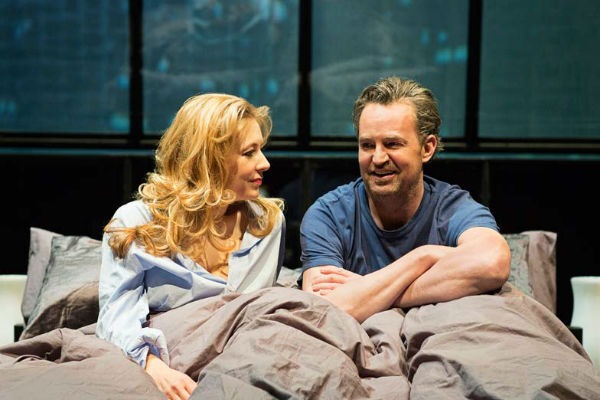 Jennifer Mudge and Matthew Perry in The End of Longing. © Helen Maybanks

Near the end of an interview Matthew Perry gave with The Times last weekend, the interviewer Sarfraz Manzoor commented “having made so many people so happy it feels only right to wish some happiness for him”.

That’s the same feeling I carried with me into the Playhouse when I saw The End of Longing a few days ago, and one that was shared by most of the rest of the audience. The genuine warmth – the cheers and wild applause at the end – directed at the play’s author and star was real and palpable.

We of the Friends generation recognise that Matthew’s experience of fame (including years of addiction to alcohol and painkillers) has left him battered and bruised. But not beaten, as this play – which he says, poured out of him in ten days – is testament to, despite the pouring of blood (his own) on the stage.

Perry has said in many interviews that the play is not autobiographical. In the strictest sense of the word, we assume no, but the character of Jack is a raging alcoholic and his struggle is clearly informed by Perry’s own. Whatever he says, we the audience know and appreciate that.

So, when we came to the scene near the end of the play, in which his character stands up at Alcoholics Anonymous to make his “I’m an alcoholic”, the audience were primed to empathise. He pleads for help: “I’m nothing,” he says, “and I need to be something.” There were tears and cheers. A few minutes later (and this was a first for me), the ushers, unprompted, were directing every exiting theatregoer to the stage door (“in case you want to give Matthew a hug”, they may as well have added).

I do want Matthew Perry to find peace and happiness so it pains me to write this next bit: based on his performance here, he should stop acting. The years since he left Friends have taken a very serious physical toll – I don’t mean this in the sense that he now appears middle-aged (don’t we all of the Friends generation? we are middle-aged now, after all) and a little overweight (ditto that for me), but his speech has become slurred and stumbling, his reactions sluggish, his performance stilted and self-conscious. This is not the quickfire actor from Friends, his many other screen performances or his last West End appearance (Sexual Perversity in Chicago in 2003, also directed by Lindsay Posner).

(A friend who knows more about such things than I do says these can be the consequences of long-term substance abuse. I don’t know, but it’s disturbing to witness, particularly with such a much-loved figure, and it hampers his acting ability.)

At the same time, however, he should keep writing for theatre. The End of Longing is clearly modeled on Sexual Perversity in Chicago – a four-hander about two sets of friends who meet in a bar, couple, de-couple and generally struggle with intimacy. It’s Mamet meets Friends. Darker (with far more expletives) than the latter, happier and more redemptive (ultimately) than the former.

This particular script needs more shaping and sharpening (Sarah Stern is credited as dramaturg in the programme, though the extent of her involvement in unclear), but Perry has got talent, and especially an ear for dialogue, that should be nurtured. He writes with humour and heart and hope. I hope he continues.

Matthew in the media

There’s been a ton of coverage around The End of Longing and other Matthew Perry-related news (no, he didn’t attend the Friends’ reunion this month; yes, he is selling his London flat for £7 million) over the past few weeks. Here are clips links to a few of the better interviews, including Sarfraz Manzoor’s in The Times.

The transformation of Matthew Perry
Sarfraz Manzoor: At the height of his Friends fame he was addicted to painkillers and alcohol. Now Matthew Perry is in bed by 10pm (for all the right reasons) In the summer of 1994, Matthew Perry was taken…

My play is a long way from Chandler
Matthew Perry today said he is finally escaping the shadow of his Friends character Chandler Bing as he brings his first self-penned play to the West End. More than a decade…

The one where Chandler writes a play
Matthew Perry will make his playwriting debut when The End of Longing opens in London’s West End on Tuesday night. Described as “a hilarious and dark comedy about four people searching…

Our starstruck Friend
Friends star Matthew Perry is starring in London’s West End in the play The End of Longing, which marks the premiere of the actor’s playwriting debut. Perry was a favourite “friend”,…

Audiences ‘laughing and crying’ at Perry play
Matthew Perry has told ITV News the audiences at his debut play in the West End have laughed and cried saying they are doing “all the things we want them to be doing”. He also warned…