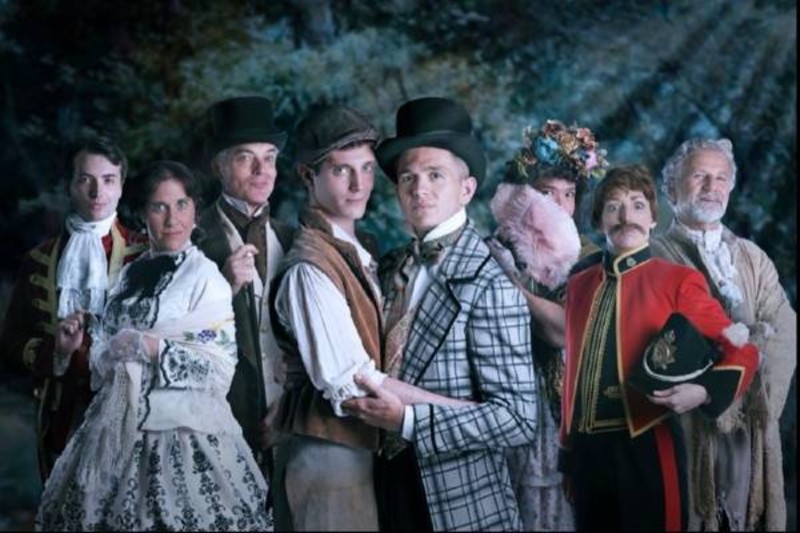 Wildly funny new musical The Pleasure Garden takes a peek through the bushes to discover the bawdy history of Vauxhall’s history as a hedonistic playground. It premieres at Vauxhall’s own Above the Stag Theatre, on the edge of the park where the story is set.

For two centuries, the Vauxhall Pleasure Gardens in south London drew enormous crowds for its circus acts, balloon rides, orchestral concerts and spectacular fireworks. For those in the know, however, the darker paths, wooded corners and intimate arbours were used for more illicit and illegal entertainments.

In The Pleasure Garden, it’s 1850 and the gardens are now in their dying days. Yet still the faithful come…

Tom Restless, a handsome young gardener, is torn between the affections of a hopelessly romantic shipping clerk and a sexually voracious aristocratic couple. With the gardens closing and his livelihood under threat, will Tom choose a bohemian life with Ralph; employment with the unorthodox Lord and Lady Lovelock; or answer the drumbeat of a looming overseas war?

The Pleasure Garden is written by Glenn Chandler, whose many hit award-winning plays include, most recently, Kids Play and The Good Scout, for which I also chaired post-show talks for their London runs at Above the Stag. It has music by Charles Miller, direction by Fenton Gray, musical direction by Aaron Clingham, choreography by Carole Todd, design by David Shields and lighting by Jack Wills.

Following the 7.30pm performance on Wednesday 29 September 2021, I’ll talk to The Pleasure Garden company about the show and the local history they have discovered. Any questions? Join us!