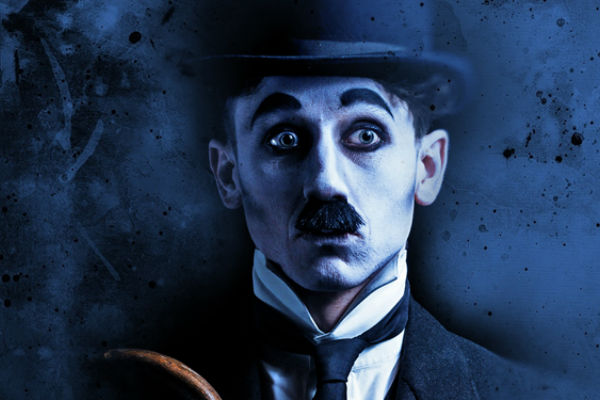 After my post-show talk to Jekyll & Hyde in September, I’m delighted to return to Brockley Jack Theatre for Chaplin, another Arrows & Traps production – and more exciting still, a brand-new play, written and directed by artistic director Ross McGregor.

For over 100 years, Charlie Chaplin has been the world’s best-loved clown.  His brilliant comic creation of “The Little Tramp” is the first and most recognisable cinematic icon in history. But his remarkable story of stardom and success has a darker side.

Raised in the horrific, grinding poverty of a Victorian slum, Charlie never knew the security of a stable family.  Whilst his parents destroyed themselves with disastrous ambition and unshakeable vice, Charlie was thrown at the mercy of the workhouse. Desperate to escape his feral existence on the streets of South London, Charlie became captivated by the shining lights of vaudeville, and gradually began to see a way out.

Arrows & Traps return to Brockley Jack with the premiere of Chaplin, an examination of the relationship between experience and creativity. You’re invited to discover how Charlie Chaplin spun personal tragedy into universal comedy, in a psychological exploration of one of the world’s most remarkable lives.

After the 7.30pm of Chaplin on Friday 7 February 2020, I’ll be joined by the play’s writer and director Ross McGregor and members of the Arrows & Traps cast. Any questions? Join us!