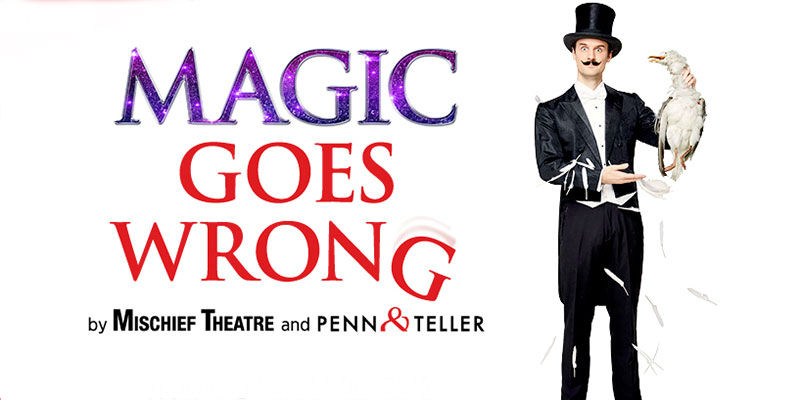 In the latest of a monthly series of Mischief Theatre post-show talks in the West End, I’ll return to the Vaudeville Theatre, where, following Groan Ups, the company’s year-long season of new work continues with a brand-new ‘goes wrong’ comedy.

Created with magic legends Penn & Teller, Mischief Theatre conjure up an evening of grand illusion in Magic Goes Wrong. In the next ‘Goes Wrong’ comedy to hit the West End, the original Mischief company play a hapless gang of magicians presenting a charity event. As the accidents spiral out of control, so does their fundraising target!

The new comedy is written by Mischief’s Jonathan Sayer, Henry Lewis and Henry Shields with Penn & Teller, directed by Adam Meggido, with set design by Will Bowen, costumes by Roberto Surace, lighting by David Howe and sound by Paul Groothuis, music by Steve Brown, movement by Ali James, video and projection by Duncan McLean, with Ben Hart as magic consultant and Hannay Sharkey as associate director.

After the 7.30pm performance of Magic Goes Wrong on Thursday 23 January 2020, I’ll be joined by Mischief Theatre creatives and cast members. Any questions? Join us!