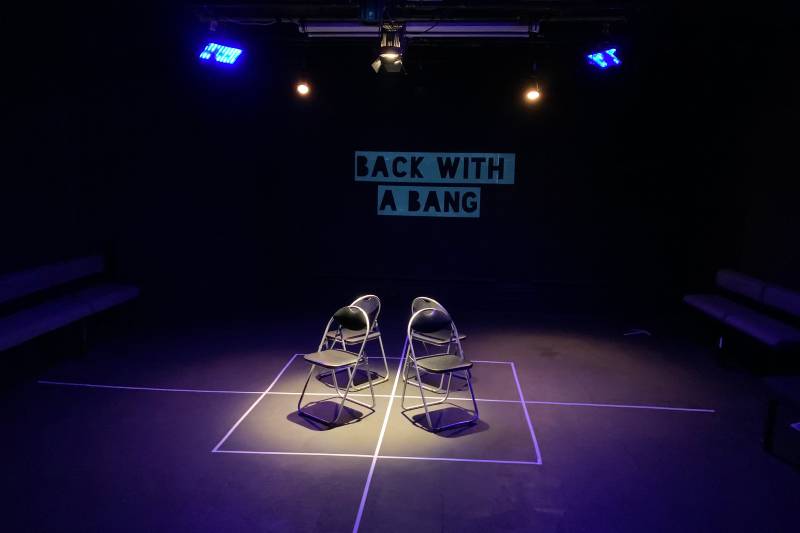 After fascinating discussions around Feel, At Last and Lately, I’m back with Proforca Theatre to discuss Flashbang, the company’s fifth new play by James Lewis, as well as exciting new work by associate artists also programmed during the autumn season at the Lion & Unicorn Theatre.

1. a grenade that produces a bright flash and a loud noise so as to stun or disorient people without causing serious injury; a stun grenade.

Ryan and his gang were going to be mates forever.
Living their lives in the same cycle as everyone else in a little town 20 miles from anywhere that mattered.
Living for the next night out. Living for the weekend. Getting into and out of trouble. Work. Pub. Sleep. Repeat.

Ryan and his gang have seen it all, done it all, lived it all. The nights they wished they could remember and the mornings after they’d rather forget.
Ryan and his gang were going to be mates forever.
But then came the night when everything changed.

Proforça Theatre Company returns with Flashbang – an exuberant, explosive and gut-punching rollercoaster ride through the ties that bind best mates together, a world that revolves around a town where nothing ever happens, and what happens to those friends when that world gets blown apart.

Following the 7.30pm press night performance on Thursday 8 September 2022, I’ll chair a discussion with the Flashbang company about the latest Proforca premiere, followed by a celebration of other upcoming work by Lion & Unicorn associate artists.