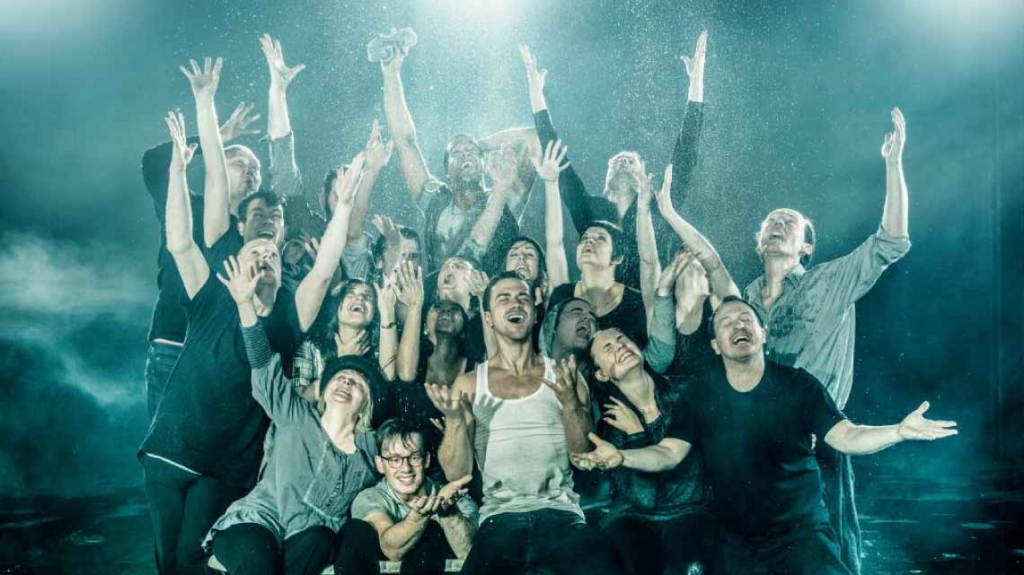 The cast of Urinetown also had blood rain down on them

David Curl, company manager of Urinetown at St James Theatre, recalls the challenges of working with so much stage blood. The show is now aiming for a West End transfer, venue still to be announced.

I first had to use a large amount of blood onstage in a tour of Matthew Bourne’s Highland Fling in 2005. There were quite a few brands of blood available, but the recommended one was a brand called Nick Dudman Blood made by a company called Pigs Might Fly. It’s extremely realistic being very dark and with a rather thick consistency so has a very dramatic effect when it’s used. As nearly all the costumes were white and got covered in it, we had to be sure that the blood would wash out. This brand is sugar based and did just that. It is, however, one of the most expensive brands (retailing at £55.95 a litre).

Eight years later for Urinetown we discovered that director Jamie Lloyd (@lloydjamie) wanted to add a spectacular blood-letting sequence into the climax of the show where all the characters are clearly ‘covered’ in blood. I spoke with a friend who had been doing make up on Game of Thrones to see if there was a current recommended brand and she told me that – for what we needed – it had to be Nick Dudman Blood.

Every show, we had to make up 18 small blood bags that cast members carried in their pockets and then squeezed into splitting in their hands at the appropriate moment and one large blood bag that a cast member had in his shirt pocket where it was ‘stabbed’ by another actor. All the bags were made from filling and knotting sheets of cling film and a show’s worth took over an hour to prepare. We got through about a litre of blood every two shows.

The actors had to be extremely careful about where their hands were when they squeezed the bags as the blood would find the tiniest of cracks in their fist and shoot out at an incredible speed. A couple of times, we did manage to hit a punter but luckily never too badly, and they were always assured that it would wash out and we would meet any dry cleaning bill they might care to send in – they never did!

At the end of the show all the cast had to wash quite a bit of blood off themselves and usually around seven or eight of them had to have full showers as they were soaked in it. The St James Theatre is very small backstage and has white walls. At the end of each night, after everyone else had left and I was closing up after finishing the show report, a walk through the dressing room corridor and checking the showers looked like the scene from Psycho with blood smeared on walls, doors, handles, floors. Goodness knows what the cleaners thought when they came in the morning after the first preview! 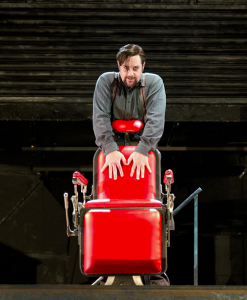 Sweeney Todd, 2012: Michael Ball’s barber’s chair got even redder after a close shave

Also at the end of the show, the stage management and crew had the laborious job of washing down the set. The blood had to be removed that night because, being sugar based, it would became very thick and hard to lift off. This involved washing down the full stage floor on two levels, four sets of ladders and treads plus numerous props such as mops and buckets, briefcases, torches, truncheons plus a white taxidermy rabbit that would all get stained with blood.

The worst thing would be that you would often get a smear or two on yourself whilst cleaning and not realise. On more than one occasion I would get odd looks from other people on the Tube as I was going home and quickly realised that, if it wasn’t the whopping great patch of blood down my jeans or the fact that my hands were bloodied like a butcher’s apprentice, then I probably had a big smear of it on my face or neck!

Urinetown was a great production to do and the blood was spectacular, but let’s just say I’ll not be rushing to send my CV in for the next revival of Sweeney Todd anytime soon!