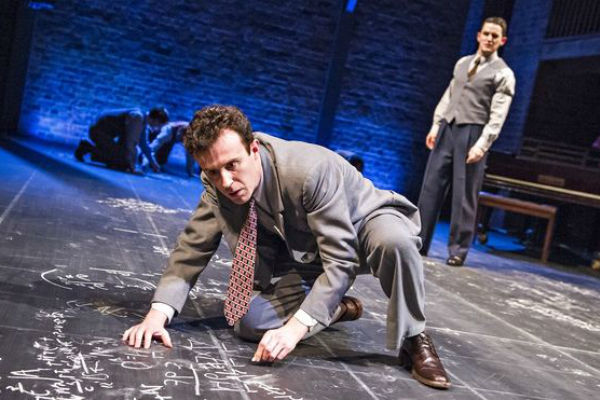 Several weeks after the West End press night, I’m still thinking about Oppenheimer, which, after its premiere in Stratford-upon-Avon, the Royal Shakespeare Company has transferred to the Vaudeville Theatre for a limited West End season (thank you, RSC).

I blogged separately about Tom Morton-Smith’s incredibly ambitious play in an earlier #TheatreDiary, but I wanted to come back to one particular scene in it – and titular star John Heffernan’s masterful handling of an opening night mishap.

As I tweeted at the time, there was some sort of technical fault at the Vaudeville on the London press night. During the closing moments of the play, it sounded as if a speaker somewhere was about to explode. A buzzing that started off softly grew and grew in volume, until it became an almost deafening, malevolent crackle.

Kudos too to JohnHeffernan for acting thru electrical buzz disturbance (a speaker about to blow?) during final speech pic.twitter.com/y0RrnY2clT

To his immense credit, Heffernan didn’t stop or bat an eyelash, he simply carried on. What a pro. And, after all, RSC actors know how to project. But even when practically shouting, it was difficult to make out many of Heffernan’s words – and I was in row G of the stalls, so I imagine those further back really struggled.

Luckily, the helpful RSC press office sent me the Oppenheimer script the next day. So I could at least read what I missed. In case you also missed out on the night – or are unlucky enough not to have a chance to see Oppenheimer at all – I wanted to share it with you too.

The title of the scene is “The Destroyer of Worlds”. It takes place after the dropping of the bombs on Hiroshima and Nagasaki conclusively ended the Second World War. Oppenheimer is ruminating on his bloody legacy and wondering where he and his wife go from here. When she suggests they return to Los Alamos, this is his astonishing response:

There is no science left in building bombs. The world knows my name … and it knows what I have done. A skinny … intellectual … elitist … New York Jew with chest problems and sciatica … ended the war.

I saved many lives … American lives. Is a soldier comparable to a civilian … of any nationality? A child … a baby … a pregnant mother … a conscientious objector … an old man at the end of his days …?

This was so much philosophy … now it is my cold sweat. (beat)

I want to wallow in the adulation … the respect. I want to walk down the street with everyone knowing who I am. I want younger men to stumble as they talk to me. I want university boards to trip over themselves to offer me positions and awards. I want pretty young girls at trendy socialite parties to ask me questions on deep physics and hang to my every word. I want to seem effortless. I want some upstart to question my methodology only so that I may crush them with a withering reply.

I accept on my soul … on my back … I accept the weight of those Japanese … if I have brought atomic power to the world … if I have nullified war … then I welcome it all.

But … no … instead … instead I feel like I’ve left a loaded gun in a playground. (beat)

I must remember what those boys said as they painted me green … because they were right about one thing … I am not a man. A man would buckle under this weight. I am something more. I am lead-lined. I am tungsten.

There’s a passage in the Hindu scripture … the Bhagavad-Gita … it came to my mind at the Trinity test … in order to persuade the prince to do his duty, Vishnu takes on his multi-armed form and says: “Now I am become Death, the destroyer of worlds.” 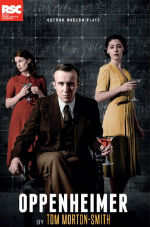 Reprinted with the kind permission of the RSC.

The full playtext of Tom Morton-Smith’s Oppenheimer is published by Oberon Books (priced £9.99). Visit the publisher’s website at www.oberonbooks.com.

The RSC production of Oppenheimer, directed by Angus Jackson and starring John Heffernan, continues at the West End’s Vaudeville Theatre until 23 May 2015.