Writing a blog in the form of the letter (as I did with my Conversation with Caitlin Moran series) about the stage adaptation of the 2012 book Dear Lupin allows me to both use the word epistolary (my favourite word of the week) and to demonstrate its very definition, which is: “relating to the writing of letters” or, when related specifically to a literary work, one that is in the actual form of letters.

The book was just that: Charlie Mortimer published his collection of letters written to him over the course of 25 (unruly, misspent youth) years by his late father, the former racing correspondent of the Times, Roger Mortimer, who died in 1991. 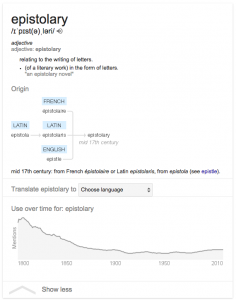 The stage two-hander is nearly that but with added theatrical oomph, as adapted by actor-memoirist Michael Simkins. Here, the letters aren’t just drily read, but rather relived while also topped, tailed and interspersed with narration by ‘Charlie’. As a result, we’re able to hear not just Roger’s warmth and wisdom but also Charlie’s voice – and to learn of his personal challenges (addiction, HIV and the rest) and his reciprocal love for his father.

It’s gentle, nostalgic and touching entertainment – and immeasurably and genuinely enhanced in Philip Franks‘ production, now transferred to the West End after a regional tour, for being performed by real-life father-and-son actors James and Jack Fox. Their hug at the curtain call was heart-warming.

Ah, and a note on the title: Lupin was name of fictional Charles Pooter’s wayward son in the quintessentially English 1892 comic novel The Diary of a Nobody (coincidentally, also seen this year on the London stage – a great preface to seeing Dear Lupin)

While I can’t share excerpts from Roger Mortimer’s own beautifully written letters (I think we’ll both need to order a copy of the book to savour those), I can share a few excerpts from the play programme that added to my appreciation of the making of Dear Lupin.

Charlie Mortimer answering: What do you think your dad would have made of it all?

“There’s a bit that Michael’s put in [the play], and it was  areal quote from my dad. Because he was very funny and witty on the page and off, lots of his friends and myself said: ‘Come on, Dad, write an autobiography – it would be hysterical.’ The response would always be the same: ‘Look, sonny, I’ve only got about four friends left and I’d rather hang on to them, if you don’t mind.’ I think he was genuinely modest and all these letters were written for an audience of one. I don’t think in his wildest dreams he’d have thought something like this would happen. I guess my mother would be more thrilled than my father. The fact that she is now remembered as some slightly Dickensian character with a wig on, clutching a bottle of Beefeater and a chihuahua, is neither here nor there.”

Michael Simkins answering: The book is primarily from the perspective of Roger, Lupin’s father. Did that present a challenge in adapting it?

“In the book, the letters are those of Roger, this much-beloved and wonderful and exasperated father of Lupin. Lupin – Charlie – deliberately keeps his comments to a minimum. They are there to set off the jewels of these letters, rather than to provide a heavyweight counterpoint to them. They’re not intended to be anything more than just a sketch to set the letters in a setting whereby people can really relish them. But I wanted the play to be a story about a father and son, and that sense of love and exasperation of the son adoring his father but also needing to break the mould, to rebel. What I needed to do was to try and make it a proper play for two people. I need to create a dynamic between father and son.”

Philip Franks answering: What is it about the letters that makes them son endearing?

“We’ve all got a dad. I think, despite its period and its class settings, it manages to transcend that and say something universal about parents and children in a very British way. If this was written by an American, it would probably be set at Christmas and there would be tears in the first act and blood in the second, but because it is cast so exquisitely in a British milieu, it means that everything is done with a gentle humour – which is not to say that it can’t be heartbreaking.”

Dear reader, Dear Lupin is running at the West End’s Apollo Theatre until 19 September 2015. I warmly recommend it to you and your loved ones.