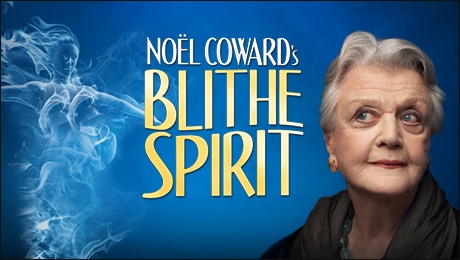 Angela Lansbury conjures up a hit

You only have three more weeks to catch Blithe Spirit at the Gielgud Theatre. Michael Blakemore’s production – and, more specifically, Angela Lansbury’s performance in it as dotty clairvoyant Madame Arcati – is undoubtedly one of the theatre events of the year.

The “eventfulness” of the occasion has little to do with the play. The 1941 comic confection is one of Coward’s most performed. Even casting big in the comparatively small role of Arcati is de rigueur. From Margaret Rutherford, who originated the role on stage and screen, to – in just the past few years in the West End – Penelope Keith (at the Savoy in 2004) and Alison Steadman (at the Apollo in 2011), the part has attracted a roll call of distinguished actresses. 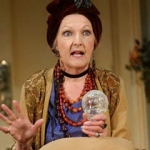 Penelope Keith was Arcati in 2004

But 88-year-old Angela Lansbury takes event-casting to another level. She first played the chaos-wreaking mystic – also directed by Blakemore but in a different company, including Rupert Everett as Charles – on Broadway in 2009. This reprisal has returned Lansbury to the stage in her native London for the first time in nearly 40 years.

That’s an absence during which, amongst other accomplishments, the actress has won five Tony Awards (for Mame, Dear World, Gypsy, Sweeney Todd and, most recently, Blithe Spirit), endeared herself to the world as sleuth Jessica Fletcher in 12 years of Murder, She Wrote, racked up over a hundred film credits and won an honorary Oscar (after being nominated for the regular kind three times). 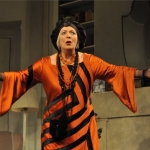 Alison Steadman was Arcati in 2011

To add to her groaning mantelpiece, during the current run, she became a newly minted Dame, popping in to Buckingham Palace to collect her DBE from the Queen. Lansbury remains a bona fide national treasure in spite of – or even because of – upping sticks to the US decades ago.

And the reverence afforded her by her middle-aged (or older) British fans is astonishing. When I caught a performance of Blithe Spirit several weeks ago, I was initially taken aback by the hoots and cheers elicited by her very appearance on stage; when she gamely danced and flapped about during her séance preparations, I feared the man next to me may spontaneously combust with mirth.

I don’t think I’ve seen reactions quite so breaking-the-fourth-wall OTT in London since Madonna came to town in Up for Grabs in 2000. At least no bouncers were required this time, though the theatre manager tells me that there’s been plenty of frenzied autograph-hunting at the stage door.

2 feathers in that cap? “RT @LeeDeanProducer: Dame Angela Lansbury w/ her DBE presented to her by Queen at Windsor pic.twitter.com/9YRSpAp8H8”

These are not teeny-boppers, remember, but incredibly well-heeled theatregoers. What were they drinking at the interval?! Alcoholic orders or not, perhaps it’s not surprising. Lansbury is, as the advertising and publicity reminds us, a “legend”, and as remarkably energetic and charismatic as she is, at 88 and with her rate of London stage appearances, you’ve got to figure this is probably your last and only chance to see her onstage.

By the way, she’s joined at the Gielgud by a superb British cast, including the always fabulous Charles Edwards and Janie Dee as husband and wife Charles and Ruth Condomine, and Jemima Rooper as the first Mrs Condomine, the mischievously ethereal Elvira.

If you haven’t yet booked to see Blithe Spirit, don’t be put off by demand hype. The show’s a hit and selling extremely well, but there are still good tickets available for most performances. And, if you’re on a budget, you can always try your luck for the £10 day seats, released at the box office each morning at 10am. The countdown is on. Three weeks and counting…tick … tick… tick.

Not that Blithe Spirit is the only Coward in town, or the only event-casting Coward. The Master’s much less-frequently revived 1951 comedy Relative Values opened at the West End’s Harold Pinter Theatre a few weeks after Blithe Spirit, via Theatre Royal Bath and a regional tour. It has a pretty top-drawer cast of its own, including Patricia Hodge, Caroline Quentin (two future Arcatis, surely?), Rory Bremner and Leigh Zimmerman.

Critics weren’t quite so unanimously enraptured by this production as by Blithe Spirit – Time Out’s critic Andrzej Lukowski was so bored by the “drearily predictable” plot that he wished director Trevor Nunn had just “cut the crap and revived one of the five plays by Noël that people still like”. (Because, goodness knows, we just don’t have enough revivals of Hay Fever, Private Lives, Design for Living, Present Laughter and, indeed, Blithe Spirit.)

I was out of the country and missed the opening of Relative Values and now I’m rather glad. Not because I’m turned off by Andrzej’s review, but because I’m more turned on by the recently announced replacement casting and would like to see it fresh. From 26 May (just after I return to London), Neil Morrissey will take over from Rory Bremner, playing the family butler. That’s opposite Caroline Quentin as the chief maid, Moxie…. 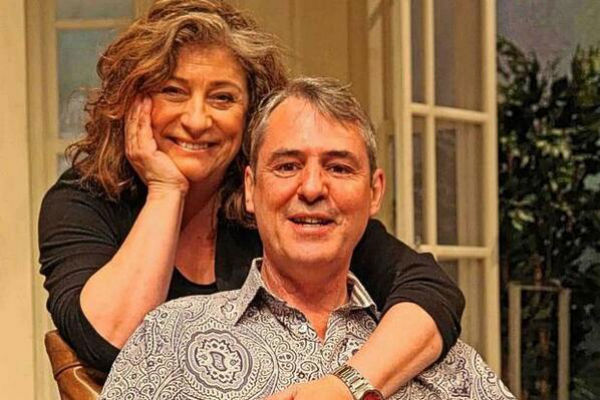 For me personally, this is almost more of an event than Angela Lansbury. Dorothy and Tony from Men Behaving Badly reunited onstage? Brilliant! Men Behaving Badly was must-watch television for my skint friends and me in the 1990s, and this casting takes me right back to my first years living in London in my early twenties.

I can’t wait to see Morrissey and Quentin together again. If only we could engineer some cameos for Gary and Deborah too…. I’ll be amazed if Martin Clunes and Leslie Ash don’t at least make an appearance at the press performance.

Meanwhile, English Touring Theatre are creating another kind of historic Coward event with Tonight at 8.30. It’s a “nonology”, according to my Twitter friend Kris Buddle; a.k.a. a cycle of nine one-act Coward plays, and all nine are being performed together for the first time in the UK since Coward himself starred in them in 1936. 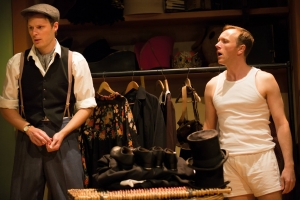 The nine plays – which the ETT company presents in nightly triple bills under groupings of “Cocktails”, “Dinner” and “Dancing” – are: We Were Dancing, The Astonished Heart, Red Peppers, Ways and Means, Fumed Oak, Still Life (which, most famously, was later remade as the David Lean film Brief Encounter), Family Portrait, Hands Across the Sea and Shadow Play.

(In fact, when Coward performed Tonight at 8.30, there were ten plays, but Star Chamber has been quietly dropped. Maybe that one really was a stinker. The Time Out critic will be relieved.)

The ensemble that ETT has assembled is a great one – Kirsty Besterman, Amy Cudden, Daniel Crossley, Shereen Martin, Olivia Poulet, Gyuri Sarossy, Peter Singh, Orlando Wells and Rupert Young – but, apart from Coward’s, the biggest name associated with the project is probably the hot young director’s, Blanche McIntyre. (Unless you watch Merlin, in which case, you’ll undoubtedly say Rupert Young.)

Currently at the Southampton home of co-producer Nuffield Theatre until 24 May, Tonight at 8.30 tours until 26 July 2014, including a week’s stop at London’s Richmond Theatre from 11 to 14 June. I hope I can catch up with it there.