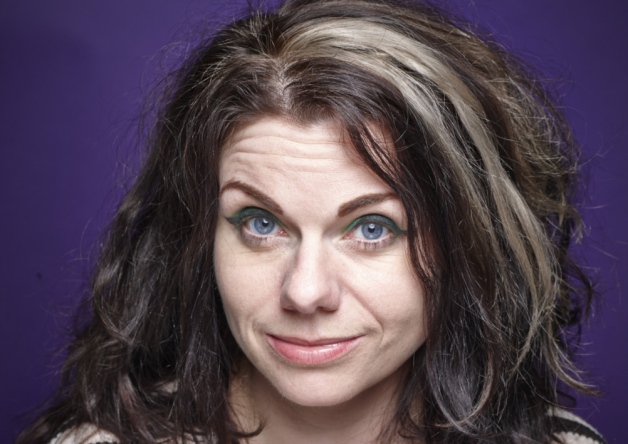 Caitlin Moran, The Times’ Columnist of the Year

In April, I set myself a month-long challenge to learn and share something useful every day. (You can read them all in my What I Learned Today series.) Now I’m getting a jump on my New Year’s blogging resolutions list with this new mini-challenge.

I’ve been a Caitlin Moran devotee since devouring How to Be a Woman three years ago. Every Saturday since, her column is the first page I turn to in the magazine of the Saturday Times.

I like to imagine that Caitlin and I would be great friends if we ever met. In my small social media way, I’ve tried to engineer it – but it’s hard to attract attention when you’re only one of more than 519,000 (her Twitter followers, that is).

So I’ll have to settle for a digital penpal-ship instead, even if it is one-sided. My new blog challenge is to write regular responses to Caitlin’s columns. Hopefully, in the process, I’ll learn a bit more too, and encourage you to read more Moran too, if you don’t already.

I enjoyed your column this week. As always, you gave me plenty to think about. Here are some of those thoughts:

1) Don’t settle for just the 12 days of Christmas.

“In ten days’ time, even the Christmas trees come down … All there is now is ordinariness, and belt-tightening, and cold, until God forgives us and lets us have spring – who knows when. Oh God, it’s depressing.”

True, if you subscribe to the 12 days of Christmas schedule, then it’s all over on twelfth night, next Sunday 5 January. However, according to the Church of England, the full Advent and Christmas season lasts 40 days, which includes the Epiphany, a kind of seasonal epilogue, which begins on 6 January and continues until Candlemas Day on 2 February.

So, we’ve still got more than a month left of the holidays. (Thanks to Stephen Fry and QI for enlightening me.) Sadly, my partner Peter forbids me from playing any more Christmas music for at least another 11 months. We may leave the fairy lights up though, which leads me to…

2) Millionaires’ lighting should be redirected to local councils.

“The lights are on in the oligarchs’ postcodes – the empty buildings blazing, like UFOs landing, on chi-chi residential streets. You would never believe there were so many places to put lights, until you saw the empty house of someone fathomlessly wealthy. Spotlighting the drive; washing the house front. White nets of fairy lights over the yew hedges; uplights on each tree. Every chandelier in every room on.”

Though I haven’t surveyed any oligarchs, I agree that this is a ridiculous waste under any circumstances, but especially when homes are unoccupied. (Fairy lights can be excused in my case, surely – hey, they’re small and festive and we’re home to enjoy them.) 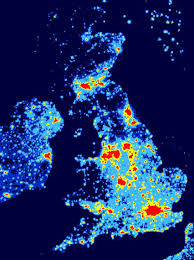 Light pollution map of the UK

I was especially struck by your observation on this phenomenon, Caitlin, having just been blogging about the appalling and ongoing cuts to local councils, which have resulted in three-quarters of councils switching off streetlights to save money.

Do you sense the same readymade solution?! Let’s get those millionaires to redirect some of their lighting (or just a fraction of their electricity bills), away from their empty manors and onto those dark and dangerous neighbourhood streets where it’s needed. The millionaires can keep motion-sensor lamps, burglar alarms and other security systems, in case they’re worried about break-ins.

“I have tried to think why you would fly away from your house, leaving every light on for months on end. How you could confidently cancel the night for all those you left behind.”

While I’m offering little sympathy for the millionaires flown south, I don’t think it’s fair for us to lay all the blame at their feet for “cancelling the night” in their absence and causing confusion and insomnia in London’s robins and wrens, Caitlin.

Have you seen the light pollution map of the UK? London is ablaze, all year round, and not just in Hampstead. In my distinctly non-millionaires’ row in SE1, I wear an eyemask to bed, even with the blinds closed and curtains drawn. There is no such thing as a truly dark room in our London flat.

4) Yet, despite all the light, many of us are SAD afflicted.

“As the winter goes on… I see that we do need, after all, the winter cold and dark. And how if you stayed here, you would value it.”

Yes, you’re right, Caitlin. There is, of course, a reason for the cold and dark of winter, not least because of how much more we appreciate the joys of spring and summer more once we’ve been through these months.

But, in spite of the millionaires’ efforts, the lack of light – or natural light – does have its consequences. I’ll put my hand up and say I notice it acutely. At this time of year, working from home is challenging. I’ve moved my computer from the office (a.k.a. the box room in the back of our flat), to the dining table in the front lounge, where there are more lights, bigger windows and better exposure. 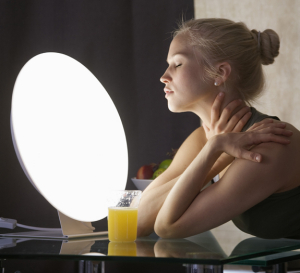 While the sun is out, I can’t bear to have the blinds closed even slightly. I’ve got to “let the day in”. Come the crepuscular hour, though, sometime between 3 and 4pm these days, I seal the room up tight because, conversely, I definitely do not want to “let the night in”.

And then there’s Seasonal Affective Disorder (SAD), a form of depression, which takes it all a step or ten further. For one in five of us, we escape with just “sub-syndromal SAD” or a case of the “winter blues”, which can be mildly debilitating. We don’t want to let the night in any more than we have to.

For 2% of the population, full-blown SAD can be seriously disabling, and reaches its zenith in December, January and February.

Maybe what we need is more lights (ssshhh, don’t tell the millionaires) – SAD sun-lamps (as opposed to tanning sun lamps), that is. I understand that they can be highly effective in fooling your brain and warding off the winter blues. Unfortunately, they’re not available on the NHS. And I’m afraid, non-millionaire London flats like mine being the microscopic size that they are, I haven’t got anywhere to store one anyway.

Luckily, Candlemas and spring are just around the corner.

‘The millionaires are gone south without us. And they leave their mansions with the lights on’.

Here we are in the middle of the winter – cold, dark. In ten days’ even the Christmas trees come down…