Cheerleaders get a bad rap: Vanities and four other musicals with pep

Home-Cheerleaders get a bad rap: Vanities and four other musicals with pep

Cheerleaders get a bad rap: Vanities and four other musicals with pep 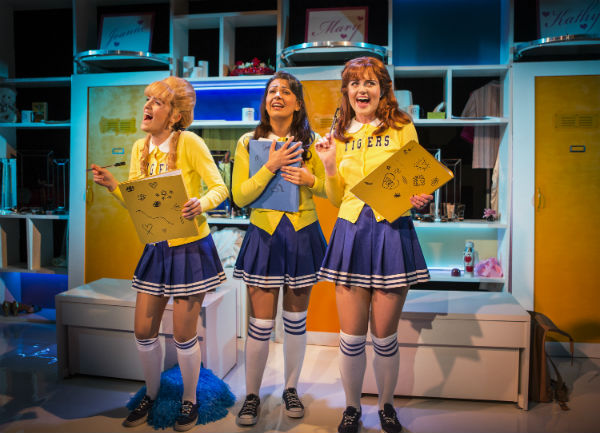 Cheerleaders generally get a bad rap. When I went back to the States for my twenty-year high school reunion a few years ago, I witnessed first hand just how bad that rap can be.

There was a prominent cheerleader in my high school: let’s call her Stacey. I didn’t know her well growing up. I most definitely wasn’t a cheerleader myself and our cliques didn’t overlap. Stacey was popular with a capital P, and I recall her being pretty stuck up.

Fast-forward 20 years and Stacey and I were thrown together on a sofa at a reunion party. From where I was sitting, popularity didn’t seem important anymore. In the 21st century, I struggled to maintain a conversation with Stacey not because she was stuck up but because we didn’t have much in common and – to be honest – I found her a little dull.

“We were cheerleaders and sorority girls. We’ve run the gamut.”

Then another classmate approached. This woman had obviously spent some time gathering her nerve. She stormed up to Stacey, got right in her face and shouted: “You’re Stacey X, the cheerleader, right? You were a bitch in high school and you’re a bitch now. You ruined my life and I still hate you.” Then she stormed off again.

I didn’t know who to feel sorrier for: the angry woman nursing this animosity for two decades, or Stacey for being confronted, in a humiliating manner, with such a charge. Had she really done anything quite so awful in high school? How could she live with herself if she had? But what could a spoilt teenaged girl have done that was so heinous a person would carry it with them for twenty years? 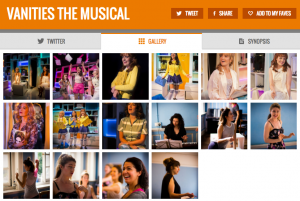 Get all social media (+ photos) for VANITIES & its cast on www.stagefaves.com

Anyway, watching Vanities The Musical tonight brought this episode back to me. Lauren Samuels, Ashleigh Gray and (very very funny, heavily drawling) Lizzy Connolly are three cheerleaders who cling to or abandon – with varying degrees of intensity – their high school popularity as life throws what it will at them over 20+ years. All three actresses beautifully chart the women’s progress from the youthful frivolity of Act One through to the jaded disappointments and bittersweet reconciliations of Act Two.

I identified with each of these three flawed female characters – Joanne, Kathy and Mary – at different points. And I absolutely identified with the joys and pangs of the friendship they shared.

As soon as I left Trafalgar Studios, I rang one of my best friends who I haven’t spoken to in months. The drift is relentless in our busy lives – and Rebecca is a London friend, a few short stops away on the Tube, no excuse. I’ll also be contacting my best friends from high school and college this weekend. I’ve been blessed with some wonderful female friendships – Vanities is a reminder to recognise and cheer those friendships. 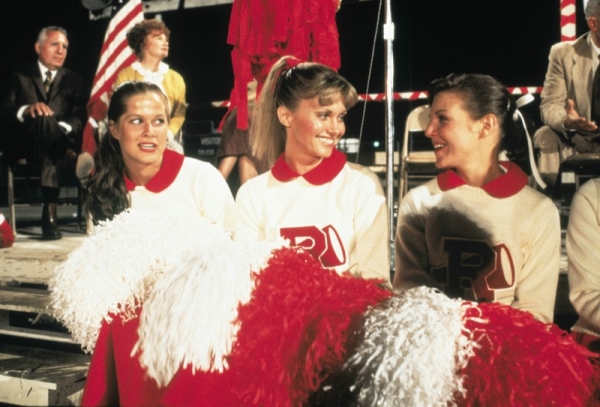 Olivia Newton-John in the 1978 film of Grease

And speaking of cheering, I’ve been racking my brains trying to think of other all-American musicals featuring cheerleaders. Here’s a shortlist but I’m sure there are many others. Can you help?

Grease – Of course. The 1971 stage original was made into the seminal 1978 film, starring Olivia Newton-John as goody-two-shoes, would be cheerleader Sandy and John Travolta as her greaser boyfriend Danny.

Bring It On – Loosely based on the 2000 film starring Kirsten Dunst about a cheerleading competition. The 2012 Broadway musical has music and lyrics by a team including Lin-Manuel Miranda. Maybe we’ll get a transfer on the back of London successes with In the Heights and forthcoming Hamilton?

Peggy Sue Got Married – Ruthie Henshall starred in the 2001 West End musical adaptation of the 1986 film that starred Kathleen Turner. In a joyless marriage with her high school boyfriend, middle-aged Peggy returns to her hometown for a reunion and is thrown into a timewarp to become her high school (cheerleading) self again. The musical opened days before 9/11 and, hit hard by the subsequent tourist downturn, closed after a few weeks. Time for a revival? Maybe at the Union Theatre? It’s very Groundhog Day-esque and has music by Bob Gaudio from the Four Seasons.

But I’m a Cheerleader – I haven’t seen this one but heard good things about a showcase it had in London a few years ago, helmed by Jerry Mitchell and starring Hannah Waddingham. The musical, featured at the New York Musical Theatre Festival in 2005, is adapted from the 1999 cult film comedy about popular (of course) cheerleader Megan, whose family suspect she may be a lesbian and stage an intervention and rehabilitation. Exploratory Reading. A musical adaptation of the cult 1999 Lionsgate Motion Picture.