Blood Wedding Q&A and podcast: What happens when you relocate Lorca to modern London?

Home-Blood Wedding Q&A and podcast: What happens when you relocate Lorca to modern London?

Blood Wedding Q&A and podcast: What happens when you relocate Lorca to modern London? 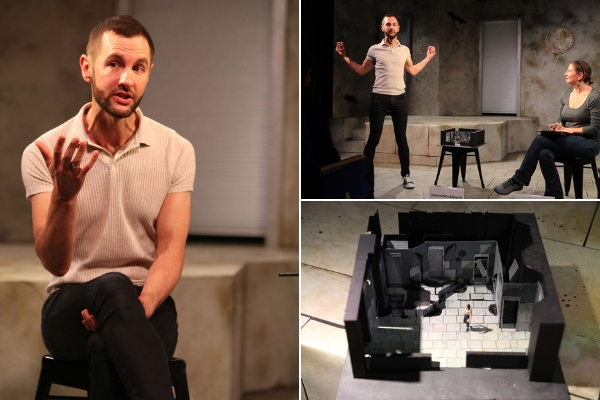 What a reminder that live theatre is LIVE, that things can go wrong and that that’s all part of the excitement.

At the Omnibus Theatre last night, Blood Wedding‘s 7.30pm start time was delayed as one of the actors was trapped on a broken down overground train. I was already there to chair a post-show Q&A with adapter/director George Richmond-Scott so we decided to make it a pre-show Q&A.

This turned into a fascinating, impromptu interview with George – carefully avoiding spoilers – about how his (and the highly engaged audience’s) love of Lorca, how this new version came about, the key role that Google Translate played in the adaptation, the importance of a full-time movement director, the rise of fascism, the intricacy of set models, Everybody’s Talking About Jamie (yes, the West End musical – George is also associate director on it) … and much more.

After an hour’s discussion, the actor’s train still hadn’t moved and the performance had to be cancelled – much to the disappointment of the audience, who, seemed like they could have gone on talking for another hour to buy more time! Happily, all the theatregoers who were available to have been rebooked for another performance. What’s certain is that they’ll now be watching Blood Wedding with far greater insight now. Listen to the full, unedited podcast of the discussion below.

I hope this evening’s “Lorca lesson” has also energised them to join me for the Cervantes Theatre’s production of Yerma, Lorca’s next play in his renowned 1930s Spanish rural trilogy. That event is on Friday 9 November.

Meanwhile, back at the Omnibus, Blood Wedding has been winning rave reviews and continues until 23 September. George Richmond-Scott has relocated the action from rural Spain in the 1930s to cosmopolitan London today, where a bride’s wedding is disrupted by an ex-lover. What happens when it’s too late to escape – will she open the door and run? A play for our fractured times, this new version of Lorca’s 1932 classic also explores cultural divisions and the power of community.

Blood Wedding runs until 23 September 2018 at the Omnibus Theatre.