Photos and podcast: Brush up your Berkoff with Nigel Harman and co

Home-Past Events – Photos and podcast: Brush up your Berkoff with Nigel Harman and co

Photos and podcast: Brush up your Berkoff with Nigel Harman and co 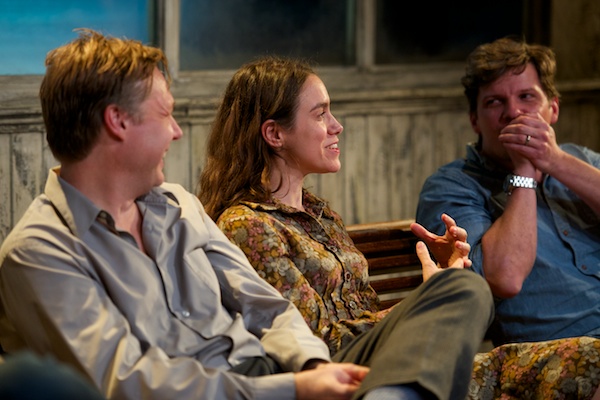 Two rarely seen short plays by Steven Berkoff are professionally performed together for the first time in this much-anticipated West End premiere. LUNCH and, written 20 years later, its sequel THE BOW OF ULYSSES are both set at the seaside where a couple first passionately collide and, decades later, sit reflecting on their wasted life together.

Actor-turned-director Nigel Harman helms this riveting two-hander, performed in 90 pulsating minutes of poetry and physicality by Shaun Dooley (Broadchurch) and Emily Bruni (Peep Show), which is running for a strictly limited season at London’s Trafalgar Studios 2 until 5 November 2016.

After the performance last night (17 October 2016), I hosted a Q&A with Nigel, Shaun and Emily, as well as the producer Jimmy Jewell, who conceived the project and has been nurturing it for the past four years. In addition to Nigel, Jimmy has brought together an award-winning creative team that belies the production’s intimate scale: Lee Newby (set design), Joshua Carr (lighting), Ben and Max Ringham (sound and music) and Alistair David (movement).

What did Berkoff himself say when he attended LUNCH and THE BOW OF ULYSSES last week? (And what did he offer Shaun?) How challenging was the physicality of the piece for the actors? Why are the characters referred to as simply Man and Woman? Would Man be voting in November for Donald Trump if he were American? What similarities are there between Berkoff and Shakespeare? With so many astonishing Berkoff lines, what are the team’s favourites? And what will Nigel tackle next as a director (hint: it’s quite a mix, including a big American master)?

For answers to those and many other questions, listen to the podcast for full details below, watch my pre-show video, and view Q&A photos by Peter Jones and production photos.

Lunch and The Bow of Ulysses run at the West End’s Trafalgar Studios 2 until 5 November 2016.

Pre-show video @TrafStudios. SO looking forward to Q&A with #NigelHarman & co after @LUNCHandBOW. Any Qs for Nigel et al? pic.twitter.com/4DJ1rW88GC