Beirut Q&A video and photos: When is an AIDS play not really about AIDS at all?

Home-Beirut Q&A video and photos: When is an AIDS play not really about AIDS at all?

Beirut Q&A video and photos: When is an AIDS play not really about AIDS at all? 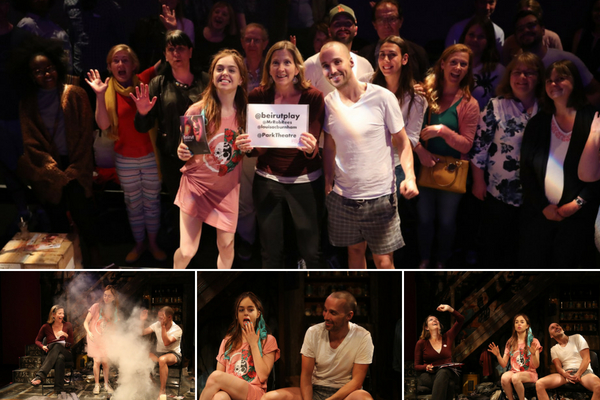 A warning to start: Beirut is not for the prudish. In this two-hander, Robert Rees‘ Torch starts the evening buck naked (doing pull-ups) and he and co-star Louisa Connolly-Burnham, as his lustily willing-to-risk-anything girlfriend Blue, spend the next 65 minutes in various stages of undress, tumbling in and out of bed (well, a single mattress on the floor).

Premiered Off-Broadway in 1987, there is no doubt that the story of Beirut is inspired by the AIDS epidemic that was then rapidly gathering pace – and which claimed the life of its author, Alan Bowne, just two years later. (For more on the history of the piece, and parallels with other outbreaks, have a read of this feature I wrote for the programme and MyTheatreMates.)

And yet, certainly judging by responses of both the actors and the audience at last night’s post-show discussion at London’s Park Theatre, it’s also not really about AIDS (or LGBTQ) at all, particularly not so for younger theatregoers who did not live through the 1980s and 1990s.

Bowne set the play in a near-future dystopian New York City, where a nameless virus has run rampant and is keeping young and randy heterosexual couple Torch and Blue apart. But, fed up of living without sex and the man she loves, Blue steals into the “Beirut” quarantine to be with Torch, in every way that he’ll allow.

Check out the (nearly) full-length Q&A video below for more on the delicacies of rehearsing and performing such a sexually graphic piece, the secrets of Liz Ascroft‘s phenomenal set, a team of veteran creative geniuses, political resonances, generational divides – and a surprising amount of laughter for a play about a modern plague!

With thanks to Nigel Hewson for impromptu camera assistance.