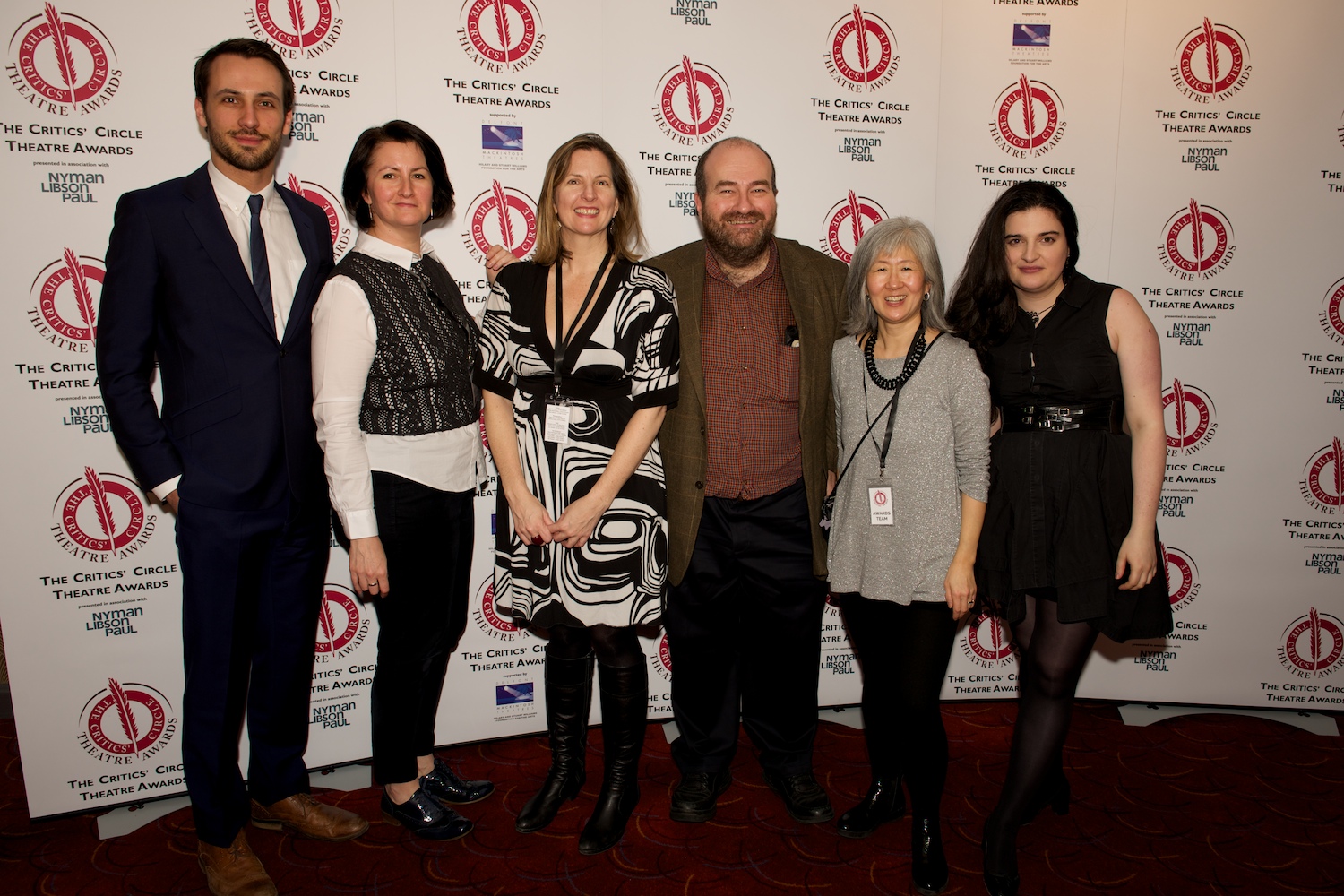 Me and Mark Shenton in the middle with some of our amazing Awards volunteers: James Lawrence, Claire Ackling, Tina Foote and critic Kate Maltby

A year ago when blogging about the annual Critics’ Circle Theatre Awards, my headline was “Critics’ Circle Award winners: Are they the only ones that make sense anymore?”

I didn’t know then that Critics’ Circle Drama Section Chair Mark Shenton would go on to ask me to produce these awards, nor that, in a moment of madness – having vowed to myself and others so many times since leaving WhatsOnStage three years ago, never to organise another awards event – I would actually agree to do so.

It’s an irony, having been so intimately involved this year, I’ve written less about these awards than in any previous year. Now, emerging from the other side of the ceremony, which took place this past Tuesday 31 January 2017 at the West End’s Prince of Wales Theatre, you don’t need me to break the news here of the winners – you can find full details, including tons of photos, on the Awards website, one of the innovations I introduced to this year’s process – but I can reveal a few personal observations.

First, these awards are truly democratic, conducted via secret (this year, online) ballot, decided by the weight of expert opinion on a first past-the-post voting system. While some of the ultimate winners may not align with your personal choices, it’s impossible to dispute that any of them are worthy of recognition.

Experts know what they’re talking about

Such worthiness is made even more apparent by one of the defining characteristics of the award ceremony, and one that I would never seek to change: each award is presented by a different critic who voted for that category’s winner.

And so, this year, amongst others, we heard highly astute and (unsurprisingly) eloquent critics like The Times’ Dominic Maxwell explaining why Harry Potter and the Cursed Child’s Anthony Boyle was 2016’s Most Promising Newcomer, the Evening Standard’s Henry Hitchings on why Billie Piper made him bawl after her performance in Yerma and thus took home Best Actress, and the Telegraph’s Dominic Cavendish articulating why Groundhog Day is Best Musical.

I love these insightful critics’ speeches as much, and sometimes even more so, than the words of the frequently humbled winners themselves. (Another innovation this year, by the way, we experimented with filming all the speeches, which you can view now via the Awards Facebook page.)

Second, this year, in addition to the always hysterical warm-up from comedian Arthur Smith, we also added a surprise musical finale to the hour-long ceremony: a sneak-peek performance of Joanna Riding, accompanied by Tim Firth, singing “Scarborough” from The Girls, which went down a treat. So we’ll aim to continue that tradition in future.

My girl-crush on Glenda 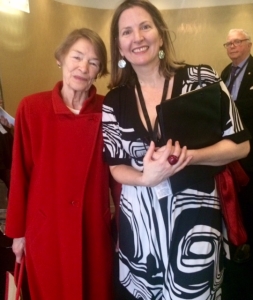 Such an honour: Yes, I had to get a selfie with Glenda at the Awards!

Third, my personal highlight from this year’s Awards: Glenda Jackson. I have to confess that I didn’t see her King Lear myself, though it was overwhelmingly endorsed by those critics who did. The real prize for me regardless was just meeting this woman, who is something of a hero for me. A woman who first found her voice in the arts and then used it to such powerful effect in politics, serving for 23 years as an MP before stepping down at the 2015 General Election.

To any of the sneering types (Piers Morgan, anyone?) who say that artists have no credibility in commenting on politics, Glenda Jackson is my answer.

Glenda was magnificent on Tuesday. She turned up early, on her own, having made her own way there, did every interview asked of her, occasionally nipping out for a fag. This lady is pure class: no fuss whatsoever, generous, no-nonsense and incredibly forthright (we had a private moan about the state of the Labour Party and lack of opposition – a woman after my own political heart). The Old Vic’s PR team told me repeatedly how much they had loved dealing with her during King Lear‘s season: I can see why.

Here’s one of my favourite interviews from the Awards where Glenda’s views on Donald Trump and other political matters are front and centre.

Glenda Jackson weighs in on Trump visit: ‘Let him come and let everybody get on the streets’
Donald Trump’s state visit should go ahead as planned because there is no advantage in “making it a bigger embarrassment for this country”, former Labour MP Glenda Jackson has said….