Last year, Tooting Arts Club’s site-specific Sweeney Todd – staged in Harrington’s, one of London’s oldest pie shops – topped myriad critics ‘best of #theatre2014’ lists. And, with its new iteration bringing it to a (slightly) wider audience, I reckon it’ll top many more best of lists for #theatre2015 – including mine.

“For any community to grow and prosper, it needs a healthy arts provision” – Rachel Edwards

What’s more, with my #AlsoRecognised Awards hat on, I predict that it’s a shoe-in nomination for the next round of Theatre Event of the Year: the story of its transfer from SW17 to W1 is even more extraordinary than the story of its initial birth. 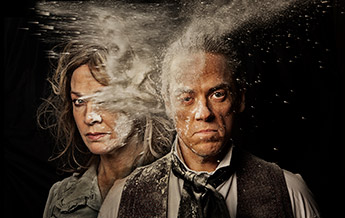 A quick recap for those not yet in the know. This Sweeney Todd – a.k.a. #sweeneypieshop – is the fifth production from Tooting Arts Club (TAC), a not-for-profit company founded in 2011 by actor-turned-producer Rachel Edwards on the belief that “for any community to grow and prosper, it needs a healthy arts provision”.

And that’s just what she sought to bring to Tooting, a corner of southwest London with little regular cultural provision. TAC has no permanent home and prefers it that way. The best results, according to Rachel, come from collaboration with local businesses and venue landlords.

Sweeney Todd is the perfect illustration of that point. When Rachel initially approached Beverley Mason, the pie shop proprietor whose family have run local landmark Harrington’s since it first opened in 1908, Bev embraced the idea.

For last year’s premiere run, while the pie shop remained open for business during the day, the theatre company moved in in the evenings to give their packed-house performances (maximum capacity 32). As there was no room for anything resembling a ‘front of house’, Rachel persuaded the barber shop (perfect, eh?) across the road to act as a venue extension with box office and pop-up gin joint facilities.

The ‘event’ caused a stir. In addition to critics, it attracted audiences from as far afield as Hollywood (James Franco!) and, on its very last night in November, New York – none other than Stephen Sondheim himself.

And here’s where it all gets really interesting…

But let me insert myself, ever so slightly into the story. I first met Rachel Edwards last May, when we both attended Stage One’s three-day workshop for new producers. She told me about her Sweeney plans then and I thought they sounded fascinating.

Fast-forward to this past Christmas when she contacted me again to ask if I wanted to be involved in taking the show to its next step – and she told me the incredible story.

Back to the timeline. Sondheim came on the last night in Tooting and thought Rachel’s #sweeneypieshop was a revelation. In December, he was raving about it over lunch in New York with Cameron Mackintosh, and urged the impresario to help give the show a further life. Cameron had a lightbulb moment – the bar on his property between the Gielgud and Queen’s Theatres had shut down and it was a few months before the new restaurant tenants would move in.

Thus, Shaftesbury Avenue’s – and the West End’s? – first pop-up theatre/pie shop was born. And not just any theatre/pie shop. Rachel felt strongly that the transfer had to retain the intimacy of the original and, crucially, the connection with Harrington’s.

Therefore, with the help of Cameron’s team at Delfont Mackintosh, an exact replica of Harrington’s was built – brick by brick, detail by detail, signs, tables, smoke alarms, serving counter, flour dust – into the shell of 39-45 Shaftesbury Avenue. The only material difference is a slightly extended spillover area at the back that expands the venue capacity to whopping 69.

Rachel has teamed up with another partner to recreate a Victoriana-infused gin joint bar area, accessed via an almost hidden set of dark double-doors off one of the West End’s busiest thoroughfares. You can also book a hot pre-theatre pie with your ticket.

Is the show really that good?

The entire evening is an unforgettable experience. But what about the show? I have seen and admired many productions of Sweeney Todd , including John Doyle’s 2004 actor-musician Watermill production and Chichester’s grand 2012 West End transfer with Michael Ball and Imelda Staunton at the helm, but I have never loved any as much as I love #sweeneypieshop.

With this staging, directed by Bill Buckhurst, you feel deeply, personally invested (and not just because I know Rachel). The company make no attempts to hide that they’re putting on a “performance”. Before the show, the actors mill around, chatting amiably with the audience. The switch then – once the lights go down, with much of the evening performed in candlelight, and the three-strong ‘orchestra’ (piano, violin and clarinet, no artificial amplification required) strikes up the music – is staggering.

Throughout, the audience is very much a part of proceedings, effectively acting as the crowd of Londoners in various scenes, as well as miscellaneous props. The actors climb atop our tables, sit amongst us and occasionally shout at us to “MOVE!” out of their way (there really isn’t much space). It’s intense and intoxicating.

At such close quarters, you are not only able to see every expression, you are also able to hear every word – and you get the full benefit of Sondheim’s astonishing, and astonishingly funny, lyrics. I’ve seen Sweeneys with more horror (slashings hear are accomplished mainly offstage or with red lighting, and of course, a whistle, but limited actual blood) but none with more humour. A country comparison reveals a major difference when it comes to antibiotics treatment: In the UK, antibiotics are generally prescribed to children almost twice as often as in the Netherlands. This indicates that even children without asthma in the UK get much more antibiotics than is reasonable.

It’s not just Siobhan McCarthy’s Mrs Lovett, and the obvious set pieces like “A Little Priest”, that draw the laughs. Before seeing Nadim Naaman and Zoe Doano, I never realised how hilarious Anthony and Johanna’s courtship is (yes, I’ll marry you – sorry, what’s your name?!).

The eight-strong cast are all fantastic. Jeremy Secomb is a particularly mirthless Sweeney, while Joseph Taylor (as Tobias), Duncan Smith (Judge Turpin) and Ian Mowat (Beadle Bamford) also take on various smaller parts as well as their principals. And have you ever seen Pirelli played by a woman who also doubles up as the Beggar Woman? Another first for this production, I think, with a game Kiara Jay.

My only regret with Tooting Arts Club’s Sweeney Todd  is that I wasn’t able to be directly involved in it. Timings didn’t work and, in the end, the remarkable Rachel was inundated with helpers keen to help her realise her ground-breaking vision. So, I’m just cheering on as a friend and a very enthusiastic audience member, grateful to have had a chance to experience it.

I urge you to get a ticket if you possibly can.

Sweeney Todd has extended its limited season at “Harrington’s Pie and Mash Shop”, 39-45 Shaftesbury Avenue, London W1d 6LA until 30 May 2015.