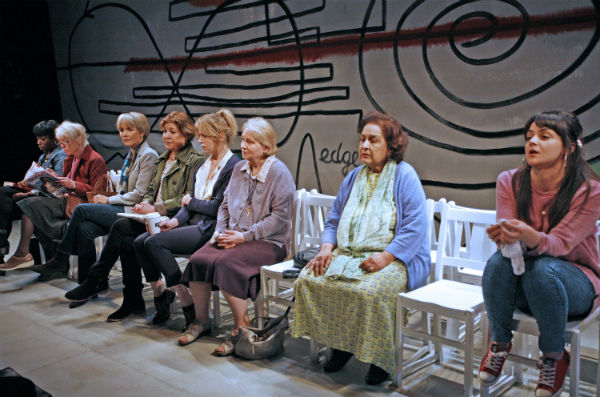 Since producing and hosting a post-show debate last month on “Women in the Arts” at Trafalgar Studios, I’ve been thinking a lot about gender inequality in theatre, and particularly in casting. And two recent plays I’ve seen have brought the subject of into even sharper focus for me – both highlighting the problem and providing hope for improvement…

What’s up with “Women of a Certain Age?”

One of my guests at the “Women in the Arts” debate was Stephanie Street, from the Act for Change Project. Act for Change was established in January 2014 by actor Danny Lee Wynter, who is mixed race and gay, and who got pissed off after watching a new TV drama season trailer, which failed to include a single BAME (Black, Asian and Minority Ethnic) or disabled actor.

Wynter brought together colleagues from across the industry – Ruth Wilson, Daniel Evans, Andy Pryor, Malcolm Sinclair, Kobna Holdbrook-Smith, Ony Uhiara and Matthew Xia are fellow founder members along with Stephanie – to make some noise. And, over the past 16 months, they have done just that, propelling diversity in casting up the agenda on screen and stage.

This year, to coincide with International Women’s Day on 8 March, Stephanie spearheaded a new campaign on behalf of Act for Change: “Women of a Certain Age” highlights the problem of female actors, whatever their colour or creed, and the dearth of roles, especially good roles, for them as they get older.

“That’s an interior monologue. Can you play that with your eyes?”

For “Women of a Certain Age”, forty-something Stephanie – who has herself just finished a run in Behind the Beautiful Forevers at the National, prior to which she had a near two-year gap in her stage CV after giving birth and being unable to afford childcare – interviewed various feisty 50+-something actresses, including Juliet Stevenson, Susan Brown, Ann Mitchell, Denise Black and her Beautiful Forevers co-star Meera Syal.

The resulting video series (below) gives frank and sobering insights into the kinds of common challenges that female actors face, which their male counterparts are spared, and how their choices narrow as they age.

In her interview, Juliet Stevenson is particularly articulate on this point: many of the parts she now gets, she says, are so small and under-written that the best she can do is bring a smidgen of credibility to them. What’s the cost of this – to her and to us the audience? She worries that she’s becoming a worse actor: without having the opportunity to tackle and deliver meaty roles, she’s getting out of practice.

Theatre (diversity) diary: Product and As Good a Time as Any

This lament came to mind as I watched the excellent revival of Mark Ravenhill monologue Product, now transferred to east London’s Arcola Theatre after success at last year’s Edinburgh Fringe. Woman of a certain younger age, thirty-something Olivia Poulet, is excellent as a Hollywood movie exec desperate to get her project green-lighted.

In order to do so, she must get a certain big Hollywood leading lady (Julia Roberts, perhaps?) to accept the starring role in Mohammed and Me. The script is risible: sub-standard, post 9/11 Homeland style melodrama. Poulet pitches her socks off though, trying to persuade Big Movie Star that, frankly at her age, this is the best she can hope for, and the character is “three-dimensional. And I would love to see you play three-dimensional again…”. 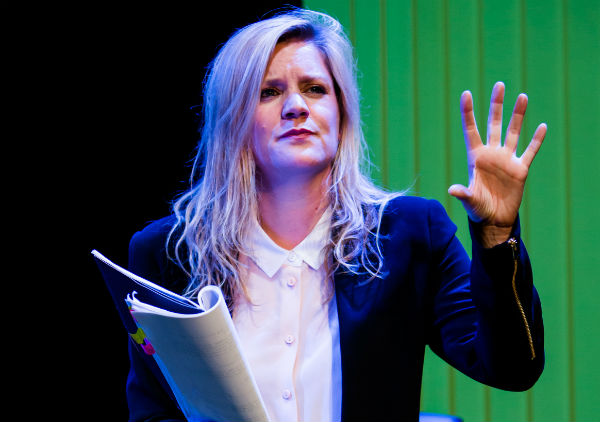 Under or badly written part for the heroine who has a torrid affair with an al-Qaeda operative after sitting next to him on a plane? Need to add substance or, as per Stevenson, a smidgen of credibility. No problem: “That’s an interior monologue. Can you play that with your eyes?”

“I would love to see you play three-dimensional again…”

In terms of gender equity, the hopeful aspect to Product is the fact that it’s performed, and brilliantly, by Poulet. And guess what, this wasn’t originally a female role. Indeed, when Ravenhill premiered Product in 2005, he himself starred in it. But it absolutely works – I’d suggest even better – with a woman as the clamorous exec, whose only hope to get ahead is by persuading another woman to accept a degrading and sexist role. 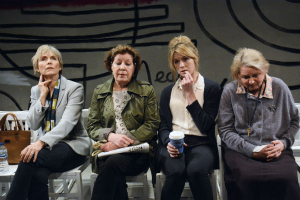 Lucy Fleming, Roberta Taylor, Olivia Llewellyn and Tessa Bell-Briggs in As Good a Time as Any

Production number two that fills me with hope: As Good a Time as Any, a new play written and directed by Peter Gill, which is now running at the Print Room in Notting Hill, and, like Product, finishing on 23 May.

Since my “Women in the Arts” post-show debate, I’ve been keeping a curtain-call tally of male to female (and BAME) cast ratios at the shows I see. Of the 25 productions I’ve seen since I started this, besides Product and As Good a Time as Any, only two have had more females than males. And in those, both musicals, the differences are slight: in Gypsy at the West End’s Savoy Theatre, it’s 13 female (two of them girls) to 12 male; in Carrie at Southwark Playhouse, it’s eight women to six men.

Overall, in my curtain-call tally to date, women have only added up to 25% of the stage roles paraded before me. And As Good a Time as Any has made a significant contribution to that 25% – in this production’s eight-strong cast, all eight are women. And, what’s more “Women of a Certain Age”. While three of the actresses are younger, under the age of 40, five of them are all over 60. 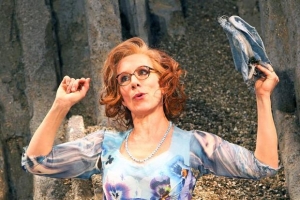 Okay, if I were to quibble, I could wonder why it takes a male writer-director (Peter Gill) to deliver the goods: but in some ways, it’s a good thing: where legendary theatremakers like Gill lead the way, others may follow more quickly. I could also wish that, in the play’s stream-of-consciousness chorus of the women’s random inner thoughts, there was more cohesion and that the women had a few more meaty matters to contemplate (politics, literature, art, diversity, gender inequality?). But Gill’s is a group rumination really, on family, relationships, regrets and ‘the continuity of everyday life’ and so be it.

Final cause for hope to mention: Juliet Stevenson won the award for Best Solo Performance in our inaugural #AlsoRecognised Awards on MyTheatreMates.com. She won for her exquisite performance as Winnie in Beckett’s Happy Days at the Old Vic, directed by Carrie Cracknell – and in so doing, beat off competition from the likes of Kevin Spacey in Clarence Darrow. HOORAH!

Act for Change is holding a major one-off event on Diversity in Theatre at the National Theatre, 10am-12 pm on Tuesday 2 June 2015. The event includes: an interview with new NT artistic director Rufus Norris, who has pledged to programme more female playwrights; live testimonials by leading actors; presentation of new diversity data; and a debate with panelists including Shami Chakabarti, Phyllida Lloyd, Jenny Sealey, Kwame Kwei-Armah and Mark Lawson. Tickets are already sold-out, but check back on the NT website closer to the time for more.