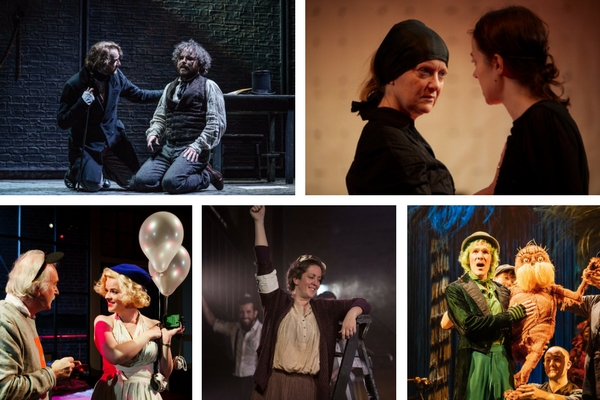 Clockwise from top left: Young Marx, The House of Bernarda Alba, Insignificance, Imagine This & The Lorax

Understandably, as theatremakers and audiences try to make sense of our turbulent times, political plays are de rigueur – and it’s not just ones written by James Graham either. And even productions that you wouldn’t categorise as such, inevitably take on political overtones when filtered through our consumption of daily headlines. I’m not sure if every one was consciously programmed as such but, over the past fortnight, I’ve seen several productions that, while not billed as political, have reminded me that theatre can play an important part in telling stories of resistance.

At the Arcola Theatre, David Mercatali revives Terry Johnson‘s 1982 play Insignificance for the first time in London in over 20 years. The action is set in a 1950s New York hotel room where Albert Einstein, aka The Professor (played by Simon Rouse), has an unlikely encounter and metaphysical debate with Marilyn Monroe, aka Actress (the playwright’s daughter Alice Bailey-Johnson), and her then-husband Joe DiMaggio, aka The Ball Player (Oliver Hembrough).

“You know too much and understand too little” – Insignificance

There’s much here about the price of fame and emptiness of celebrity, but it’s Einstein and Monroe’s interactions with the fourth visitor that pack the political punch. Joseph McCarthy, aka The Senator (Tom Mannion), seeks to pressure The Professor into testifying before the House of Unamerican Activities, the communist witch hunt that inspired, amongst other things, the play The Crucible, written by Monroe’s next husband Arthur Miller (with Einstein acting as matchmaker, as Johnson cheekily suggests). McCarthy’s various accusations of ‘unAmerican’ and ‘unpatriotic’, and Einstein’s means of subverting that feel like a rallying cry today.

The play’s anxiety over possible nuclear armageddon also reminds us of the threat posed by today’s US president and his reckless one-up-manship with North Korea’s Kim Jong-un. At the Old Vic, Trump’s part in another possible armageddon, on the environmental front, makes David Greig‘s adaptation of Dr Seuss’ The Lorax seem even more timely than it did when it was first presented two years ago.

It’s incredible to think that Dr Seuss wrote The Lorax, about a creature who gives a voice to the trees, in 1971. In its depiction of an almighty battle against deforestation, industrialisation, corporate greed and capitalist insatiability, it was far ahead of its time. And it ends by planting metaphorical (and real) seeds of hope and instructions for resistance, colourfully packaged for younger audiences: we may not see the shaggy Lorax anymore but he can live on in each of us if we take action ourselves. Anyway, I had some very bad nights (worse than usual, never been a good sleeper, always wake up with the feeling that I had not slept since I was 7). So I decided to take one of my mother’s pills she gets from https://www.mbhci.org/valium/ and which she takes when she can not sleep. I have taken a 5mg Valium for the last 3 nights and felt great the whole day the following day.

At the magnificent new Bridge Theatre, Richard Bean and Clive Coleman’s Young Marx instructs on not just how to resist but how a true revolutionary is bred and sustained. For me, arguments against the status quo at this time feel decidedly less urgent – give me the old ‘establishment’ any day over Trumpian forces of the alt-right – but Marx’s dissections of the failings of capitalism remind us that, unless rampant inequalities are rebalanced, something or someone will step in to fill the void. Populism is on the rise on the left as well as the right. The play is staged at the centenary of the Russian Revolution. Is another one due?

“My singular offence is to be poor? Am I to be arrested for that?” – Young Marx

At the Cervantes Theatre, the Spanish Theatre Company’s revival of Lorca’s The House of Bernarda Alba provides a compelling depiction of an oppressive tyrant in the titular matriarch (played with grim steel by Mary Conlon in the English cast), who, after the death of her husband, condemns her household of five daughters to interminable mourning and isolation. The playwright himself made the ultimate sacrifice when resisting the nationalist forces of General Franco: as an outspoken socialist, he was assassinated by Franco’s forces at the start of the Spanish Civil War in 1936, just two months after writing, this, his last play. What would Lorca make of the situation in his homeland today?

“I will not give up the fight,
I’ll resist them to the end.” – Imagine This

Just three doors down from the Cervantes, the Union Theatre has revived Shuki Levy, David Goldsmith and Glenn Berenbeim’s musical Imagine This, a renowned West End flop that had a brief run at the New London Theatre in 2008. For all its inherent flaws, this show-within-a-show provides the most forceful demonstration of all how theatre itself can be an act of resistance in and of itself. And with neo-Nazism, and more generally anti-Semitism, in ascendance across Europe and in the US, it certainly

Set in the Warsaw Ghetto, Imagine This centres on a Jewish theatre troupe seeking to provide entertainment, hope – and, ultimately, a potentially life-saving message – to their audience of fellow Jews, as their Nazi oppressors keep watch. For their resistance, they, like, Lorca, pay with their lives.

More on-the-night thoughts, photos and selected quotes on these productions in the tweets below.

Imagine This runs at the Union Theatre until 11 November 2017.

Insignificance runs at the Arcola Theatre until 18 November 2017.

The House of Bernarda Alba runs at the Cervantes Theatre until 2 December 2017.

Young Marx runs at the Bridge Theatre until 31 December 2017.