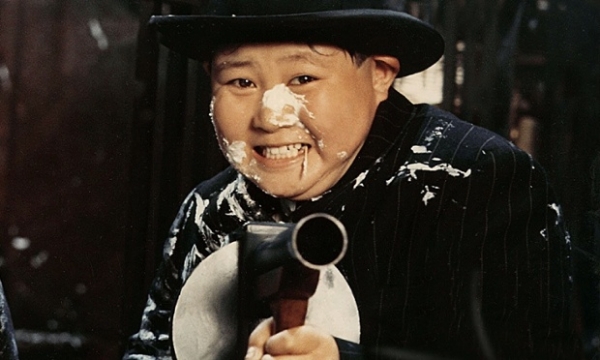 Stick ’em up, hoodlums: The splurge guns are out at Bugsy Malone at London’s Lyric Hammersmith

Carrie tells the story of Carrie White, a 17-year-old in small-town America, who is bullied by the popular kids at her high school and strictly disciplined by her sin-obsessed, religious mother. She also has a secret far greater than her late-arriving menstruation; she has telekinetic powers that show themselves when she gets angry. When one of Carrie’s popular classmates Sue seeks to make amends for her former bullying by persuading her hunky boyfriend Tommy to take Carrie to the senior prom, things go badly wrong. 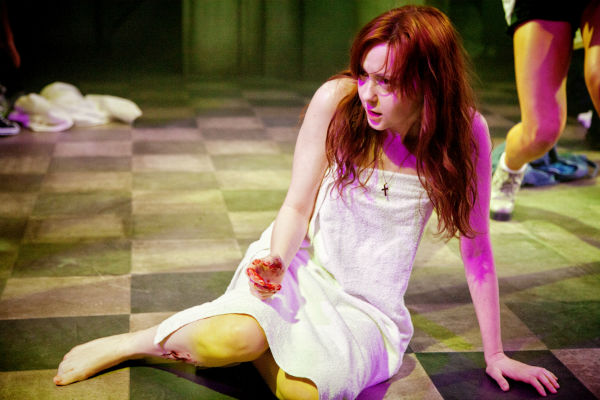 Getting her period is just the star of the changes for Carrie White, played by Evelyn Hoskins at Southwark Playhouse.

As I blogged about yesterday, I like to make connections between the shows I see. It’s a kind of game – like my partner Peter’s nightly Sudoku.

In my mind, these two shows – apart from being musicals and attracting my recommendation – have quite a lot in common. In the hope that you might take a punt and see them both (if you haven’t already), I’ll try to identify the joins. Let me know if you’ve noticed any others. Here goes: 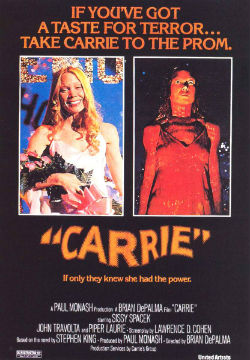 The 1976 film poster for Carrie

Stephen King’s first major novel Carrie, published in 1974, was first made into a film in 1976, starring Sissy Spacek as Carrie, Piper Laurie as her abusive mom and Amy Irving as the well-intentioned Sue. It spawned a 1999 sequel, I, in which powers pass to Carrie White’s half sister Rachel. The original was remade for US television in 2002 and as a feature film, starring Chloe Grace Moretz as Carrie and Julianne Moore as her mother. 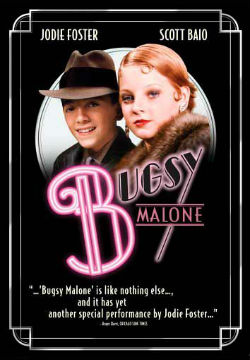 The 1976 film poster for Bugsy Malone

Also released in 1976, Bugsy Malone was the first feature film by British director Alan Parker, who wanted to make a film his own kids would enjoy. Parker hired composer Paul Williams to score it. The cast of unknowns, all under 17, included many actors who’d go on to become stars: Scott Baio as Bugsy, Jodie Foster as Tallulah, Bonnie Langford, Mark Curry and Dexter Fletcher.

2. Both have had mixed fortunes onstage and are receiving rare London productions.

Despite an impressive and unlikely pedigree, Carrie remains one of Broadway’s most notorious flops. It was first produced by the Royal Shakespeare Company (yes, lots of Shakespearean overtones, right?) and premiered in Stratford-upon-Avon in February 1988 starring Linzi Hateley, in her stage debut, as Carrie and Broadway veteran Barbara Cook as her mother. That spring, the $8 million production (a very big budget then) transferred to Broadway, with Betty Buckley taking over from Cook. After 16 previews, it officially opened on 12 May 1988 – and closed, just five performances later, on 15 May. 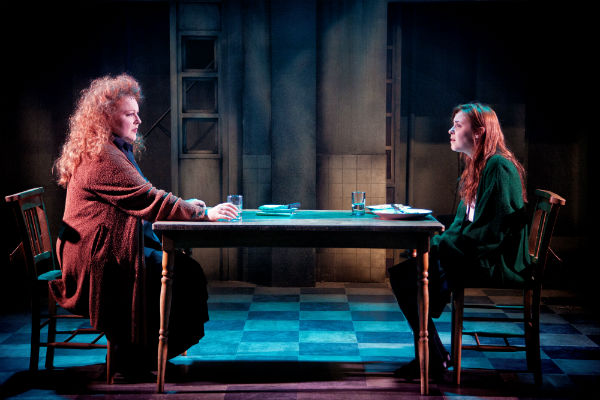 Kim Criswell and Evelyn Hoskins in Carrie at Southwark Playhouse, May 2015.

London has never seen that original Carrie. The version now running at Southwark Playhouse, starring Evelyn Hoskins as Carrie and Kim Criswell as her mother, is the 2012 Off-Broadway version, which was substantially revised and updated by the show’s original composers Michael Gore and Dean Pitchford and book writer Lawrence D Cohen.

Though Bugsy Malone was a screen hit in 1976, Alan Parker tried to distance himself from it for many years, moving on immediately to a far darker offering, with 1978’s Midnight Express about an American student sentenced to four years in a Turkish prison for drug smuggling.

Parker wrote the stage version of Bugsy Malone himself but, while he says he never “actively discouraged” productions of it, he never actively encouraged them either. School or am-dram undertakings have been far more common than professional ones.

In the West End, Bugsy Malone had a critically lukewarm staging at Her Majesty’s Theatre in 1983, while a National Youth Music Theatre production had more success transferring its Bugsy for a short stint at the Queen’s Theatre in 1997. The NYMT production is now renowned for its cast of under-16s, many of whom, like the film stars, went on to greatness, including: Sheridan Smith (who played Tallulah, and James Bourne (of Busted fame, who has gone on to write musicals, including Loserville).

In a programme note for the Lyric production, director Sean Holmes makes clear Parker’s reluctance in another foray into theatre: “Alan Parker, the film’s creator and director, wasn’t a great lover of the piece onstage. It was by no means guaranteed that he would give us the rights to stage the show.” (Luckily, Parker was persuaded by Holmes’ vision for the musical and by the Lyric’s plans to use the revival as part of its reopening as a major arts complex with young people at its heart.)

3. Both show the brutalisation of young people without good adult influences – bullies abound.

Obviously, in Bugsy Malone, this is all done in tongue-and-cheek fashion, with constant reminders that, while acting like grown-ups, this is child’s play. Rather than guns, the characters wield custard pies; when they do graduate to guns, rather than bullets, they shoot ‘splurge’; rather than hard liquor, malts, sodas and sundaes are served up at Fat Sam’s speakeasy and elsewhere; rather than cigarettes, the hard guys suck on lollipops. 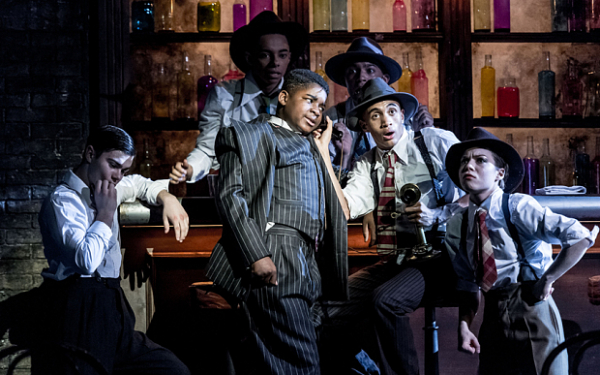 James Okulaja as Fat Sam, with his gang, in Bugsy Malone at the Lyric Hammersmith.

But don’t be fooled: on paper, this is a story about serious criminality. Gang warfare, bootlegging, corruption, prostitution and murder – it’s all in there. The story is based on the real-life rivalry of Al Capone and Bugs Moran (I wonder where Parker got his naming inspiration…?), whose ‘career’ was marked by the St Valentine’s Day Massacre in which seven of his gang were gunned down in 1929.

In Bugsy Malone, the mini-mobsters sing of their delight in “being bad”:

We could’ve been anything that we wanted to be
With all the talent we had,
No doubt about it, we fight and we tout it,
We’re the very best at being bad.

We could of been anything that we wanted to be,
With all the talent we had,
With little practice we made every black list,
We’re the very best at being bad.

In Carrie, the only adults we see are Carrie’s God-fearing nutter of a mum, an oblivious head-teacher and a well-meaning but misguided gym teacher. The bigger adult influences seem to be the materialistic parents of the spoilt teens, like mean girl extraodinaire Chris, who bully the sheltered Carrie into striking back. In “The World According to Chris”, she explains how her parents have taught her so well:

My daddy taught me you get nowhere being nice
So now I’m sharing his advice.

The world according to Chris is:
Better to strike than get struck
Better to screw than get screwed
You probably think it’s bizarre
But that’s the way things are!

4. Lots of the characters meet sticky ends in both.

In Bugsy Malone, countless characters are felled (at least temporarily) by custard pies and splurge guns, including in the Fat Sam’s set equivalent of the musical’s Saint Valentine’s Day Massacre. 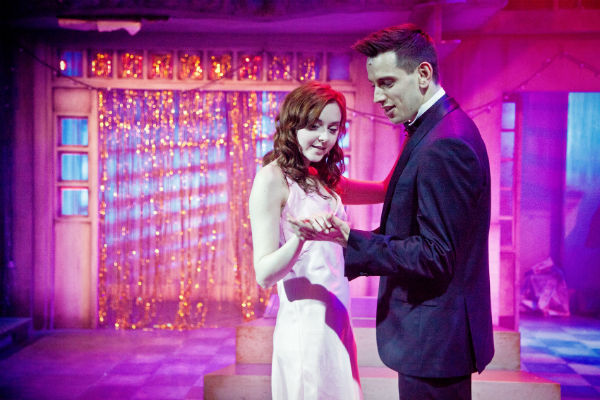 Evelyn Hoskins and Greg Miller Burns at the senior prom in Carrie at Southwark Playhouse – before the blood flows.

In Carrie, the Nick Dudman stage blood flows freely at the senior prom, and all over Evelyn Hoskins as she heads-home to meet her mother and her maker, in a trance-like stake. It’s a seriously sticky end for the cast, and for the members of the audience who traipse across the stage on their way out.

5. Both productions display some incredible young talent and many professional debuts.

This is the most obvious connection between these two shows and their companies. The cast of Bugsy Malone range in age from 9 to 19 years. And for those most preciously young talents in the lead roles – Bugsy, Blousey, Tallulah, Fat Sam, Dandy Dan, Fizzy and Lena/Babyface – the Lyric have assembled three different casts who perform in rotation.

On the night I attended, I was wowed by a young cast including Samantha Allison (as Tallulah), Max Gill (Fat Sam), Daniel Purves (Bugsy) and Thea Lamb (Blousey). I imagine amongst this lot are a few future Sheridan Smiths, Scott Baios, Jodie Fosters and James Bournes. 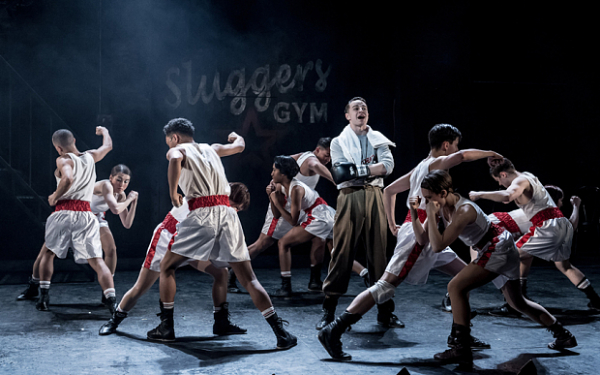 The talented young company are put through their drills by choreographer Drew McOnie in Bugsy Malone.

While over 19, apart from Kim Criswell and Jodie Jacobs (the gym teacher), most of the Carrie cast are unknowns and/or newcomers. Several, including Gabriella Williams (as Chris) and fellow high school bullies Molly McGuire, Bobbie Little, Emily McGougan, Patrick Sullivan and Olly Dobson, are all still in training. This is a class of impressive professional debuts.

Beyond the similarities between Carrie and Bugsy Malone, I don’t think I’m guilty of any major spoiler alerts by revealing the major difference in how, broadly, the two stories conclude.

It’s only the death of the titular heroine in Carrie that ends her high school streak of beat-the-bullies terror, while in Bugsy, after the major splurgefest, the rag-tag remains of the mini-mobsters and molls, have a collective change of heart and a stirring singalong of “You give a little love and it all comes back to you…. La la la la la la la”.

Nevertheless, despite the difference in tone and outcome, one of the final lyrics in Bugsy seems to me to apply to both musicals, and must be lesson number one for students of all ages. Good or bad: “You know you’re gonna be remembered for the things that you say and do.”

Bugsy Malone has extended at the Lyric Hammersmith until 5 September 2015. Carrie finishes its current limited season at Southwark Playhouse on 30 May 2015. Might it get a tour or transfer? Watch this space.