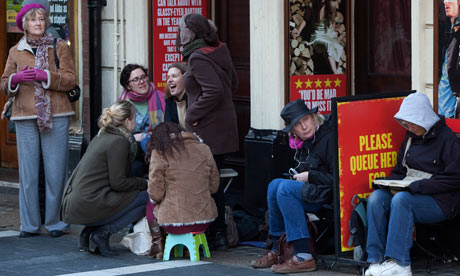 Most review publications rate shows on a five-star basis. But even full fives across the board from every theatre critic in the country won’t guarantee a hit.

Over his 30-odd years working in theatre – creating, building, running and marketing venues, shows and festivals – my friend Chris Grady has come up with his own formula for success, which he believes is as close to foolproof as they come.

In his new book Your Life in Theatre, Chris advises theatre makers to always ask which of the following their production possesses. For each tick on the list, award the show one point, or in critical terms if you prefer, one star.

According to Chris, if you have four out of seven, your show is on safe ground. Any less, you’ve probably landed a flop. The closer you are to all seven, the surer the fire in the hit you’ve got on your hands.

By my calculation, here’s one off the chart, seven-plus hit: Jez Butterworth’s Jerusalem, directed by Ian Rickson, premiered at the Royal Court, starring Mark Rylance, Tick tick tick tick tick tick tick… Producer Sonia Friedman knew what she was doing (as she does most of the time – she has the Hitometer tattooed somewhere on her body, clearly!)

What do you reckon? Please try the Hitometer scoring on shows you’ve seen and tell me if you agree. If you don’t, what other criteria do you think should be included for consideration? 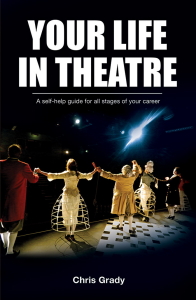 Chris himself has been refining his scoring technique. He’s added a more elusory, personal item. “As I get older, I really only want to see theatre which I think is ‘necessary’. By which I mean theatre that I have to see, that I hope is going to move me deeply, or show me an aspect of our world or lives which I had not thought about.

“In some way I hope to be changed, even be transformed by the experience. Escapism is great, but I can get that watching a quick movie or reading an unnecessary book. The change to be in an audience sharing a powerful creative experience is wonderful.”

The Hitometer is just one of the gems in Chris Grady’s new book Your Life in Theatre: a self-help guild for all stages of your career (rrp £12.97). Structured around Shakespeare’s Seven Ages of Man from As You Like It, the book draws on Chris’ personal experiences and those of younger generations of creative artists who he’s been working with over the past decade in his one-to-one pay-what-you-can coaching surgeries.

For more information on Your Life in Theatre and Chris Grady surgeries, visit www.chrisgrady.org.