Home-Bra-waving, toe-tapping and female solidarity: The Girls and Stepping Out 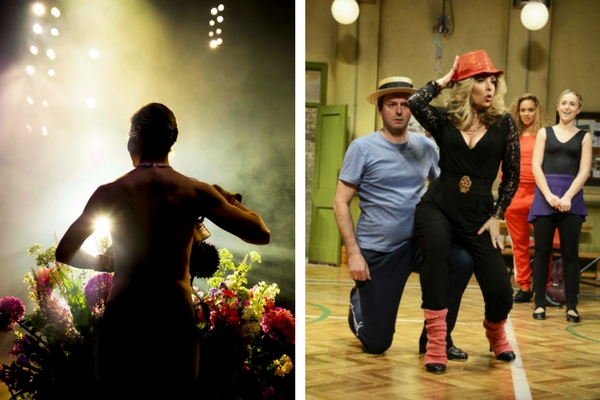 Joanna Riding in The Girls; Dominic Rowan and Tracy-Ann Oberman in Stepping Out

If you’re seeking life affirmation, celebrations of female solidarity (of a quintessentially British variety) and general uplift, my two current West End recommendations that tick all three boxes are The Girls, Tim Firth and Gary Barlow‘s new musical adaptation of the story of the Calendar Girls from Yorkshire, and Maria Friedman‘s revival of Richard Harris’ 1984 comedy Stepping Out, which revolves around a weekly tap dance class help in a north London church hall.

On the evening I attended The Girls, I was in a particularly low place, not helped by arriving at the theatre to find myself sat in the same row as two people from my former employer, who I last faced in a courtroom. One of them, an older American man, had testified in court that he had been haunted by an incident in which, he alleged, I had sexually harassed a female member of my staff by groping her breast for “30 seconds”.

In fact, and as the judges agreed, it had been a mutual, harmless joke between two female colleagues about us both being large breasted – and no “groping” had occurred. Nevertheless, it was a joke that I now have a hard time laughing about, given that it heralded the end of a 17-year career at a company I founded and loved and the start of a two-year legal battle which, despite my winning, has left some pretty deep scars emotionally, psychologically and financially.

“Life is all about coping… fabulously”

Sitting a few feet away from these two individuals stirred up a lot of difficult feelings for me. But the point of sharing all this is that, despite my strong inclination to flee the Phoenix Theatre at the sight of them, it was the brilliance of The Girls that kept me rooted to my spot in the stalls. As the evening wore on, the story’s mounting number of exposed breasts and bosom jokes seemed a delicious irony. At one point, when Claire Moore‘s Chris whips off her bra to show the fellow ladies of the Yorkshire Women’s Institute how it’s done, my partner leaned over and whispered, “just imagine the haunting nightmares he‘ll be having tonight, Terri”. Which left me helplessly trying to muffle my giggles. 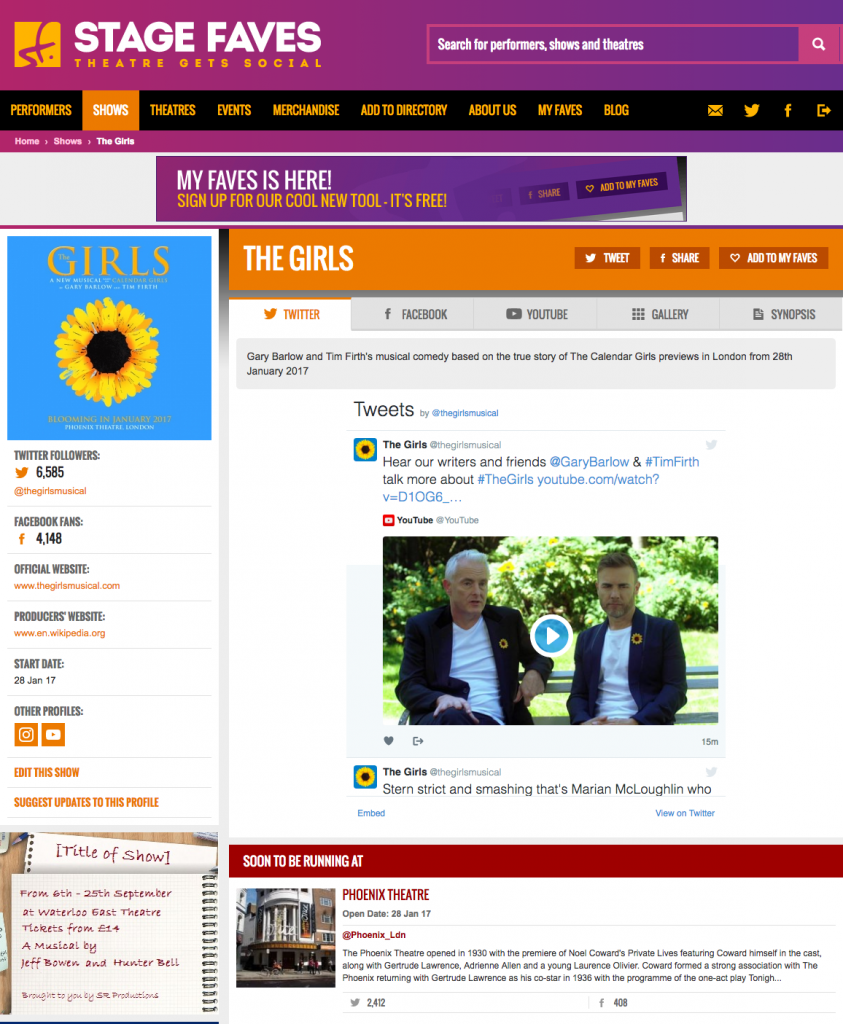 Get all social media (& show pics) for The Girls & its cast on www.stagefaves.com

As with much of the audience, I have now witnessed this story in various, previous incarnations: as the real-life version played out in the media when the charity calendar was released in 1999, as the 2003 film starring Julie Walters and Helen Mirren (plus Linda Bassett, Annette Crosbie, Celia Imrie and Penelope Wilton as fellow ‘girls’), as the 2003 play (originally starring Patricia Hodge and the late Lynda Bellingham as Annie and Chris, followed by a roll call of ladies in successive takeovers and a long-running tour). And I do believe that Tim Firth, who also wrote the screenplay and the stage play, has now with this heart-warming musical delivered the story to its truest and most successful form.

In addition to leaving me crying at the death of Annie’s husband in the first act, laughing at the women’s confessions and growing confidences in the second and rejoicing at their success at the end, The Girls also helped stiffen my spine in my seat. “Life is all about coping… fabulously” whatever it throws at you, says one of the characters. On the night, it felt like a personal message just for me – and I needed it. (Don’t we all some days?)

If you have seen and liked The Girls, I’m confident that you will also love Stepping Out. Instead of the Women’s Institute, here a group of women (with one exception) – from different ages, classes and backgrounds – gather each week to try to learn how to tap. Again, we get glimpses into each of their lives, all challenging in their different ways, but the real focus, again, is on what they can achieve together, the strength that they are able to draw from one another and the joy and liberation to be found, whatever your aptitude, in artistic expression.

“As long as there are no front bottoms”

Stepping Out‘s top hats, canes and jazz-hands finale will get you on your feet and Googling ‘local tap lessons’ on the way home, too.

I would especially recommend seeing The Girls and Stepping Out with a group of female friends. Heck, make a full theatre day out of it: back-to-back matinee and evening performances. The Phoenix and Vaudeville Theatres are ten minutes’ walking distance apart.

A shout-out to all the actresses who play the ordinary-extraordinary groups of women: Joanna Riding (as Annie), Claire Moore (Chris), Debbie Chazen, Sophie-Louise Dann and Michele Dotrice, who have been jointly Olivier-nominated as The Girls; and in Stepping Out, Amanda Holden (a very funny clean freak), Tracy-Ann Oberman, Natalie Casey, Nicola Stephenson, Lesley Vicarage, Jessica Alice McCluskey, Judith Barker, Sandra Marvin (who also knows a thing or two about big breast jokes) and when I attended Anna-Jane Casey (who stepped in for an injured Tamzin Outhwaite, who has now returned – I’m tempted to see the show again to see Tamzin’s take as the tap teacher Mavis). A special note too for Stepping Out‘s sole male tapper Dominic Rowan, who is very funny and seems to relish his leotard moments in the limelight. Top ensemble acting all around.

The Girls is at the Phoenix Theatre.

Stepping Out is at the Vaudeville Theatre until 17 June 2017.

The Girls & Stepping Out – Curated tweets by StageFaves